Jobs have been the U.S. economy’s bright spot for several years. Low unemployment and increasing wages have propelled the expansion to a record 10 years. But, the COVID – 19 Pandemic has plunged the economy into a recession. Now the jobs picture is bleak and will determine if the recession will be short or long. Economic turmoil mounted as March progressed. Most of the data summarized in this blog precedes the economic collapse and will worsen in April.

Millions of Americans are seeking financial assistance. Approximately ten million people lost their jobs and applied for unemployment insurance during the last two weeks of March. Another 11.8 million applied in the first two weeks of April. Still more people lost their job but were unable to apply because the system was overwhelmed. Congress responded quickly by passing a $2 trillion assistance package to lessen the economic hardship and pump money into the economy. (More on this in the summary.) How much will the real gross domestic product (RGDP) decrease? Predictions vary, but most economists agree the second quarter's drop will exceed 20%.

The stock markets were volatile. In March, the Dow Jones Industrial Average had 12 1,000+ point swings between the close of one day and the next trading day's closing index; five days were down, and seven were up.

Economic growth was unchanged at 2.1% in 2019's fourth quarter, according to third estimate released by the BEA on March 26th. The report’s highlights are listed below. Readers can access the report at Gross Domestic Product, Fourth Quarter 2019, Third Estimate. The BEA will release its advanced estimate for the first quarter of 2020 on April 29th. It will be the first BEA estimate to include the pandemic, but it will only reflect the final two weeks of March.

This report preceded the impact of the coronavirus but remains important because it provides a reference point. Real Income continued to rise at close to its fastest rate since the end of 2018. Personal consumption expenditures increased modestly in February. Inflation as measured by the PCE price index increased. Read the Commerce Department’s full report by following the link Personal Income and Outlays, February 2020. The highlights are listed below. 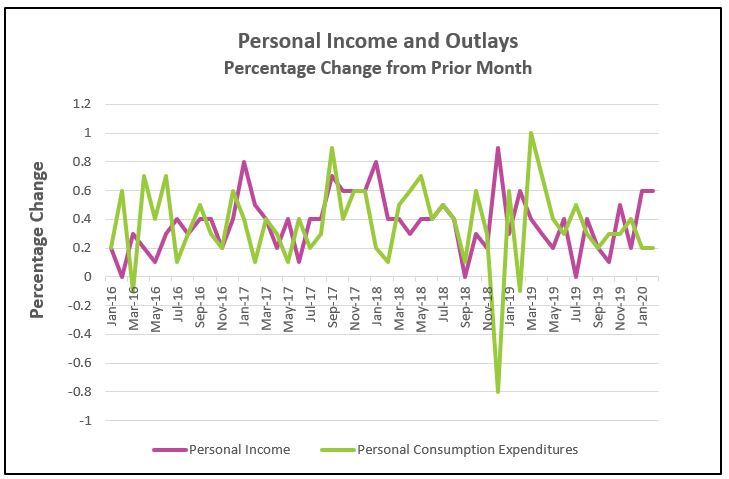 March prices decreased sharply following a drop in aggregate demand caused by the onslaught of COVID-19. A price war between Saudi Arabia and Russia over crude oil also contributed to reduced prices by pushing oil prices to their lowest levels since 2002. Read the full report by visiting Consumer Price Index – March 2020. Here are the highlights. 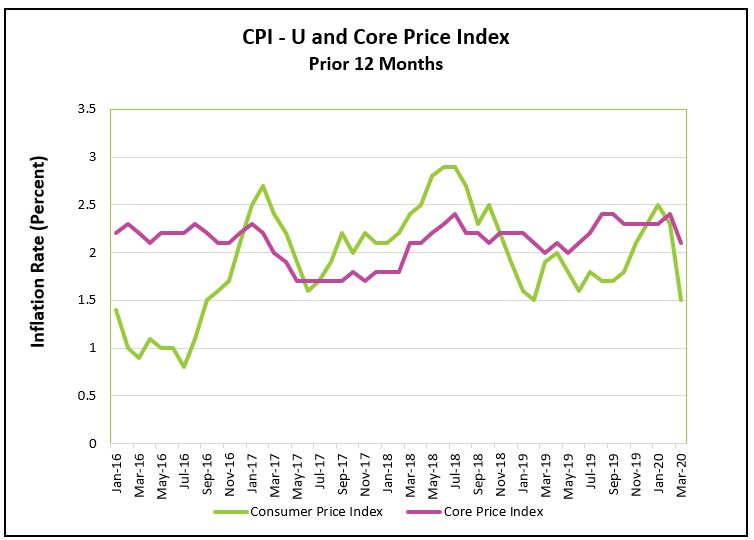 The 113-month run of continuous months with job increases ended in March. Furthermore, much of the data for the March report was collected in the second week of March which precedes government measures to constrain the onslaught of COVID-19. In separate reports the Department of Labor reported that almost 22 million filed for unemployment claims in the last four weeks. Highlights from The Employment Situation – March 2020 are listed below. 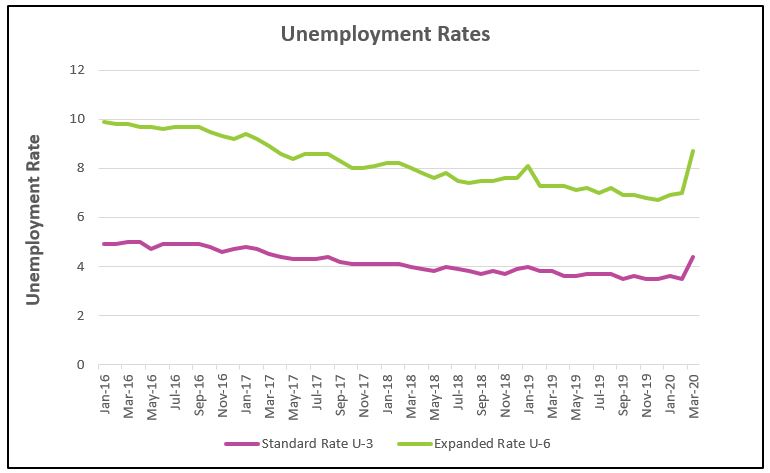 During the last two weeks of March the NCAA cancelled all its remaining tournaments for the 2019-20 academic year, most professional sports leagues suspended their seasons. Even Broadway and Disney shutdown. “Social distancing” wasn’t in most of our vocabulary until recently. Now we're constantly reminded that it can save lives.

Economic forecasts are tenuous because there are so many uncertainties. How much will social distancing prevent the spread of COVID-19? Will consumers remain fearful of travelling or meeting in public places such as restaurants or arenas? How effective will government assistance programs be in minimizing business closures and helping households meet their needs? The answers to these questions will influence how quickly businesses are willing to increase production and rehire workers. They will also influence when consumer spending returns to pre-COVID-19 levels. For the past few years, a confident consumer has carried the economy. Consumer spending has accounted for approximately 70% of economic growth. The University of Michigan’s Index of Consumer Sentiment suffered the largest drop ever recorded in early April largely because of the coronavirus pandemic. How the consumer responds in the next few months will largely influence how quickly the US economy rebounds from the current downturn.

Unemployment climbed to 4.4% in March, but there is no doubt the rate is understated. Industries with demands directly tied to the constraining measures imposed by governments were the hardest hit. Restaurants and bars attributed for 417,000 of laid off workers in March. Hotel workers also suffered a large layoff. A prolonged shutdown would eventually adversely impact the demand for most goods and services because households and businesses will have less money to spend. Most economists agree, the unemployment rate will climb to between 12% and 20% in the second quarter. Predictions and sources are listed in the table below.

Recent surges in layoffs have pressed Congress into passing the Coronavirus Aid Relief, and Economic Security (CARES) Act. Included are rebates to low and middle-income families, an expansion of unemployment benefits, and $150 billion to assist states and municipalities. Unemployment would be even greater if not for The Paycheck Protection Program which provides businesses with short-term loans to assist struggling companies with the liquidity needed to endure the shut-down. Employers have an incentive to continue paying their workers even though they are not working because the loans will be forgiven if companies continue to pay workers for eight weeks. In addition, the program reduces the cost of unemployment insurance while providing employers with the ability to get back up and running promptly when the pandemic ends.

The Federal Reserve also responded to the crisis promptly by implementing an aggressive monetary policy by earmarking $2.3 trillion to support lending to make loans easier to secure for businesses, consumers, and governments.

How bad will the economy get? Everyone agrees unemployment will increase substantially and the second quarter of 2020 will be the largest recorded quarterly contraction. But most analysts believe the economy will rebound nicely in the second half of the year. How quickly will Americans return to work? Most economists agree that when Americans return to work many will be hired immediately, but there will also be a gradual return to normalcy. Fear deters hiring and purchases. Even after the restrictions have been lifted many consumers will remain reluctant to travel, visit restaurants, or attend the theater or sporting events. Some businesses will be slow to rehire fearing a second surge in coronavirus cases.

Economic growth is expected to resume in the third or fourth quarter, but most experts believe the recovery will not be enough for the US economy to grow in 2020. The table below lists projections from reputable sources for the peak unemployment rate, how much RGDP will contract in the second quarter, and for all of 2020. Links to the sources are provided under the numbers.

The price level fell in March and is expected to fall even more in April. Deflation is not an immediate concern, but it could slow any recovery if it is prolonged. Economists fear deflation because consumers and businesses may choose to delay purchases, expecting the price of a good or service to be lower tomorrow.

Chairman Jerome Powell provided optimism on April 6th in his speech Covid-19 and the Economy, “There is every reason to believe that the economic rebound, when it comes, can be robust. We entered this turbulent period on a strong economic footing, and that should help support the recovery.”.