The May reports are in. The economy continues to grow. Consumers continue to benefit from lower prices and an increase in consumer confidence. They are the primary drivers behind a growing economy. Wage growth continues to be surprisingly slow because of the low unemployment rate and the shortage of workers. However, wages did increase more than the inflation rate. The core inflation rate remains below the Federal Reserve's target of 2.0 percent, but most economists (myself included) do not believe it is enough to deter them from increasing the Federal funds rate when they meet June 13th and 14th.

The United States real gross domestic product, the most common measure of economic growth, increased 1.2 percent in the first quarter of 2017, according to the Bureau of Economic Analysis (BEA). This figure is an annual rate and adjusted for inflation. The rate has been revised upward 0.5 percent from the advance estimate provided in April. Growth in the first quarter lagged behind the 2.1 percent pace in the final quarter of 2016. The figures for nonresidential fixed investment and personal consumption were adjusted higher, while state and local government spending was less than the advance estimate.

The slow growth could also be partially explained because the seasonal adjustments do not provide an accurate picture of the first quarter. Note on the graph above that first quarter growth appears abnormally low in most years shown on the graph. Many economists believe the figures are not a true reflection of the first quarter's growth and call the difference "residual seasonality". The BEA describes residual seasonality as "when seasonal patterns remain in data even after they are adjusted for seasonal variations."

Consumers are spending! (BEA – Personal Income May 2017 Report) The March figure for spending was revised upward to 0.3 percent and April's figure was a robust 0.4 percent. (The report published at the end of May is for April.) This was expected since winter sales were held down by weather and income has also been increasing since the beginning of the year. Personal income rose 0.4 percent in April. Consumers continue to gain confidence, and this is reflected in their spending. The consumer confidence index was released on May 30. Consumers should be upbeat. The economy is growing, inflation is low, unemployment is at record lows, and finally, incomes are beginning to rise at a rate faster than inflation. 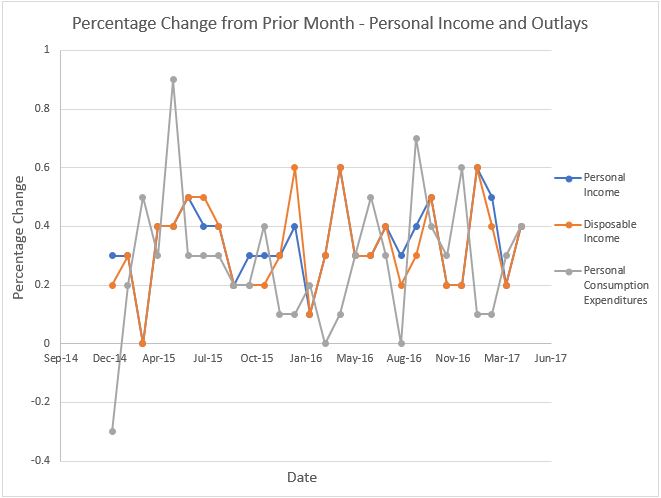 Prices increased a seasonally adjusted 0.2 percent in April according to the Bureau of Labor Statistics – Inflation May 2017 report. The consumer price index (CPI) is up from March, where a 6.2 percent decrease in gasoline prices dramatically influenced the figure. Gasoline prices increased 1.2 percent in April. The volatility of energy and food prices is the main reason economists view the core price index as a more reliable measure of inflation. The core index rose 0.1 percent in April. Over the past twelve months the CPI has increased 2.2 percent, while the core index has increased 1.9 percent. To learn more about inflation we encourage you to visit our free lessons Inflation and Causes of Inflation. 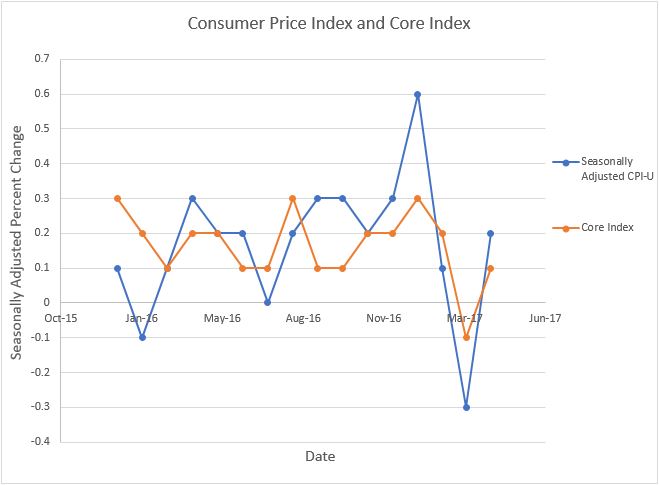 The unemployment rate dipped slightly from 4.4 percent to 4.3 percent in May, which is the lowest it has been since May 2001. Unemployment continues to decline and there is evidence of a tightening labor market which should lead to higher wages (and higher inflationary pressures). 138,000 non-farm workers were added to payrolls. This is down from 211,000 in April and much lower than most economists expected. Workers in health care and mining benefited the most. The average work week remained at 34.4 hours, but the average hourly wage increased $.04 to $26.22. Wage growth continues to be higher than the rate of inflation. During the past year wages have increased 2.5 percent, while the consumer price index has increased 2.2 percent. Most economists believe the low unemployment rate and the shortage of qualified workers will push wages higher. Read the original publication at BLS – Employment Situation. 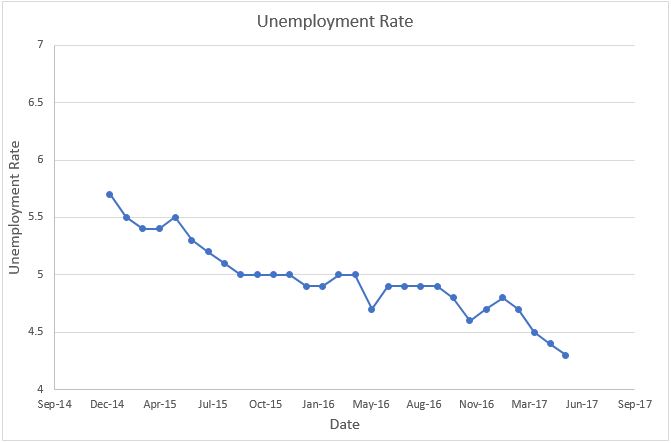