Happy Holidays to the United States economy from the American consumer. The economy continues to thrive with the longest economic expansion ever recorded. Unemployment is at a 50-year low, and people continue to be added to payrolls. Real wages continue to increase, albeit at a slower pace. Stock indexes continue to reach record levels. Prices have increased close to the Federal Reserve’s 2.0% target. The U.S. economy’s performance is truly remarkable given the global economy's anemic growth. Several of the United States’ leading trading partners such as China, Germany and the United Kingdom have experienced sluggish growth or even a recession in their respective economies. We can thank the American consumer, who continues to spend. Businesses have helped too, because they have resisted increasing their prices – even though it has reduced their profits. Until recently, businesses have hesitated before investing to expand. They are worried a weaker global economy, the impact of a trade war, and political uncertainties threaten the current record-breaking expansion. Will the consumer continue to support the economy? My views are in the summary – but first, four key reports published in November and early December have been summarized.

The U.S. economy grew at a rate of 2.1% in the third quarter, according to the revised estimate by the Bureau of Economic Analysis (BEA). Initially the BEA estimated the third quarter advanced 1.9%. Higher business investment was the primary reason for the adjustment. The highlights are summarized below. Readers can access the report at the Gross Domestic Product, Third Quarter 2019, Second Estimate.

Consumers continue to spend despite a drop in real disposable income. Consumer spending or personal consumption expenditures (PCE), accounts for approximately 66% of economic activity in the United States. (Read our lesson Gross Domestic Product – Measuring an Economy’s Performance to learn more about the importance of PCE.) The Commerce Department released its report Personal Income and Outlays, October 2019. The highlights are listed below. 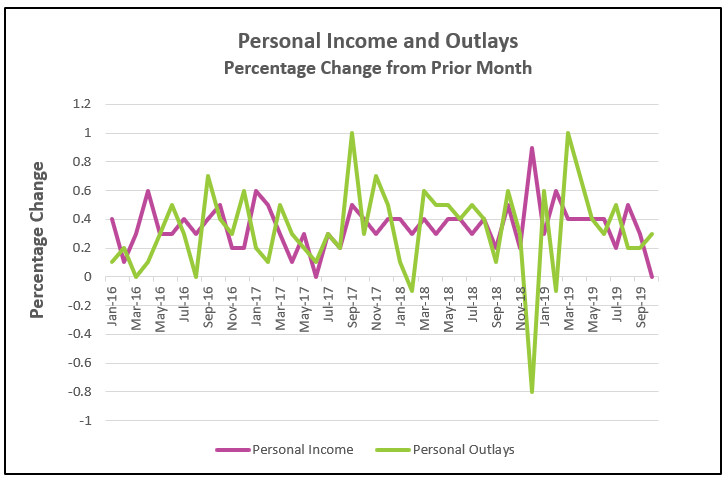 Lower energy prices continue to restrain inflation, according to the Bureau of Labor Statistics’ (BLS) November report. The CPI rose above the Federal Reserve’s 2.0% inflation target for the first time since November 2018. The CPI and core price index are not favored by the Federal Open Market Committee (FOMC), but generally move in tandem with the favored PCE price index. The PCE – Index equaled 1.6%. The difference results from the different weights placed on shelter and health care. We use the CPI because it is the most quoted index. Read the full report by visiting Consumer Price Index – November 2019. Here are the highlights of the BLS’s report. 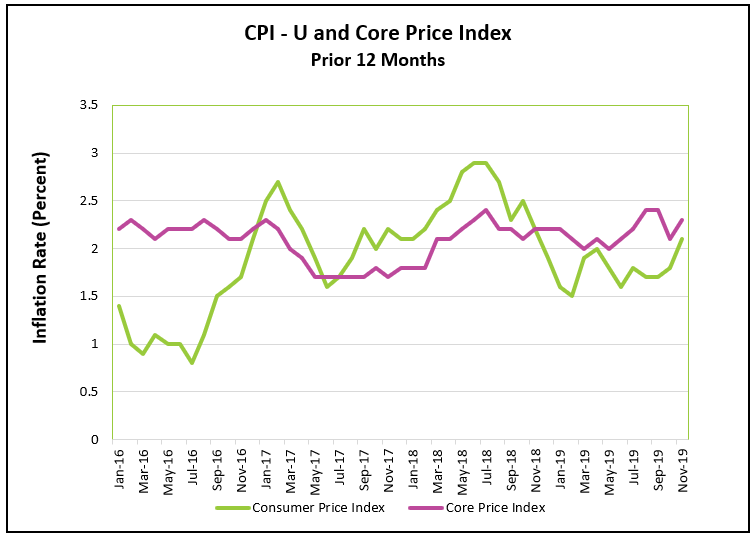 The employment situation remains very impressive. The number of jobs created, and the unemployment rate were better than the consensus. The Bureau of Labor Statistics reported that 266,000 people were added to payrolls in November, the most since January. The Employment Situation – November 2019. The report’s highlights are listed below. 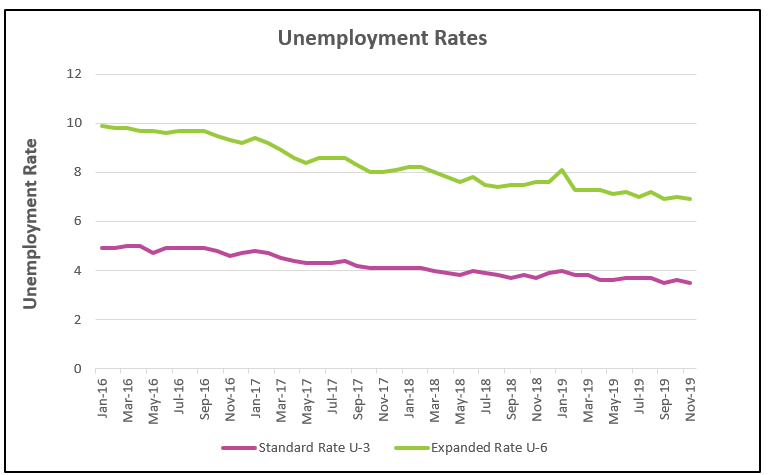 Holiday retail sales are up 3% (CSA, The Business of Retail). Consumer spending is expected to remain strong into 2020. Households spend when they feel good about the economy, and there is much to feel good about. Job security, rising incomes, and a growing economy are some of the variables that affect household attitudes.

By any measure, jobs are secure. The unemployment rate is at a 50-year low, and 226,000 people were added to payrolls in October. That is impressive given that the United States is in the 11th year of an expansion. People are returning to the labor market. Many employers complain that finding qualified workers is getting harder and harder. As expected, wages have increased because of the increase in demand for workers. Wages and salaries rose 0.4% in October. But, personal income fell in October, largely because business owners experienced a decline in earnings.

Profits for larger companies were also lower. This is not surprising since tariffs have increased business costs. Many companies are charged a tariff by the countries importing their goods or services. In addition, their manufacturing costs may have increased if the materials used in production have been imported. For example, a tractor manufacturer will pay a higher price for the steel it uses to build its tractors, assuming the tractor producer imports the steel it uses, and the steel supplier passes a portion of the tariff it must pay the US government to the tractor manufacturer. But then there is an added cost - the tractor producer must pay a tariff to the Chinese government if it wants to sell its tractors in the Chinese market. Furthermore, the quantity demanded would decrease if a manufacturer raises its price to pass some of the added cost through to the consumer. Sales would decrease. Thus far, many companies have chosen to absorb most of the cost, which contributed to the lower profits in the third quarter. Will lower profits deter businesses from hiring? It could, if managers choose to curb hiring, invest in capital and / or lay off workers to reduce their costs. Read our free lesson Supply and Demand - The Costs and Benefits of Restricting Supply to learn about the economic impact of tariffs.

Continued growth in consumer spending depends on consumer sentiment. Have the much publicized troubles in Washington, the weak global economy, the troubles in the agricultural and manufacturing sectors influenced household attitudes? They may have. Signs are mixed. The Consumer Confidence Index and the Consumer Sentiment Index are two indexes that measure how optimistic or pessimistic consumers are about the economy. November’s Consumer Confidence Index has fallen slightly the last four months. However, the University of Michigan’s Consumer Sentiment Index has increaased every month since August. Perhaps this explains the recent deceleration of consumer spending. After adjusting for inflation, consumer spending only increased 0.1% in October, compared to 0.2% in August and September, and 0.3% in July. A deceleration in consumer spending could be an indicator that the economy is reaching its peak.

In the long-run, consumer spending cannot support more than 2.0% growth in RGDP. Ultimately, businesses must earn a profit. Investment in capital is needed to increase productivity. It is encouraging that industrial production is showing signs of recovering. Production increased 1.1% in November. Manufacturing, the largest component of industrial production also increased 1.1% according to the Industrial Production and Capacity Utilization report published by the Federal Reserve yesterday. November’s increase is the largest monthly increase since October 2017 and follows decreases in the last two months and three out of the last four months. Returning workers following the settlement of the UAW strike propelled the output of motor vehicles higher. However, the Federal Reserve concluded that the industrial and manufacturing indexes would have gained 0.5% and 0.3% respectively if motor vehicles were excluded. One month does not make a trend, but hopefully it is a sign of the manufacturing sector improving. November’s production increase was supported by the Supply Management Institute’s (SMI) report published December 2nd. However, the SMI’s purchase managers index (PMI) was less encouraging. It fell 0.2%. The PMI is derived using a survey of the purchasing managers of many companies.

I am bullish about the economy’s future. The Federal Reserve has done a terrific job in monitoring and directing our economy. Improving global economies and new trade deals will stimulate the U.S. economy into another unprecedented year of expansion. Americans are blessed to live in a country with a healthy economy.

May each of you have a Blessed Holiday Season. Merry Christmas and Happy New Year.

Thank you for your support.