The US economy remains healthy: growth is near a record pace, unemployment is very low, and inflation is tame. The rate of economic growth slowed from what most economists consider an unsustainable rate of 4.2% in the second quarter to a more sustainable rate of 3.5%. Prior to the second quarter, growth had not exceeded 3.5% since the third quarter of 2014. Most economists expect the US economy will continue to grow and that next year the economy will set a record for the longest recorded expansion.

The BEA’s September update on Personal Income and Outlays provides a glimpse of trends going into the fourth quarter. A summary of the most important data includes: 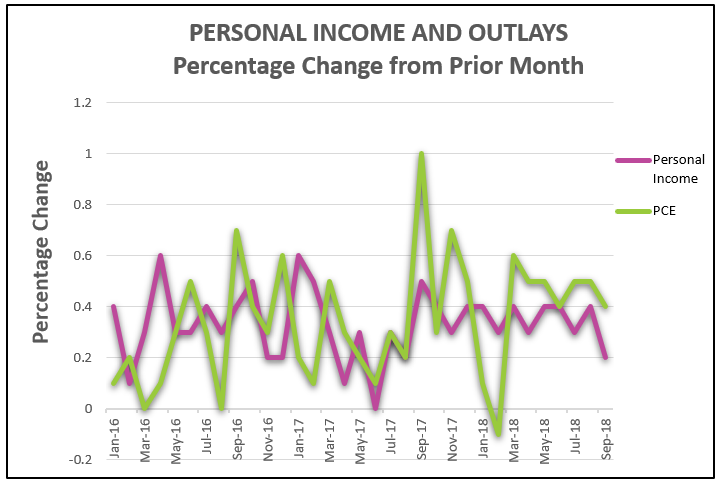 The Bureau of Labor Statistics (BLS) published its Consumer Price Index Summary for October on November 14th. Here are the highlights. 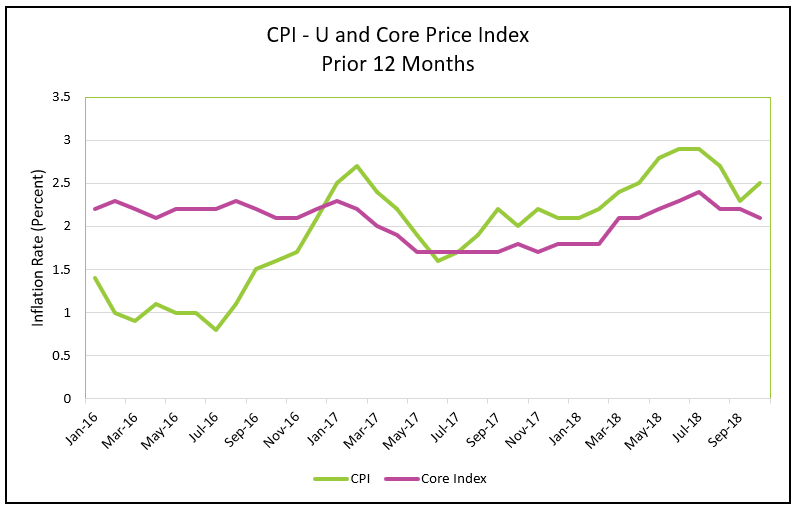 On November 2nd the BLS published The Employment Situation for October. Here are the highlights. 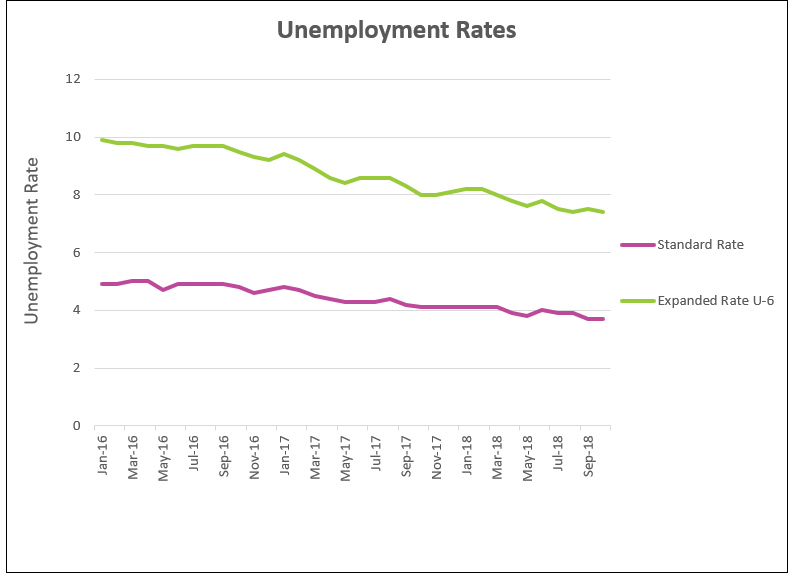 Consumers feel good about the economy. They should. Low unemployment improves job security. In November, the Bureau of Labor Statistics BLS) reported that the number of job openings is greater than the number of unemployed. Not surprisingly, this has pressured employers to increase wages to attract and retain workers. Real disposable income has been increasing, helped by the tax cut earlier in the year. The Consumer Conference Board reported that October’s measure of consumer confidence reached its highest point in 18 years. (Consumer Conference Board) Households spend more when they are optimistic about the economy. Last quarter consumer spending increased 4%. This is important because consumer spending comprises approximately 2/3rds of the US economy.

Government spending (federal, state and local) is also contributing to the economic growth. Federal spending has grown an average of 3.2% each quarter since the beginning of 2018. This compares to an average increase of 0.33% between 2008 and 2016. Fiscal stimuli will continue to bolster the economy’s aggregate demand, which causes demand-pull inflation. (To go into more depth read our free lesson, Fiscal Policy – Managing the Economy By Taxing and Spending.)

Weaker real estate sales and lower exports prevented the real gross domestic product (RGDP) from growing at an even faster clip. Existing home sales has decreased in every quarter of 2018. Fewer single-family homes are being constructed. Higher home prices and rising mortgage rates have made home ownership more difficult for many – even after the increase in disposable income. (Read the attached summary from the National Association of Realtors to learn more.)

Exports fell 3.5% last quarter. President Trump recently imposed tariffs on many goods, including steel and aluminum, in an effort to prevent the loss of American jobs to foreign companies. Many countries have retaliated by charging a tariff on US manufactured goods. A tariff is a tax on an imported good and increases the price of the good in the importing country. Some people and companies have been unwilling to pay the price for the US manufactured good. Last quarter exports increased 9.3%, largely because many countries (most notably China) increased its purchases of US goods (notably soybeans) before the tariff was imposed. This quarter’s slowdown resulted from the higher price, but is also partially explained by less of a need to acquire goods that were purchased in advance last quarter. Next quarter's figures will more accurately reveal the impact of the tariffs imposed by the US and other countries. (Read our lesson, Supply and Demand – The Costs and Benefits of Restricting Supply for an academic discussion on the impact of tariffs.)

The BEA reported that business investment grew at a disappointing 0.8% in the third quarter. Improved productivity is essential to sustain an economy over a long period without inflation. Lower tax rates and faster depreciation were supposed to induce business investment. It did in the first and second quarters when investment increased 11.5 and 8.7%, respectively. Perhaps businesses are hesitant to invest because they believe the expansion is nearing its peak. This is a trend that the Federal Reserve will watch closely when evaluating its monetary policy.

Inflation was lower in the third quarter. The PCE price index, the index favored by the Fed, slowed from an annual rate of 2.0% to 1.6% between the second and third quarters. The Federal Reserve will likely reconsider increasing interest rates if inflation remains below its target of 2.0%.

Have the recent data provided any indication of a future trend? Growth slowed slightly, and most economists believe it will stabilize near 2.5%. Inflation is beginning to show signs of increasing – probably propelled upward by a combination of higher wages, tariffs, and a higher aggregate demand as companies approach their capacity. The most recent Income and Outlays publication reported that the PCE price index remained at 0.1%, which is below the Fed’s target. However, the core price index rose 0.2%, which is slightly above the Fed’s target. The core index is considered more reliable because it does not include volatile food and energy prices. It is important to note that September’s annual increase was not enough to push the rate above the Fed's target of 2.0%. Watch these rates closely because yesterday the Bureau of Labor Statistics announced that October’s consumer price index rose at an annual rate of 0.3%, up sharply from the 0.1% increase in September. This is mainly because gasoline prices rose in October. But, the increase will probably not last because crude oil prices have recently dropped. The core index, as measured by the BLS, equaled 2.0% in October.

October’s employment situation remains very good. Unemployment remained at near record lows and 250,000 workers were added to payrolls. Many people are returning to work. The labor participation rate inched up 0.2% to 62.9% in October.

How will the election impact the economy since the Democrats will control the House of Representatives? What will happen when the federal government’s spending cap is reached next September? Will the government continue financing growth with debt, or will it curtail the debt which could slow growth? During the Obama Administration a Republican Congress threatened to not increase the debt ceiling (which could have resulted in the US defaulting on its debt) and worked hard to curb spending. Growth in federal spending averaged 0.33% during the Obama Administration. Since then, the Trump Administration and Republican Congress have increased spending to record levels. Quarterly increases in federal spending averaged 2.1% since President Trump was inaugurated. This has helped fuel the economic growth we enjoy today, but it has also increased the national debt, which we will have to pay for tomorrow. Will the Democrats flip the table and pressure the Trump Administration to curb spending? If so, it could slow the pace of economic growth.