Friday, July 14, 2017
Tesla, Inc. is a fascinating company. In just 14 years it has emerged as a leader in technological innovation in the automotive industry by building electrical cars that are fun to drive, attractive to look at, with the most advanced self-driving technology. Its mission is to "accelerate the world's transition to sustainable energy." (Tesla.com) Elon Musk, who joined the company in 2004, has led the company to where its market value exceeds GM's and Ford's market values – even though Tesla has not earned a profit. In the first quarter of 2017 Tesla lost $397 million. Why is Tesla valued so high?

First, let's examine the risk of starting a new car company. Entrepreneurs are hesitant to enter an industry which is an oligopoly because of the high barriers to entry. Normally the barriers are economical. The economies of scale are such that many goods or services would need to be produced before a profit can be realized. Years of losses may be required prior to selling enough of a good or service to achieve a profit. The sustained losses deter most potential entrepreneurs from entering the industry.

Huge investments may be required to build plants and purchase the equipment required to manufacture a product. However, this investment may be small in comparison to the money needed to build distribution channels and market the good or service to the public. Imagine entering the automobile industry. Large manufacturing plants must be built. The trust and support of distributors must be earned to sell the new brand of cars. Mechanics need to be trained. Most importantly, it may take years to gain consumer confidence. Consumers who like the car may not purchase it because they fear parts and service may be difficult to secure if the company does not survive. Clearly the barriers to entry are very high in the automotive industry.

Here are four points to consider when evaluating Tesla as an investment or if you are considering purchasing a Tesla car.

Tesla's story is compelling. I am typical of most men. I am enamored with high performing, and sleek cars. I also root for people and companies that take large risks to create a new company or product. Tesla fits into both categories. Tesla's Model S can accelerate from 0 to 60 in 2.5 seconds, which is one of the 10 fastest cars ranked by Driving. It also offers advanced self-driving technology according to RAC. Most intriguing – all Tesla cars are electric! 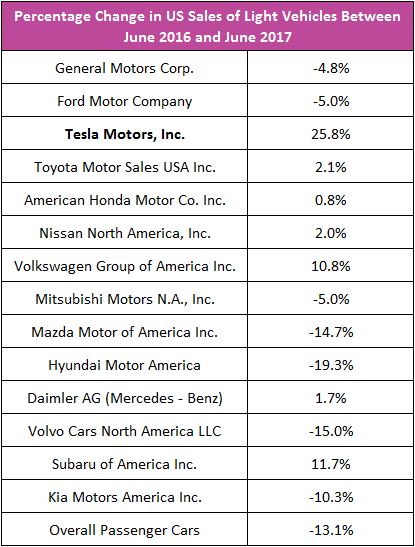 In the past 12 months, Tesla's sales grew 25.8 percent, while most of the other companies experienced declining sales. Tesla's cars have appealed to the affluent. Their cars retail for between $87,000 and $173,000. Tesla hopes to broaden its market when it introduces the Model 3 this month. The Model 3 has much of the same advanced technology of the higher priced cars, but it has a base price of $35,000. Approximately 400,000 people have deposited $1,000 to reserve a car. Elon Musk tweeted that Tesla plans to increase production to 20,000 cars a month by the end of 2017 to accommodate the increase in demand.

Tesla investors have seen the value of their stock increase 45 percent in the past 12 months. There is a lot to be excited about with Tesla!

Tesla's story revolves around Elon Musk. Mr. Musk is an entrepreneur with extraordinary vision. He attacks major problems most of us would not consider, including the extinction of humanity, sustainability, and climate change. He has risked his financial security many times in his quest to solve these problems.

Mr. Musk was born in Pretoria, South Africa on June 28, 1971 during the middle of the apartheid movement. His mother was Canadian and his father was South African. In 1989, at age 17, he moved to Canada to attend Queens University. He left Queens University to attend the University of Pennsylvania, where he earned a Bachelor of Science in Electrical Engineering and Economics from the Wharton School of Business. Following graduation, he enrolled at Stanford University, but dropped out after only two days to start his first company, Zip2 Corporation with his brother.

Zip2 was a city guide for the Internet. It provided on-line maps, directions and business listings. Zip2's primary market was newspapers. Compaq Computer Corporation purchased Zip2 in 1999. Musk rolled his gains into starting X.com, which later became PayPal, and was eventually sold to eBay for $1.5 billion. His share of the sale proceeds was $185 million. Many of us would have been content to just enjoy our new wealth. Not Elon Musk. PayPal provided the experience and money needed to pursue his vision of reducing humanity's vulnerability to extinction by colonizing Mars and building electrical cars.

Climate change, artificial intelligence, more sophisticated weaponry in the hands of more questionable foreign leaders are a few of the man-made threats to humankind. The possibility of an asteroid colliding with the earth is another. Musk's solution - colonize Mars. He started SpaceX with that goal and believes man will visit Mars in two decades. There are only five entities that have sent a rocket into space and safely returned a portion of it: the US, Russian, and Chinese governments, SpaceX, and Blue Origin. SpaceX has contracted with NASA to equip the International Space Station. But - SpaceX is the subject of a future blog.

Tesla was not founded by Elon Musk, but Mr. Musk has provided the leadership and capital to make Tesla what it is today. Elon Musk had the courage to risk his financial security when Tesla needed it most. He is currently Tesla's largest shareholder and owns over 20 percent of the company. (Investopedia)

Elon Musk is very concerned about the environment. Gas driven cars generate a lot of carbon. Electrical cars do not. Tesla is not the first company to enter the electric car market, but in the early 2000s electric cars were not very economical and lacked performance. Tesla is the first company to manufacture a high performing, and visually appealing totally electric car. The environmentally concerned Musk also ventured into solar power when Tesla acquired SolarCity, the second largest producer of solar panels. One goal is to power his "filling" stations with solar power. He also wants to reduce the carbon footprint left by electrical generating plants.

MarketInsider reported on April 4, 2017 that Tesla's market capitalization ($47.77 billion) exceeded Ford's ($44.7 billion). Within a week, The Wall Street Journal reported that Tesla's stock surged high enough to boost the company's value to $51.17 billion, pushing it higher than GM's value of $50.93 billion. Market capitalization (also referred to as the market cap) is the total market value of all the outstanding shares of a company at a given moment. It is calculated by multiplying the number of outstanding shares by the market price per share. For example, if a share of Todd's Sports Equipment sells for $20, and 1 million shares are outstanding, Todd's Sports Equipment market capitalization equals $20 million. A company's market capitalization increases following an appreciation of the share price or when a company issues new shares of stock.

How can a company that has not earned a profit and produces far fewer vehicles be valued so high? When investors purchase a stock, they are buying a share in the future earnings of the company. Therefore, investors must believe that Tesla's future earnings will be large enough to justify the current market value. (See Understand a Stock's Performance Using Supply and Demand.) During the past week investor concerns (see below) have pushed the stock price lower to a point where GM's market capitalization once again exceeds Tesla's. (On July 7, 2017 GM's market cap was $52.2 billion and Tesla's equaled $51.4 billion.)

I do not plan to purchase Tesla stock even though I believe in the company and Elon Musk. I hope Tesla is successful and that someday I will own a Tesla car. But today, the investment is just too risky for me. Here are my concerns.

Elon Musk's plans are ambitious. Cadie Thompson wrote of Tesla's plans in Business Insider. They include increasing manufacturing from 78,000 vehicles to 500,000 vehicles annually by 2018 and 1 million cars a year by 2020. Musk also plans to complete the 5.5 million square feet Tesla Gigafactory to furnish the batteries needed for Tesla's vehicles. He hopes to expand manufacturing into China. (Forbes)

Current operations are not generating enough cash to fund these projects, making it very important that a high stock price be maintained to finance much of Tesla's expansion. Capacity can be increased through the acquisition of another company or building a plant. In each case a high share price is important.

Investors bid up the price of a stock beyond the norm because they expect wonderful results. Sometimes the expectations are set too high, and when management fails to meet the expectations, the stock price falls dramatically. Tesla's stock fell more than 16 percent between July 3rd and July 6th. On July 3rd, The Wall Street Journal reported that Tesla had sold 41,700 vehicles in the first half of 2017. This was at the low end of expectations and clearly disappointed investors. Tesla's share price also took a big hit on Thursday following Volvo's announcement that all new or redesigned vehicles will be electric or hybrid after 2019. Volvo is not alone. GM, Ford, and Nissan are three other companies that have committed to increasing their fleets of electric cars. Expect competition to increase. More stringent emission standards in countries will only increase the incentive for electric cars. For a summary of each automobile company's commitment to electric vehicles visit PlugInCars.

To follow Tesla, I suggest visiting NASDAQ. I know I will. I wish them the best!