The German Economy - Now and Post-Election

On September 24, 2017, Germany elected members of the 19th Bundestag. The Bundestag is the federal assembly elected by Germans, who in turn elect the federal chancellor. To qualify for representation in the Bundestag a party needs at least five percent of the popular vote. The Christian Democrats (CDU) won the most seats, virtually guaranteeing that Angela Merkel will be elected the German Chancellor for a fourth time. Her centrist policies, a growing economy, and stability in a turbulent world were the primary reasons for her party’s victory.

Traditionally the CDU and Christian Social Union (CSU) have formed a partnership. The CDU – CSU partnership did not receive a majority, so it must form an alliance to create a majority with at least one other party to form a government. In the past, the Social Democrat Party (SDC) has accepted that role to form the “grand coalition”, but following its defeat, it will likely choose to become an opposition party and not join Merkel. Most likely a coalition between the CDU – CSU block, the FDP, and Greens will be negotiated. This is known as the “Jamaican” coalition because the colors of the parties match the Jamaican flag. (CDU is black. FDP is yellow. Green is green.)

The FDP party received 10.7% of the vote and returns to the Bundestag after being voted out in 2013. The FDP will gain additional power if it joins Merkel in the coalition government. The Greens retained their presence in the Bundestag but will likely gain influence when it joins the coalition government. The AfD’s political strength was enhanced by the increase in votes it received since the last election. It received 12.6 percent of the votes, more than any party except the well-established CDU and SDC and will secure seats in the Bundestag for the first time. However, Angela Merkel has clearly stated that including them in the new coalition is not an option. The AfD is a far right, nationalist party that grew out of fear of the current open border policies. It is anti-immigrant and views German Muslims as a threat. the party favors closer ties to Russia, and wants to subdue the Holocaust. These ideas are too radical for Merkel. 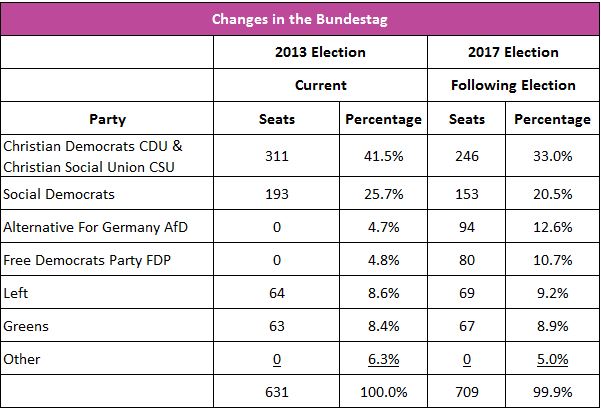 The FDP is pro-business and “laissez-faire”. It favors privatization of business, less regulation, and free markets. A healthy economy can be maintained by lowering the tax rates (€34 billion), a balanced budget, and tough trade agreements. The party did not approve of Merkel’s handling of the Greek financial crisis because its position is that the crisis was not financial; instead it was self-made. German citizens should not be burdened with the cost and risk of bailing out the Greeks.

The Greens are pro-environment. They believe German engineering could lead the world in environmentally friendly technology such as energy efficient cars. In fact, the Greens favor a law requiring auto makers to eliminate the combustible engine by 2030. They favor increasing social spending and support a lenient immigration policy where families of refugees can be united, and immigrants cannot be returned to war zones. They want “a distinct change of course in German policy on Europe. What is needed is partnership on an equal footing, with respect and more solidarity and sustainability rather than unilateral austerity policies.” (European Greens)

Finally, the SDC received the second most votes, but 5.2% less than in 2013. Except for the CDC, the other parties gained at its expense. This is a sign that the SDC is losing favor with many Germans. Its policies to increase social spending and impose more government regulations did not carry much weight partially because the German economy is healthy.

The German economy is the largest economy in Europe and the fourth largest in the world. (World Bank Data) Presently its GDP is growing at 2.1%. (Trading Economics) Unemployment is 3.6% (Trading Economics), and inflation is 1.8% (Trading Economics). Fiscal management is very conservative. Government debt is only 78% of the country’s GDP, much less than most other developed countries such as the US (127.6%), the United Kingdom (126.2%), and France (120.3%). (Visit OEDC.org for a detailed list of economic data.) The German trade surplus is the largest in the world. In 2016 German companies exported $263 billion (OECD) more than the German economy imported. Large trade surpluses mean other nations are spending more on German goods and services than Germans are spending importing goods and services. For example, Americans are spending more on German cars than Germans are spending on American cars, which takes jobs away from Americans, much to the chagrin of President Trump who has threatened using protectionist measures. Ben Bernanke, the former chairman of the US Federal Reserve Bank, summarized it this way.

The fact that Germany is selling so much more than it is buying redirects demand from its neighbors (as well as from other countries around the world), reducing output and employment outside Germany at a time at which monetary policy in many countries is reaching its limits. Brookings, Germany’s Trade Surplus is a Problem, April 3, 2015

The German government uses fiscal restraint and is projected to finish 2017 with a record budget surplus of €18.3 billion in the first half of 2017. Low unemployment and a growing economy were the main sources of increased tax revenue.

The German economy depends on trade. One of its greatest challenges will be to negotiate trade agreements while not alienating other nations because of its trade surplus. Many economists recommend using the budget surplus to lower taxes. Lower taxes increase consumer disposable income, which in turn should increase consumer spending and lower the trade surplus. Other economists recommend investing in Germany’s infrastructure. For example, in download speed Germany currently ranks 43rd in mobile and 24th in fixed broadband according to Speedtest Global Index. (By the way, this is a great web site if you want to see where your country ranks.)

Merkel’s welcoming policy for migrants was a major issue during the recent campaign, and was the primary reason for the gains by the AfD. Over 1 million refugees have migrated to Germany since 2015. Most fled the wars in Syria, Afghanistan, and Iraq. Many Germans are concerned by the strains they will place on the German social programs. The CDU takes a more positive view and believes Germany has a humanitarian responsibility, but they also see the refugees as a solution to Germany’s labor shortage. Refugees will need to be supported and trained before they can contribute to the shortage of labor. Angela Merkel hopes that a successful assimilation of the immigrants into the German economy will win back many AfD voters.

For many years business, labor and government have worked together to build the automotive industry into Germany’s largest industry, employing 800,000 people, or 2.0 % of the workforce. Because of its size, the German economy is impacted by developments in the automobile industry. Recent scandals in the industry will require political and legal attention. In 2015, Volkswagen admitted to fraud. It equipped cars with devices that could detect emissions tests on diesel cars. When tested, the anti-pollution device would kick in. However, when being driven the vehicles emitted nitric oxide 40 times the amount allowed. Why did VW do it? So they could fit a stereo in the car! It gets worse. Initially it was thought that only Volkswagen was guilty, but recently several German manufacturers have been accused of colluding to develop the technology to fool the emissions tests and develop other technologies according to an article recently published in Der Spiegel. The collusion goes far beyond emissions, but that is the subject of another blog. The automotive industry could become a drag on the economy as it becomes inundated with litigation. It is essential it regains the trust of consumers. The traditional partnership between the automotive industry and government will be tested – especially with the Green influence. A shift away from diesel to electric cars is expected.

Assuming the Jamaican coalition comes to fruition, what changes are expected in German economic policy? Not much. The German economy is growing, unemployment is low and inflation is in check, and Angela Merkel will remain the chancellor.