What causes the US government spending to increase?

Graph 1 illustrates the rapid increase in government spending since 1901. (US Government Publishing Office.) 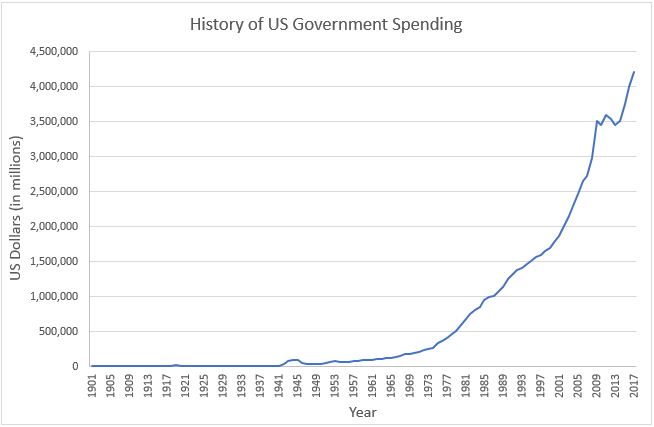 Has Government spending increased faster than the Economy?


What does a spending pattern change say about our priorities?

Has our spending pattern changed? What does a change tell us about today's priorities? One message is loud and clear. We believe we are entitled to much more than our grandparents! As our economy has grown, so too has the population and the demands of the American people. Early in our history families relied very little on the government. Social security did not exist before 1935. President Johnson started Medicare and Medicaid as part of his Great Society in 1965. Entitlements have increased faster than any other component of government spending. Social security has increased at a compounded annual rate of 11.5% since 1950, and Medicare's compounded growth rate has been approximately 11% since 1970. Today, the largest entitlements, Social Security, Medicare, and Medicaid, comprise almost half of the federal budget. In 1950, Social Security was less than 1% of the budget. (Perhaps 1970 is a better comparison of the rise in entitlement spending since Medicare and Medicaid were started in 1965. In 1970, 22% of the budget was for these entitlements.) Part of the reason is that health care costs have increased at a faster clip than inflation and is more in demand than in the past. Total health care expenditures from the private and public sectors has increased from 5% of GDP to 17.4% between 1960 and 2013 according to a study completed for the CMS by Aaron Catlin and Cathy Cowan in 2015. A History of Heath Spending in the United States, 1960 – 2013.


What are the Economic Costs of our Decisions?

As a nation, we must have a mature conversation about entitlements. Unfortunately, it is much easier to look at the small picture than the larger one. America is a very generous country. When someone is hungry we want to feed them. When someone is without health care we want to provide it. I am not advocating against these expenditures, but I do believe it is important for all of us to understand the economic costs and benefits of each of our decisions. It is far more compelling to see the microeconomic impact than it is to consider the long-term consequences. For example, advocates of a minimum wage see those helped and not those who may lose or not secure a job. Taxes deprive the tax payer of the use of the money – money that could be used to purchase items and provide jobs for the manufacturers and retailers of those items. Corporations may choose to delay, or worse, move an investment to another country if the tax rate is too high. Too often we accept government handouts without considering the consequences.

Any government spending must be financed by taxing the public, borrowing money, or selling its assets. The US government's preferred strategy has been borrowing money. Is the cost of providing an entitlement now worth the interest we pay for years to come? Taxes also redistribute income. Did you know that your FICA tax will pay for my retirement?! Thank you!

To learn more about taxing and spending visit our free lesson Fiscal Policy - Managing an Economy by Taxing and Spending.