Last week President Trump suggested that by Easter, (April 12th) he would lift some of the restrictions put in place to slow the spread of COVID-19, or the coronavirus. On Sunday, March 29 he extended the restrictions in the United States until the end of April. In either case, his objective is to identify the correct balance between saving lives and minimizing the economic harm. 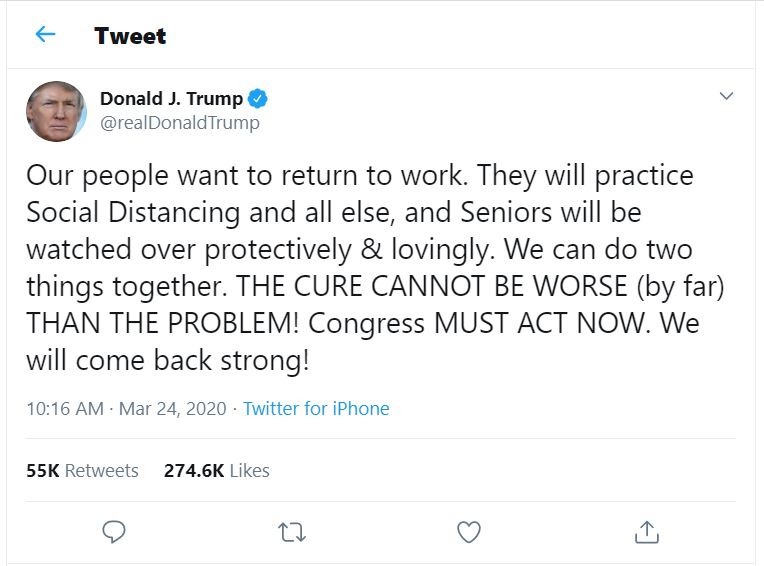 The economic cost of COVID-19 has been staggering and continues to increase. The coronavirus has already severely reduced our income and consumer spending, increased unemployment, triggered record losses in the financial markets, prompted enormous increases in government spending, reduced business spending and resulted in more business closures.

How should policymakers balance the economic cost with the cost of saving lives? To answer this, a value of a life must be assumed. Many would argue that one cannot place a value on a life, but we do. Here are a few examples:

Pollution – We continue to drive our cars and most of us resist paying the higher price for an electric vehicle. We don’t thoroughly clean our water. Instead we accept traces of toxic materials. How much should society pay to clean up our environment to improve our quality of life and prevent deaths from diseases caused by pollutants? The answer depends upon the value we place on a life. The Environmental Protection Agency (EPA) places the value at $9.1 million when completing its cost benefit analysis. (New York Times – As US Agencies Put More Value on Life, Businesses Fret)

Medical Treatment – What should be the maximum insurance companies pay for medical treatment? The UK, which has a public health care system, uses the quality adjusted life year to limit the funding of medications to £20,000 to £30,000 per adjusted year of quality life. (BBC – How much is a year of life worth?)

Everyday risks – We place a value on our lives in choosing the way we live. Jobs with a high risk generally pay more than comparable low risk jobs. Smokers pay to increase the odds of shortening their lives. Others may pay for the adrenaline rush from extreme sports like skydiving. Our driving behavior is influenced by our view of the value of life. Few Americans would choose returning to 1987’s 55 mph highway speed limit. The National Cooperative Highway Research Program concluded that “increasing a speed limit from 55 to 65 mph on an "average" section of  high speed road resulted in about a 3% increase in the total number of crashes and a 24% increase in the likelihood that a vehicle occupant would be fatally injured. This increased crash rate would yield a 28% increase in the number of fatalities following the speed limit increase.” Society is saying the cost of driving slower is not worth reducing the fatalities.

Economists use cost benefit analysis when recommending an economic policy. Society has decided the expense of eliminating pollution, unlimited medical care, and slowing down on our highways is not worth the lives these actions would save. Venturing into the public this past month has made each of us weigh the risks (costs) and benefits. For example, some people have chosen to play golf as an escape and a way to exercise. Many college students ignored the recommendation of health experts and traveled to Florida's beaches over their Spring break.

The New York Times, Shutdown Spotlights Economic Cost of Saving Lives summarizes the current dilemma faced by policymakers. The pandemic’s economic cost will be staggering. The world economy seems to have come to a screeching halt. Predictions of next quarter's contraction in the US gross domestic product (GDP) range between 12% and 30%. Last week a record 3.3 million people filed unemployment claims. This Thursday, the government will most likely report a higher number. Businesses will fail - resulting in permanent job losses. But the cost of lives is also stunning. Dr. Anthony Fauci, the director of the National Institute of Allergies and Infectious Diseases, and other health experts, predicted that 200,000 people could die in the United States, even with the containment measures.

In their study, The Macroeconomics of Epidemics released last week, Drs. Michael Eichenbaum, Rebelo, and Trabandt concluded “that people’s decisions to cut back on consumption and work reduce the severity of the epidemic as measured by total deaths. These same decisions exacerbate the size of the recession caused by the epidemic". They concluded that approximately 1.7 million Americans would die without any precautions or intervention. This figure assumes 50% of the population become infected and a mortality rate of 1%. Doing little, would probably not have prevented a recession. Consumers would have still ventured out less. Supply chains would have been interrupted – especially when the suppliers were in China. Fear would have triggered less social interaction and consumption. The Eichenbaum et. al. study concluded that GDP would have dropped $800 billion or 5.5% if few precautions had been taken. But the study also concluded that containment measures steepened the economic decline.

Public health officials are trying to buy some time and limit the spike in patients, thereby preventing hospitals and health care workers from becoming overwhelmed. Given that there is no treatment or vaccine for COVID-19, the only way to reduce the burden on our health care system is to slow the spread of the virus through social distancing. Many national and state governments have ordered that nonessential businesses and people close and stay-at-home. But, such activity worsens the recession. Fewer goods are produced, and households spend even less money than without government restrictions. The Eichenbaum, et. al. study concluded that these measures would save 500,000 more lives than if no restrictions are imposed because fewer people would contract the virus and hospitals would be better prepared.

Recent numbers indicate the study's economic cost is probably understated, but the relationships and trade-offs are more important. Let’s look at them. Assume that the economy would suffer a $2.7 trillion drop in GDP with the present restrictions. Also assume that GDP would have decreased $800 billion without any preventative measures. Finally, assume that the containment saves 500,000 additional lives. How much of economic activity would be lost per life saved? Based on our assumptions, containment measures would reduce the GDP by $1.9 trillion more ($2.7 – $0.8) than if no restrictions were in place. We can calculate the amount of lost activity saved per life by dividing the difference by the number of lives saved.

Since $3.8 million is less than the value of a life, the benefits of containment measures exceed the cost. As the numerator increases, the conclusion changes. For example, Morgan Stanley predicted a 30% drop in GDP. That would increase the amount of lost activity per life to $11.9 million, assuming the other variables are held constant. President Trump is likely concerned the drop in GDP would be closer to $30 trillion.

President Trump must answer a very grim question, “Are we better off containing the coronavirus and further slowing the economy or lift restrictions, lose additional lives and risk a deeper recession?”. Lifting restrictions prematurely could do more harm than good and there would be a minimal benefit to the economy no matter what people decide. Would you go out to eat or to the movies if restrictions were lifted today while people were still being infected? Most people would probably stay at home and wait for the spread of COVID-19 to slow. If so, then lifting restrictions would have a minimal impact on the current course of the economy. If people choose to go out, then the virus will spread and possibly overwhelm our health care system. In fact, this decision could prolong the recession by increasing fears.

Policymakers are not in an enviable position and we should pray for them daily.