US Corporate Tax Rates - Are They Too High?

Who should we believe? Many leaders, including President Trump, state that US corporations are among the highest taxed companies in the world. Other leaders, including Senator Bernie Sanders, point to many profitable companies that did not pay income tax recently. “27 giant profitable companies paid no tax” in 2015 according to an article in USA Today written in March 2016 by Matt Krantz. His list includes General Motors, American Airlines, Xerox, and many more well-known companies. Mr. Krantz was referring to the US income tax. Many conclude American companies are not taxed enough.

Three tax rates should be studied when answering the question, “Are American corporate tax rates too high?” The statutory tax rate is the rate set by law after calculating taxable income. The effective tax rate is the average tax calculated by dividing taxes paid by profits. Finally the marginal tax rate is the rate paid on the last dollar earned. A hypothetical example will be used to illustrate the relative importance of each of these rates.

The US has One of the Highest Statutory Corporate Tax Rates

The United States has one of the highest statutory corporate tax rates in the world, and the highest among the Organization of Economic Cooperation and Development (OECD) countries. The OECD is an intergovernmental agency consisting of 35 countries. Most are wealthy, highly developed countries with high standards of living. Its mission is to “promote policies that will improve the economic and social well-being of people around the world.” In 2016 the US corporate statuary tax rate was 35 percent, or 38.92 percent when state income taxes are included. The table below lists the OECD countries and their tax rates. 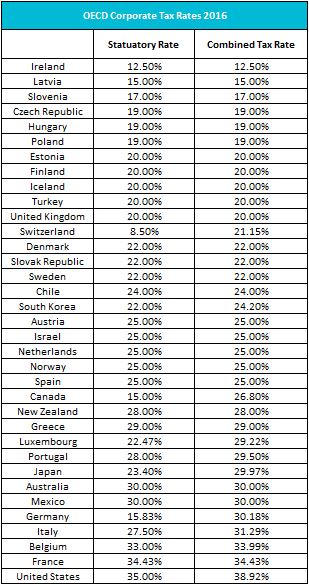 Assume you own two companies with the same profit before tax. One is located in Country A, and the other in Country B. Country A has a statutory tax rate of 15%. Country B’s statutory rate equals 30%. Where would you pay the lowest tax? You probably chose Country A because of its lower tax rate. Now assume that Country B has incentives in the form of tax credits that eliminate your tax liability – effectively reducing your effective tax rate to zero. Country A does not have any incentives so its effective rate would remain 15%. Which country would have the lower tax? Country B because its effective tax rate is 0%. Where would you choose to expand your operations? (Assume the demographics are the same and no country has an advantage.) The wise choice is with Country B because of the lower tax rate. This illustrates how the effective tax rate is more important than the statutory rate.

The high tax rate in the United States has recently drawn much attention because companies are relocating and setting up subsidiaries in countries with a lower effective tax rate to reduce their tax expense. The United States is one of the few countries that taxes foreign earned income. In 2014 Burger King and Tim Hortons, a Canadian donut chain, merged to become Restaurant Brands International. The headquarters was moved to Canada, where there is a lower tax rate. This strategy is called a corporate inversion. Burger King will continue to pay taxes on its operations in the United States, but it will not pay any US tax on operations in Canada or outside the US. Congress recently passed legislation making inversions harder to complete. Since then the number of inversions have diminished – but our leaders and economists are still discussing the competitiveness of the US corporate tax rate. Most agree the rates should be lowered, but how much, and whether or not subsidies and other tax benefits should be changed remains debatable.

There have been several studies that estimate the effective tax rate. The lowest rate I read was 19.4 percent, published by the Citizens for Tax Justice. Other studies concluded the average effective tax rate for US companies was higher. These are summarized in International Comparison of Corporate Tax Rates, prepared for The Alliance of Competitive Taxation in September 2016. The conclusions are summarized on the table below. Where possible I have listed only the figures for the OECD countries. However, some of the studies were broader. It is beyond the scope of this blog to determine why the rates differed. Note that each study concluded the US effective tax rate was higher than other comparable countries.

Is the statutory rate or the effective rate more important in setting tax policy? Economists would argue neither – the marginal tax rate is the most important. The marginal tax rate is the tax rate applied to the next dollar earned. The statutory tax rate is the present tax rate without any tax benefits. The effective tax rate is measured by the past because it is determined by the tax benefits taken in a specific year. The marginal tax rate looks to the future. Isn’t the marginal tax rate the same as the statutory rate for most companies earning millions of dollars in profits? Some would say “Yes”, but I would argue this is not true. Businesses consider the tax ramifications when choosing to proceed with an investment. For example, a business may not proceed knowing the added income will be taxed at 35 percent, but choose to proceed when receiving an investment tax credit. The European Commission and Calgary studies included the marginal tax rate in their studies. They concluded the US marginal tax rates are also higher than other countries. These are included on Table 2. Returning to our example, assume Country B only offered the tax credit for one year and Country A just recently passed a law that will provide a tax credit reducing your effective rate to 10 percent for many years. Which country would you choose to invest in? Probably Country A since you anticipate next year’s income will be taxed at a lower rate. To learn more about marginal analysis visit our free lesson Marginal Analysis – How Decisions Are Made.

US companies must compete internationally. For most, the corporate income tax is a large expense that does not benefit them, so it is rational for companies to take advantage of the tax code to minimize their tax – which may result in companies choosing to conduct business in other countries. Every study concluded that the US statutory, effective, and marginal tax rates were higher than the average. In fact, it was near the highest of the OECD countries. What should be done to minimize the corporate flight? Some may propose passing laws making it more difficult for companies to invert or set up subsidiaries overseas. But this action would not provide an incentive for foreign companies to invest in the US. A combination of lower statutory rates and tax incentives that bring the effective and marginal rates to more competitive levels are needed to provide businesses additional incentives to grow or expand their businesses while attracting foreign companies to expand in the US.