A coordination game is a type of simultaneous game used in game theory when players benefit from coordinating their activities by making the same decisions. There are multiple Nash equilibria.

When two players share a common goal and benefit from coordinating their actions they are playing a coordination game. An example is when two drivers are traveling too fast on a narrow road and must make an immediate decision on which way to swerve to avoid a collision. Their common goal is to avoid a collision. They must decide which way to turn independently and simultaneously. If each driver swerves to their right, then a collision is avoided. Likewise, if both drivers swerve to the left, they avoid a collision. But if they swerve in opposite directions they will collide. The two Nash equilibria are when both swerve right, and when both swerve left.

The “stag hunt” is commonly used in game theory literature to illustrate a coordination game. The hunt was developed by Jean-Jacques Rousseau. In the stag hunt two hunters, Dick and Derrick have the options of hunting a stag or rabbits. Teamwork is required to hunt a stag. Rabbits can be hunted individually. They do not know each other’s decision when they enter the woods. Suppose killing a stag is worth five points to each hunter, and killing a rabbit is valued at two points. Assume that if one hunter chooses to hunt a stag, the other hunter could kill two rabbits and have a satisfaction of four. The resulting payoff table is below. Derrick's payoffs are in purple, and Dick's are in green. 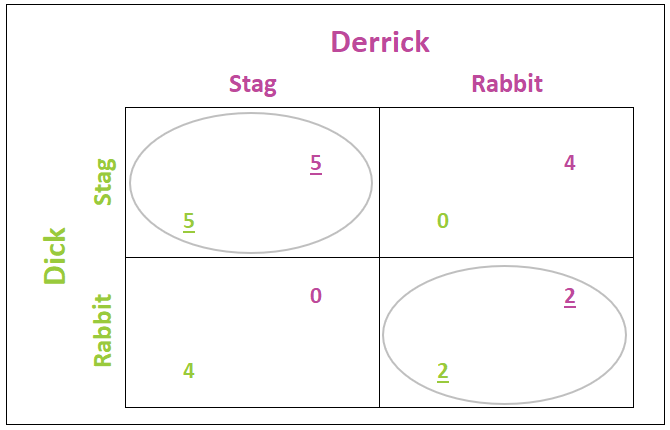 If Derrick believes Dick will hunt stag, then he maximizes his satisfaction by teaming with Dick to hunt stag. This is illustrated on the first row of the payoff matrix. Five is preferable to four, so the five is underlined in purple. However, if Derrick believes Dick will choose to hunt rabbits, he would attain a higher score by also choosing to hunt rabbits because he prefers a score of two to zero. This is seen on the second row of the table. Dick has the same set of decisions. If he believes Derrick will choose to hunt for a stag, he will consider the outcomes in the first column. His level of satisfaction is higher when he also chooses to hunt stag because he prefers a payoff of five to four, which is shown by underlining the five in green. The second column contains the outcomes if Derrick chooses to hunt rabbits. In this case, Dick would also prefer hunting rabbits.

The two Nash equilibria are circled. One where both hunt stag, and the other where both hunt rabbits. A Nash equilibrium results when no player has any incentive to change his strategy for personal gain – assuming each player’s decision remains unchanged after learning the other players’ decisions. It is impossible to determine the most probable decision. That would depend on the personalities of the hunters. If both are risk-takers, the most likely outcome would be the stag, stag option. Economists refer to this decision as “payoff dominant”. Conversely, if both players are risk-averse, then the probable outcome is both choosing to hunt rabbits, which is the “risk dominant” strategy. 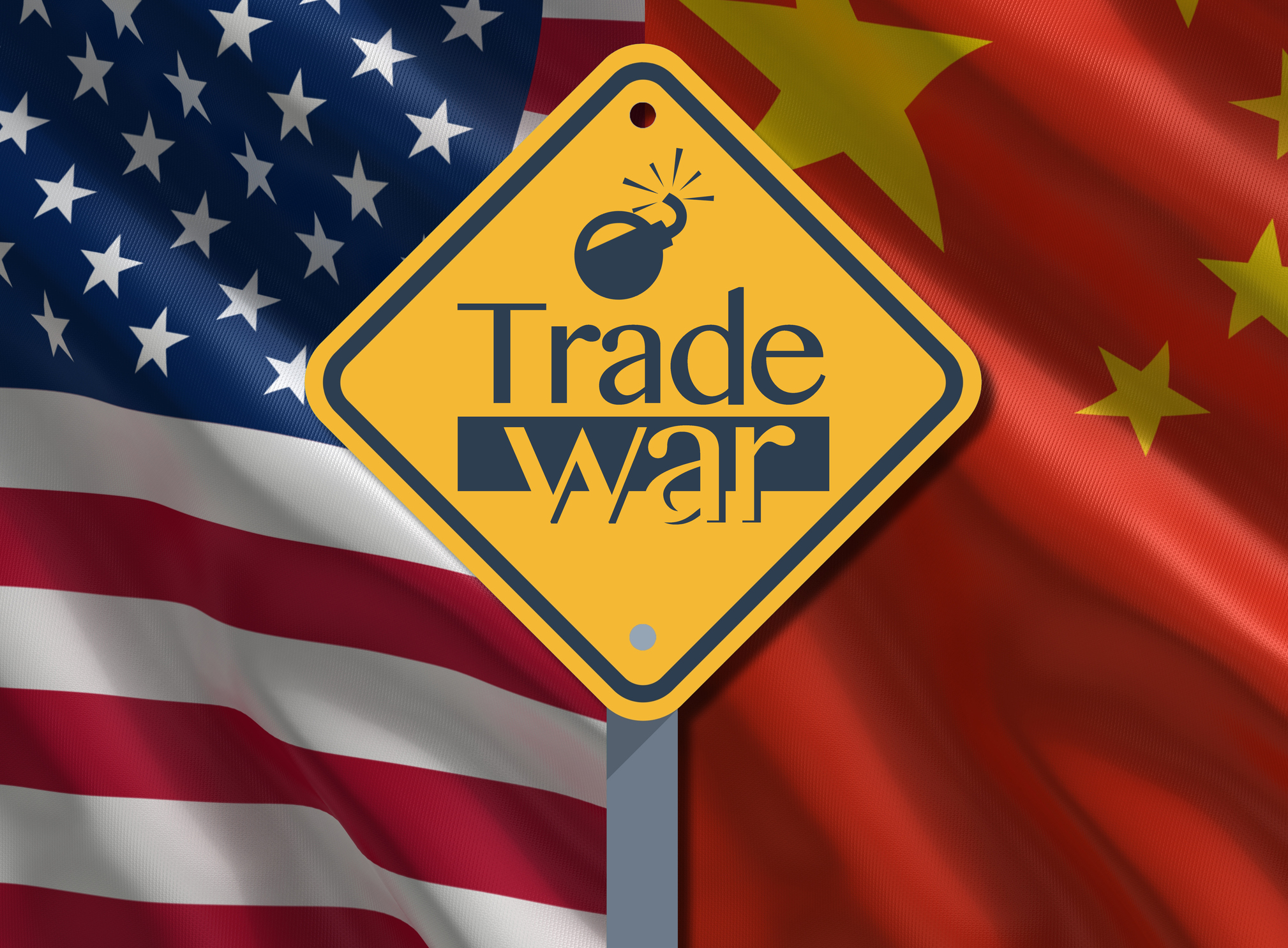 Game theory can be used to show the likelihood of a trade war breaking out without trust and verifiable agreements between two countries. Consider the possible escalation of a trade war between the United States and China. American President Donald Trump and China’s President Xi Jinping imposed tariffs on imported goods in 2019. While politicians often react to what other nations do, let’s consider a scenario where President Trump and President Xi are making the decision to impose tariffs at the same time, without knowledge of what the other world leader will decide to do.

A tariff is a tax on imported goods paid by the exporting companies. For example, if the United States charges a tariff on steel imported from China, the Chinese steel manufacturer pays the tariff to the US government. Most economists believe tariffs harm an economy by restricting trade. The quantity demanded for goods produced in the exporting country is reduced because their price is increased in the importing country. The importing country is harmed because the price of the imported good or service is higher. Prices of domestic goods also increase, especially if they use materials supplied by the foreign manufacturer.

The payoff matrix displays both countries’ potential strategies and the payoffs associated with each outcome. One possibility is an all-out trade war, where both China and the United States impose tariffs on the other country’s goods. In this event, each country suffers a drop in trade, higher prices, and the deterioration of their diplomatic relations with the other country. Assume each country’s payoff, in this case, equals -25 (for a $25 billion drop in GDP). This is shown in the upper left quadrant.

If neither country imposes a tariff, then both countries receive a payoff of 75 (for a $75 billion increase in GDP), as seen in the bottom right quadrant. A high payoff follows because both countries can continue to trade freely, benefiting from their comparative advantages while maintaining positive diplomatic relations with the other country. 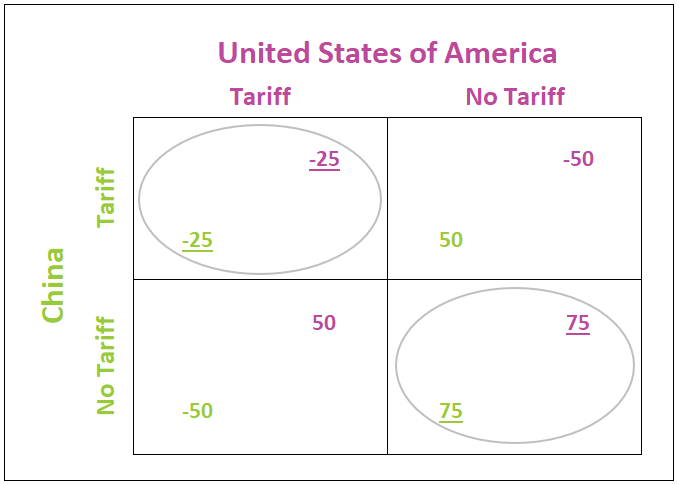 The remaining possibilities are that one country imposes a tariff and the other does not retaliate. For example, if the United States imposes a tariff and China does not retaliate, China’s payoff equals -50 because Chinese goods are now more expensive in the United States. There is a corresponding drop in the quantity demanded for Chinese goods in the United States. The United States payoff equals 50 because US companies sell more to US consumers who substitute the US good for the Chinese good. However, the payoff is less than 75 because consumers pay a higher price for both the US and China-produced goods. In addition, US companies continue to export the same quantity of goods abroad without the tax. This outcome is represented by the bottom left quadrant. The upper right quadrant assumes the reverse would be true if China imposes a tariff and the US chooses not to respond in kind.