December’s prices fell! It was the first decrease since May 2020, primarily because of lower gasoline prices. Inflation remains high when measured over the prior 12 months, but trends in most indexes point to lower rates in the future. The all-inclusive 12-month index decreased every month between June, when the inflation rate peaked at 9.1%, and December, when inflation equaled 6.5%. While not as dramatic, the core index, which excludes gas and food prices, has decreased every month since September. The improvement paves the way for policymakers at the Federal Reserve to slow the pace of rate increases. However, inflation remains well above the Fed’s 2% target. 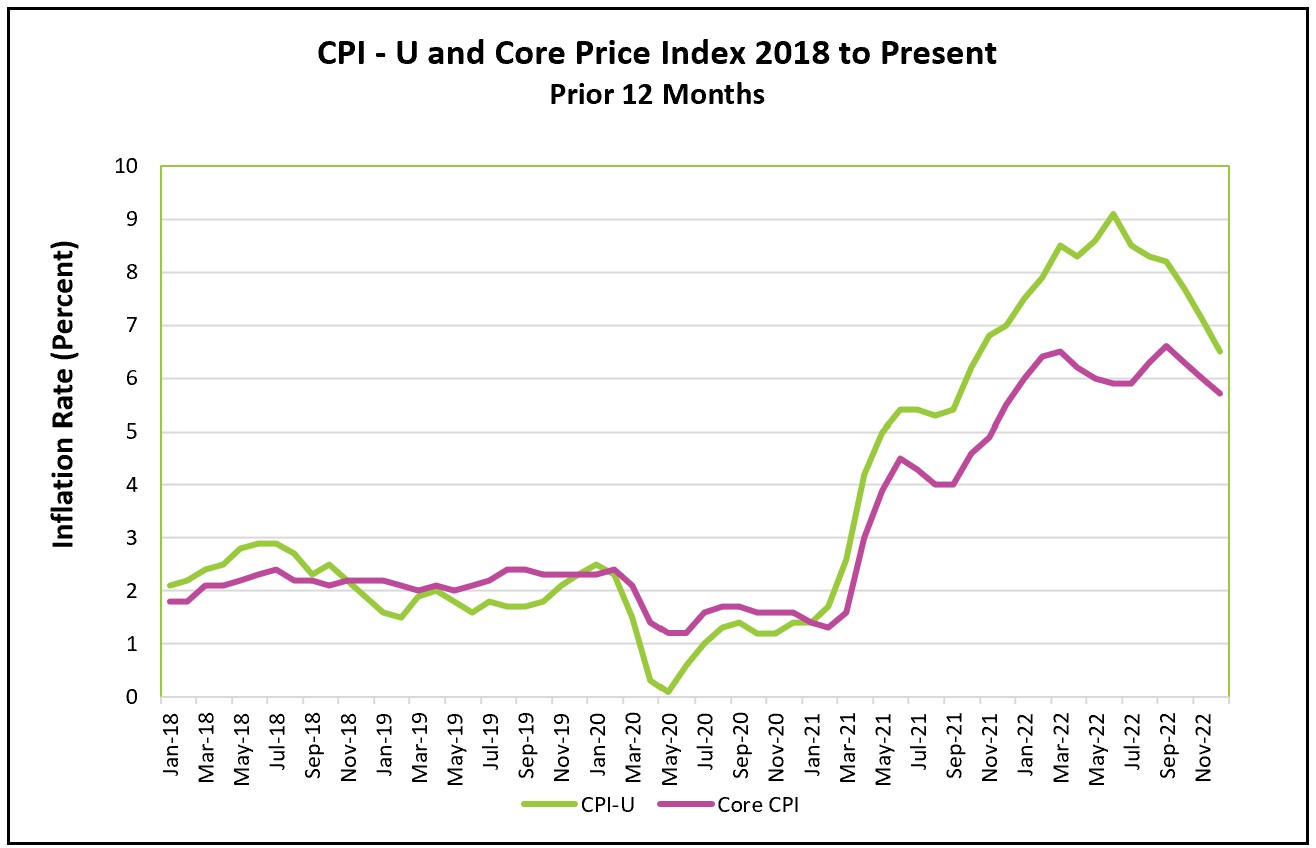 The highlights and analysis of Thursday’s Bureau of Labor Statistics press release are summarized below. You can access the full report at Consumer Price Index – December 2022.

Consumers ended 2022 with a 0.4% increase in real wages. Last week, the Bureau of Labor Statistics reported that wages increased by 0.3%. December’s all-inclusive price index fell 0.1%. Many benefited at the gas pump. The price of a gallon of regular gasoline fell approximately $2.00 between its peak in June and its lowest point in December. Food prices have decelerated to the slowest pace since March 2021. Notably, egg prices rose 11% in December. The demand for eggs has increased because higher meat prices have prompted consumers to eat eggs as a meat substitute. Meanwhile, egg production has plunged as millions of birds have been slaughtered after contracting the avian flu.

The 12-month shelter index, which includes rent, reached a 20-year high in December (BLS). The jump in the shelter index contributed more than half of the increase in the core index. Most economists view the shelter index as a lagging indicator because it measures the average rent of all tenants. They believe new leases provide a better gauge of today’s inflation. The BLS and the Federal Reserve Bank of Cleveland recently developed such an index. The new index has fallen significantly since it peaked in June. One reason policymakers at the Federal Reserve prefer the personal consumption expenditures price index to the CPI is that it puts less weight on housing. (The shelter index contributes approximately one-third to the CPI.)

Durable goods prices fell by 0.8% in December. The demand for durable goods fell as consumers shifted their spending patterns to services such as entertainment and away from goods. Meanwhile, many of the supply constraints caused by the pandemic and the war in Ukraine have improved, enabling manufacturers to lower their prices. Economists believe these trends will continue to pressure suppliers to contain price increases in 2023.

Slowing inflation in the service sector is essential in bringing inflation back to the Fed’s 2% target. That requires slowing wage growth. Wages are the largest expense of most service companies. Policymakers at the Federal Reserve are closely monitoring the labor market for clues on the future direction of wages. A resilient labor market and higher wages would stall any decrease in the economy’s aggregate demand and impede progress in lessening inflation. Last week the BLS reported that the labor market is healthy.  During December, the unemployment rate dipped to 3.5%, companies added 223,000 people to their payrolls, and wages increased by 0.3%. Nevertheless, there are signs that the labor market is cooling. Fewer people have been added to payrolls every month since July. Wages have also decreased and registered the smallest gain in 16 months. (Read US Employment Report - December 2022.)

December’s inflation and employment reports do little to suggest that inflation will return to 2% anytime soon, so analysts expect policymakers to continue increasing its benchmark rate to maintain the downward trend in prices. However, the rate increases will be smaller and probably less frequent. In February, policymakers will likely increase their benchmark rate by 0.25%, down from their 0.50% increase in December. They aim to engineer a “soft landing” by reducing aggregate demand to lessen inflation without causing a recession.

Soon the debate will switch to whether the Federal Reserve is tightening too much. The full impact of a rate increase usually takes a year to filter throughout the economy. Price stabilization takes time in most industries where a sequence of events is needed. For example, it may take several quarters for business investment to fall, which would slow employment and diminish wage increases. So much of today’s tightening will be reflected in 2023’s third and fourth quarters. Tightening too much too soon could throw the economy into a recession.

Are we in or approaching a recession? Later this month, the Bureau of Economic Analysis will release two reports. The Gross Domestic Product, Fourth Quarter 2022 (Advance Estimate), to be released on January 26th, will address whether the economy has entered a recession. The second, Personal Income and Outlays – December 2022, will be released on January 27th and will provide income and consumer spending data. Check back with HigherRockEducation.org shortly after their release for our summary and analysis.