Inflation subsides – Providing hope that it has peaked.

Price increases moderated in October, providing the American consumer with long-awaited good news and encouraging news to policymakers at the Federal Reserve. Prices rose 0.4% in October, matching September’s increase, but fell from 8.2% to 7.7% when measured over the prior 12 months. The changes in the core price, which excludes food and energy, were even more encouraging. October’s core inflation rate fell from 0.6% in September to 0.3%, and the 12-month rate from 6.6% to 6.3%. Investors gleefully responded by sending the Dow Jones Industrial Average up nearly 1,200 points in early trading. However, inflation remains above the Fed’s 2% target, and future shelter prices will probably prevent prices from reaching 2% for many months. 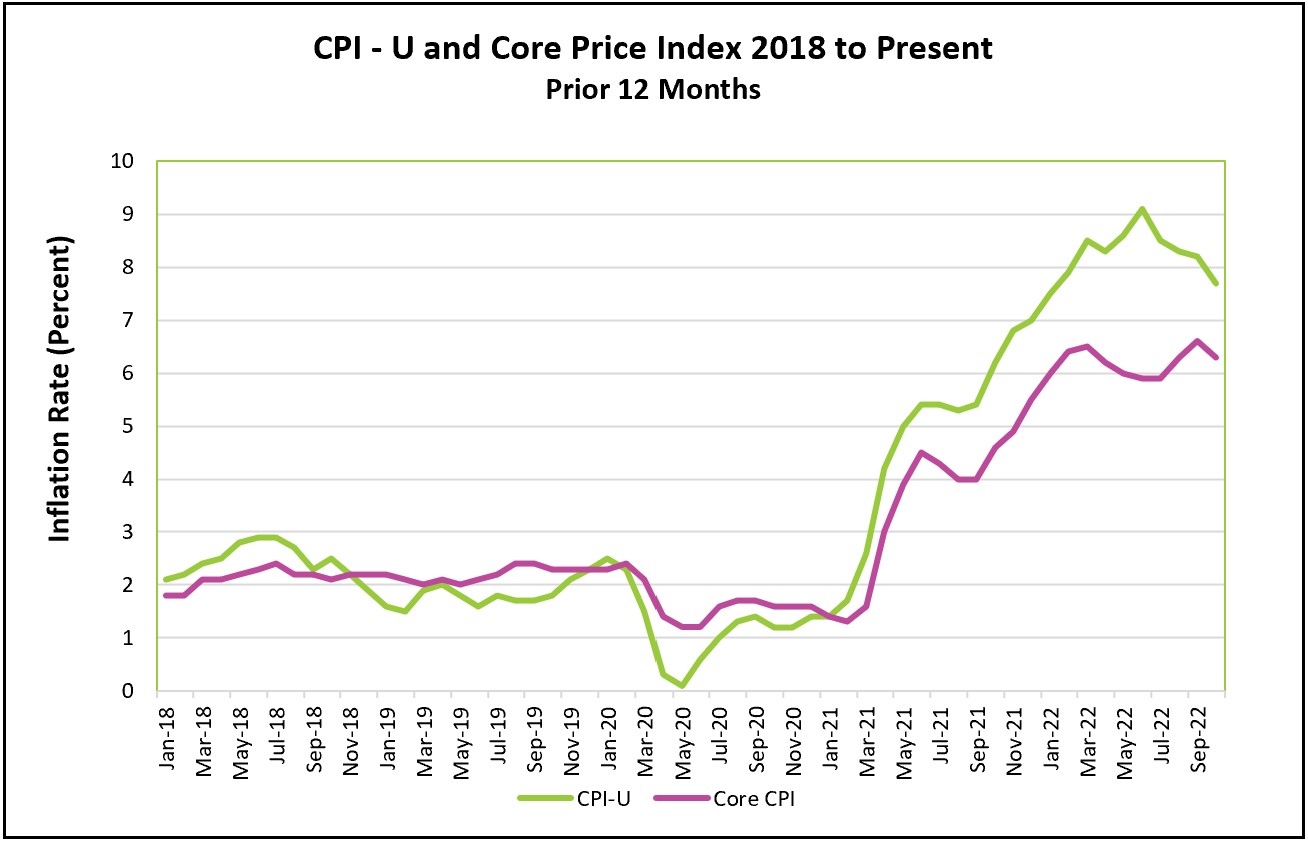 The highlights and analysis of Thursday’s Bureau of Labor Statistics press release are summarized below. You can access the full report at Consumer Price Index - October 2022.

Lower inflation rates are welcome news, but many American families still suffer from inflation-induced hardship. They are losing buying power. During the prior 12 months, real wages have increased 2.8% less than inflation. The cost of necessities, such as shelter, food, and energy, continued to outpace the monthly inflation rate in October. Many families had to dip into their savings and credit to pay their bills. Lower prices in medical services, apparel, and used cars pulled down the average. The aggregate of everything other than shelter, food, and energy fell by 0.1%. (See Table 3.)

The combination of an aggressive monetary policy and the demise of COVID have helped slow inflation. Inflation became entrenched in the economy by events initiated by the pandemic. Containment measures temporarily closed many businesses, resulting in temporary layoffs. The Federal government responded with $4 trillion in assistance, including $931 billion in direct payments to individuals. Incomes increased, and Americans chose to purchase goods because they could not get out. However, supply chain disruptions challenged companies, and frequently they needed more time to supply the goods. The increase in demand and supply shortage pushed up the price of goods. Now supply disruptions are less severe, and businesses are beginning to increase production. People are returning to work. Each of these has reduced inflationary pressures.

In addition, Americans resumed purchasing services. However, service companies such as bars and restaurants were ill-equipped to meet the pent-up demand. Managers needed to hire workers faster, so they bid up wages. Most have increased their prices to recover some of their added labor expenses. The labor shortage remains, and a continued labor shortage would prolong high inflation levels.

Rental rates are not likely to stabilize soon. FreddieMac estimated a 3.8 million unit housing shortage in 2020. Recent mortgage rate increases have slowed housing sales, which has increased the demand for rental units. The National Association of Realtors reported that existing home sales have dropped 1.5% in September. The shelter index, which contributed over half of the CPI’s monthly increase, rose 0.8%, the largest increase since August 1990. The index includes rents, which gained 0.7% in October. Rental rates are likely to rise until the shortage of units decreases, which means that given the weight the BLS gives to shelter costs, the CPI will likely remain high for a long time.

Monetary policymakers at the Fed have increased their benchmark rates five times since the beginning of the year to lessen inflation by reducing the demand for goods and services. The recent deceleration of inflation indicates their strategy is working – particularly with interest-sensitive goods such as houses and goods tied to the housing market. In October, furniture and appliance prices fell by 1.2% and 0.5%, respectively. Is the deceleration sufficient to convince policymakers at the Fed to be less aggressive in their rate increases? Investors hope so, and that rather than a 0.75% increase, the Fed will increase their benchmark rate by 0.5% at their December meeting.

While October’s inflation report is encouraging, there is a long way to go before inflation reaches 2%, the Fed’s target rate. (The Fed prefers to use the price consumption expenditures price index (PCE price index), which is usually slightly less than the CPI. In September, the PCE price index equaled 6.2%.) Untamed inflation causes a recession. When inflation limits buying power, consumers eventually cut back, increasing inventories, reducing production, and bringing down prices. Policymakers will likely continue increasing their benchmark rate until the labor shortage is reduced. (Read our blog discussing the US employment situation.) Economists expect inflation to subside – but many doubt it can be done without a recession and a significant increase in the unemployment rate. Are we in a recession? The BEA’s Personal Income and Outlays – October 2022 report will help answer this question by providing detailed data about income and consumer spending. Check back with HigherRockEducation.org shortly after its release on December 1st for our summary and analysis.