Friday, October 07, 2016
The United States is deep into the 2016 political season. We are bombarded with promises about tax cuts and spending increases. Who should we believe? Which proposals are the best for the economy? The solution is very complex, and there are very bright economists that differ on the best solution. Some argue that increasing government spending advances economic growth by redistributing income to people who are more likely to spend it. Others argue that spending actually hinders economic growth by drawing money out of the private sector, where it can be invested more efficiently. Both sides have compelling arguments which can confuse the voters.

My concern is that too many people ignore the issue and vote for the politician offering today's most appealing solution, at the expense of the nation's best long-term interest. This is particularly true considering that the benefits of spending are felt immediately, but the costs, a higher debt load (which probably means higher taxes) and harm to long-term growth are paid later. I do not want to get political, nor do I want to get too wrapped up in the economic theory. My objective is to present some facts, some simple explanations along with simple questions that all of us should consider when choosing a candidate.

Fact – Our national debt is increasing every second and is presently over $19.5 trillion.

Fact – The debt has grown exponentially for the past 15 years.

We are no longer at the point where spending cuts or tax increases alone can eliminate the debt. The only solution must include economic growth that increases tax revenues faster than government expenditures. Families that incur too much debt frequently rely on increases in income to get out of debt. Watch our video to understand the comparison between families and fiscal policy. 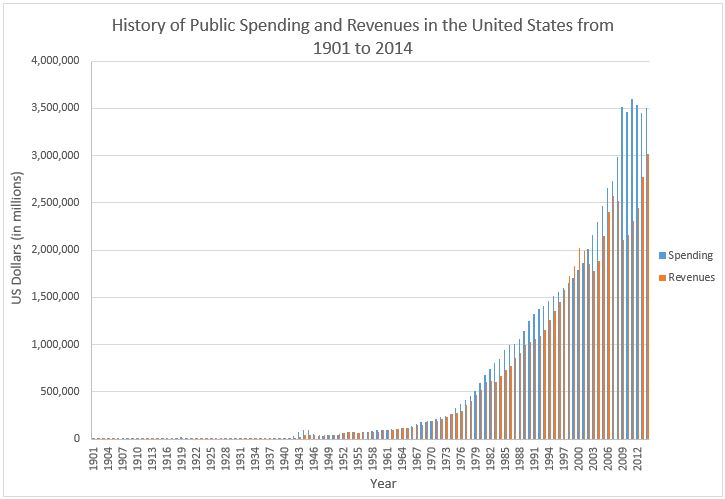 When you hear of additional spending ask, "Does this spending promote economic growth?"

Investment promotes economic growth. Businesses look closely at their return on investment before choosing what to invest in. Governments should do the same when prioritizing if they are serious about reducing the national debt.

Ultimately, an economy's long-term growth is constrained by its resources or factors of production, which include: its work-force, entrepreneurial talent, technology, and natural resources. (For more on the factors of production visit our lesson at: Factors of Production The Required Inputs of Every Business.) Furthermore, government spending can harm private investment. First, less money is available for companies to invest when taxes are paid. Second, interest rates are pushed higher when the government chooses to finance its spending by borrowing money. Competition for money raises rates and deters business expansion. Economists refer to this as the "crowding out" effect. Finally inflation becomes a concern when governments choose to print money to pay for their needs. (Read Inflation.)

Government has an obligation to look out for our well-being. Much of government spending is included in this category. I do not know any economists who would argue against government spending for our judiciary system, or a strong military. What about investments in social security, Medicare, and other transfer payments? These investments increase the aggregate demand, and thereby generate economic growth. But unfortunately, the growth is short-term when compared to investments in our capital structure. I am not recommending cutting all of these items, but we need to be aware that increases in this type of spending have a long-run cost that exceeds investments in capital.

When you hear of a decrease in taxes, ask "Does this decrease cause economic growth?"

A tax cut needs to be regarded as an investment. The government is cutting taxes expecting that the resulting economic growth will generate more tax revenue than it loses with the tax cut. Reducing taxes stimulates the economy by increasing aggregate demand and the aggregate supply. At least that is what the politicians tell you.

When consumers are taxed less, they have more disposable income and spend it on goods and services. This increases an economy's aggregate demand and stimulates economic growth. Assume you receive a $1,000 tax cut. How much of the $1,000 would you spend? Do you believe your $1,000 tax cut will generate enough added income and employment that the government will ultimately receive more than $1,000 in added tax revenue? If not, then maybe the tax cut does not have an acceptable return on investment.

Supply-side economists contend tax cuts increase the economy's aggregate supply. High tax rates dissuade some people from working in favor of more leisure. Workers net more after taxes when the tax rate is lowered, so they will be willing to work more hours. Furthermore, entrepreneurs and businesses will have a greater incentive to develop new technologies when taxed at lower rates. These new developments increase an economy's potential production and pay-off for many years.

So when you are deciding whom to vote for; consider the costs and benefits. If a spending program is touted to promote growth, ask, "Is this an investment I would make?" When a tax cut is proposed ask, "Would I really spend the tax savings?" "Would a business be inclined to invest more after receiving the tax cut?" Government spending does increase the aggregate demand. Tax cuts also increase the aggregate demand; but all spending cuts and tax reductions do not have the same benefit. Increased spending and tax cuts can increase our national debt unless the economic growth generates enough tax revenues to offset the increase in spending or tax deduction. If they don't, it means more debt and ultimately higher taxes. Don't let the politicians tell you otherwise!