2019 was a remarkable year for the US economy. 2.1 million people entered the workforce, which reduced the unemployment rate to the lowest it has been in half a century (3.5%). Many long-term unemployed entered the labor market. Tighter labor conditions prompted companies to increase real wages, but not as much as most economists expected. The stock market reached new highs. Americans felt encouraged. They spent – even with global weakness and a suffering manufacturing sector. Yet inflation remained contained at 2.3%. (Many economists are worried that inflation is too low.) All of 2019's  figures are not in, but it is likely that the real gross domestic product grew more than 2%. This is astonishing, given the economy is in the longest recorded expansion in our nation's history. How much longer will the expansion continue? Will households continue to support the economy? Read my analysis and 2020 predictions at the end of the blog - but first, four key reports published in November and early December have been summarized.

The Bureau of Economic Analysis (BEA) published its third estimate of economic growth for the third quarter of 2019. There were very few revisions. Readers can access the report at the Gross Domestic Product, Third Quarter 2019, Third Estimate. The Advance Estimate for the fourth quarter will be published on January 30th.

Income increased sharply in November. This enabled consumers to continue fueling the record expansion with a healthy increase in consumer spending. Consumer spending or personal consumption expenditures (PCE), accounts for approximately 66% of economic activity in the United States. (Read our lesson Gross Domestic Product – Measuring an Economy’s Performance to learn more about the importance of PCE.) The Commerce Department released its report Personal Income and Outlays, November 2019. The highlights are listed below: 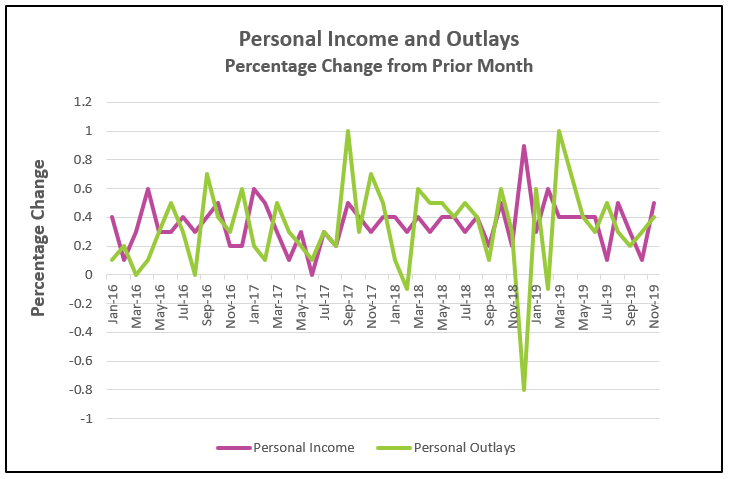 Prices, as measured by the CPI, rose 2.3% in 2019, the largest increase since 2011. Prices increased 1.9% in 2018. The core inflation rate also rose 2.3% in 2019. The CPI and core price index are not favored by the Federal Open Market Committee (FOMC), but generally move in tandem with the favored PCE price index. We use the CPI because it is the most quoted index. Read the full report by visiting Consumer Price Index – December 2019. Here are the highlights of the BLS’s report: 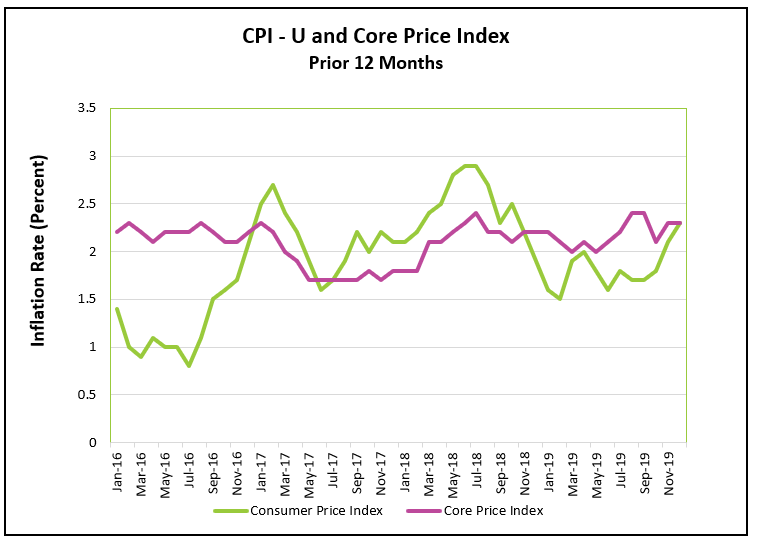 The employment situation remains encouraging. 2.1 million jobs were added to the economy last year. The unemployment rate remains at a historic low level and workers continue to join the workforce. However, fewer people were added to payrolls in December than November according to the Bureau of Labor's report, The Employment Situation - December 2019. The report’s highlights are listed below: 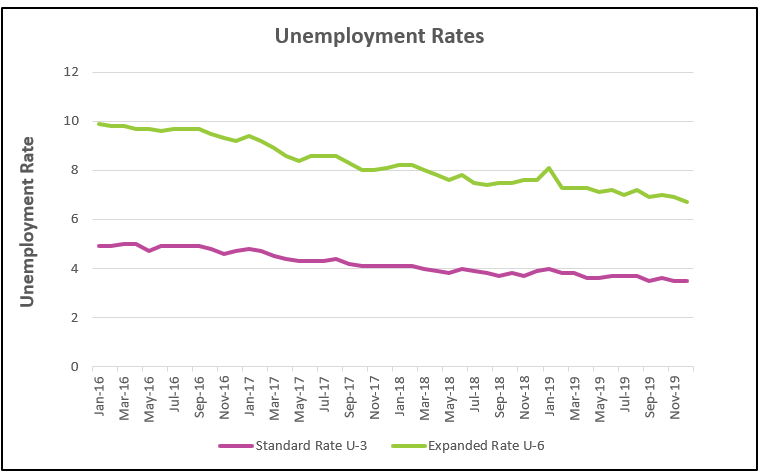 It is hard for me to predict that the US economy will grow faster in 2020 than 2019 when it is in its 11th year of expansion – but I am. However, my predictions assume that trade agreements are approved, global economies improve, and greater certainty prompts businesses to invest. However, I am reminded that the best way to attack an economist is to “kick them in their assumptions.” If trade disruptions continue and political uncertainty grows, I believe the US economy will enter a mild recession.

Continued growth will rely greatly on continued increases in consumer spending. In the long-run, an increase in household spending must be supported by an increase in income. Tariffs have hurt the manufacturing sector and the US economy. In December the Institute of Supply Management issued a gloomy report, when it concluded the manufacturing sector was contracting. Manufacturing must recover to achieve a higher projected growth. The US economy has been partially insulated from the troubles in manufacturing because it is a service economy. But, many service jobs are tied to manufacturing and would be impacted in the long-run if manufacturing continues to struggle. Wages only increased 2.9% in 2019, substantially below the 3.3% increase in 2018. One explanation for the small increase in wages is that most of the jobs created in 2019 were in the lower paid service sector while higher paid manufacturing jobs were cut. Mark Zandi, chief economist at Moody’s Analytics, estimated that 300,000 fewer jobs were created because of the tariffs. Many were in manufacturing. (Yahoo Finance, Trump’s Trade War Has Killed 300,000 Jobs) Reducing or eliminating tariffs will increase the demand for US goods and lift manufacturing, resulting in more hiring in higher paid manufacturing jobs.

Uncertainty over the direction of the trade war and economy have increased business apprehension in investing in capital. Fortunately, low interest rates, a healthy equities market, and a growing economy facilitate capital investment. New trade deals should reduce the uncertainty and prompt businesses to invest more, which will increase RGDP, while improving productivity.

Inflation will be moderate in 2020. A growing economy will generate demand-pull inflation. Central banks will initially encourage an increase in the price level. Higher wages will increase costs. However, I believe any gain would be modest because lower tariffs would lower inflation. (Supply and Demand - The Costs and Benefits of Restricting Supply explains how tariffs increase prices.) In addition, business investment will improve productivity.

The Federal Reserve cut rates three times last year bringing its target federal funds rate down to between 1.5 and 1.75%. The Fed decided to not change the target rate at their December meeting. However, I expect the Fed to begin raising rates slowly as inflation creeps back into the economy. The 10-year Treasury bond yield is 1.85% (Marketwatch 1/17/2020), indicating that investors believe interest rates and inflation will remain low for the decade.

Many economists have expressed concern that low rates render monetary policy less effective. Central banks in most of the major economies have reduced rates to near zero, or even below zero. (Read our blog, Negative Interest Rates – A Frightening Monetary Tool.) Governments will need to rely more on fiscal policy to manage their economies. Fiscal policy will likely continue to be expansionary since 2020 is an election year. In 2019, federal government spending was the fastest growing part of the economy. The US federal government spent $4.45 trillion up 8.5% from 2018. Its fiscal 2020 budget is higher, so the federal government will continue to contribute to a growing economy – even though the government’s deficits will blossom to record levels.

No doubt – 2020 will be an interesting year. How will the election impact the economy? Will global events affect the US economy positively or negatively? Hang on and stay tuned…Isn’t economics fascinating?