It was not a surprise when the Commerce Department reported that the U.S. economy contracted 9.5% in the second quarter. Containment measures and approximately $3 trillion in aide prevented a steeper recession, but more is needed – just when most of the programs put in place have expired. Federal Reserve Chairman Jerome Powell stated at a recent news conference, “it looks like the data are pointing to a slowing in the pace of the recovery”. A recent spike in coronavirus cases has discouraged consumers while delaying the opening of many businesses. Fewer workers were rehired in July than in June. What should be done? Several actions including President Donald Trump’s recent executive orders are discussed in the Summary and Analysis section at the end of this post.

To understand where the economy is and where it is headed, July’s economic numbers need to be reviewed.

The second quarter of 2020 began with states taking drastic containment measures to slow the spread of COVID-19, including closing many businesses and encouraging people to remain at home. The quarter ended with policy makers debating how to restart the economy while limiting COVID’s harm. Meanwhile, COVID-19 cases and deaths attributed to the virus grew. Many people became more apprehensive about their health, their jobs, and the future. Only an increase in federal government spending and a smaller reduction in net exports contributed to a higher real gross domestic product (RGDP). All other components were weaker than the prior quarter: including personal consumption expenditures (PCE), and business investment. The economy shrunk $1.8 trillion. Personal income rose, but largely because of transfer payments made by the federal government. PCE, which comprises approximately 66% of the economy, fell sharply. Readers can access the report at the Gross Domestic Product, Second Quarter 2020, Advance Estimate.

Consumer spending increased in June because businesses continued to re-open and consumers ventured into the marketplace more frequently and many households spent the stimulus payments they received from the federal government. Personal income fell for the second straight month in June because the reduction in government transfer payments ($484 billion) was greater than the increase in compensation to employees ($245 billion) and proprietors’ income ($80 billion). Consumer spending remains approximately $1 trillion below pre-pandemic levels. Prices as measured by the PCE price index increased but remain below the Federal Reserve’s 2.0% target. Read the full report by following the link Personal Income and Outlays, June 2020. The highlights are listed below. 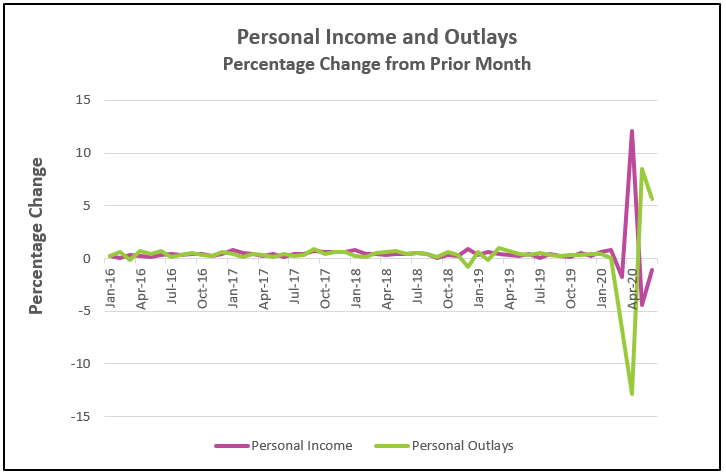 Increases in the demand for goods and services that had been reduced by the containment measures propelled prices higher. The core index increased more than any month since January 1991. Economists prefer the core price index because it is more representative of price trends since it excludes volatile food and energy prices. The largest increases in the core index were apparel (1.1%), used cars (2.3%), vehicle insurance (9.3%) and airfare (5.4%). Read the full report by visiting Consumer Price Index – July 2020. Here are the highlights of the report. 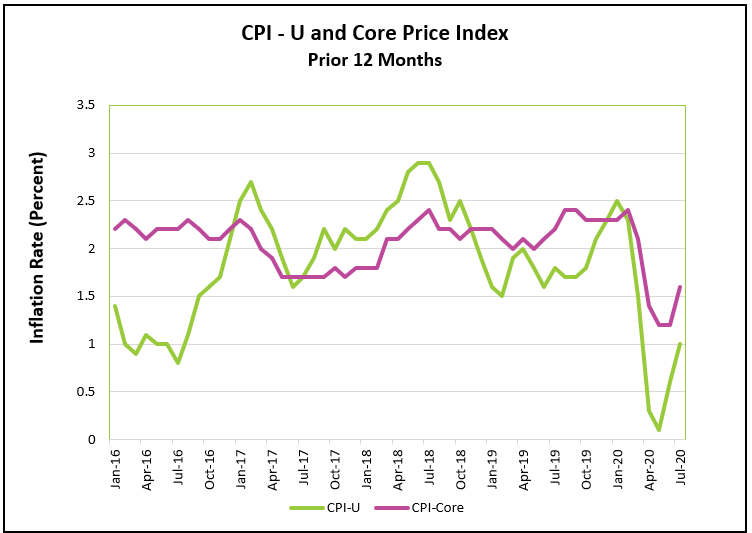 The unemployment rate has fallen for three consecutive months as communities continue to reopen following the imposition of containment measures in March to combat COVID-19. But people returned to work at a slower pace in July than in June. Employers appear reluctant to hire when COVID continues to spread and states and cities reconsider reopening. The stubbornly high number of permanent job losses is indicative of businesses shutting down as the likelihood of a quick recovery seems less certain. The highlights from The Employment Situation – July 2020 are listed below. 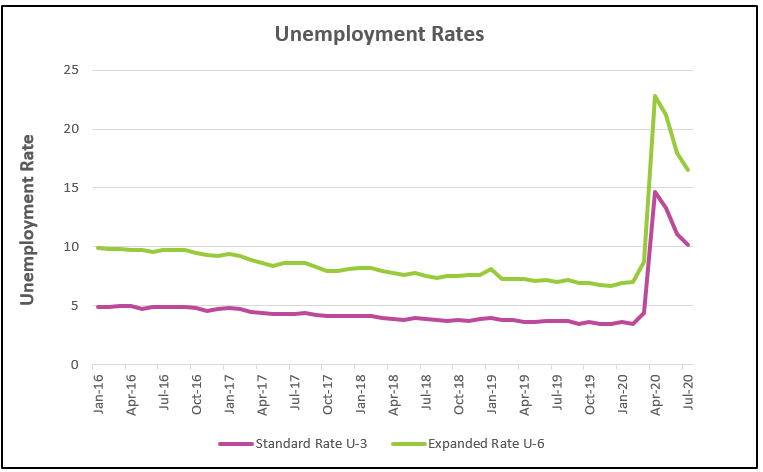 The immediate future is dimmer than several months ago when economists and policy makers predicted a severe recession would be followed by a speedy recovery. Containment measures were expected to slow the spread of COVID-19, which in turn would enable economies to reopen and consumers and businesses to resume more normal activities. More than $3 trillion in government assistance in the form of one-time checks, supplemental unemployment insurance payouts, low interest loans to assist businesses, eviction moratoriums, and many more programs were intended to sustain the economy by limiting the damage while helping consumers, states, and businesses. However, much of the assistance has expired and cases of the coronavirus continue to increase, although the rate of increase has slowed.

The University of Michigan Consumer Sentiment Index “sank further in late July due to the continued resurgence of the coronavirus.” Consumer income has increased, but not without the help of the government programs that have expired. More people are employed, but permanent job losses remain at historical highs. What should be done?

President Trump’s executive order to defer payroll taxes could help by increasing workers disposable income. Presently, workers pay 6.2% of their income in social security on income less than $137,500. President Trump’s orders would only apply to workers earning less than $100,000, and only last between September 1st and the end of the year. This money would be received immediately. A deferment just postpones when the tax is due. Will the tax eventually be forgiven? Many employers may continue to collect payroll taxes if they are uncertain of their future liability.

A payroll tax only helps the employed – not those who lost their jobs. To help the unemployed, President Trump’s order continues to supplement unemployment insurance, but reduces the amount to $400, of which $100 is to be paid by the state. It is doubtful that most states, who are struggling with their own budgets, will contribute $100, so the net result is most of the jobless would receive a weekly supplement of $300, half of what they received in July.

Last month we asked our readers to share any positive developments in their lives. A golfing friend shared that he is playing more golf since the pandemic. He is not alone. He met several others who he now plays with every week. If you have a positive story you would like to share, please email it to info@higherrockeduction.com.