The US economy continues to grow, but it is showing some signs of nearing the peak of its near record expansion as the pace of the economic growth slows. Recent economic data seem conflicting. Unemployment decreased to a near record low, but the number of people added to payrolls fell to 20,000 from 311,000. Inflation remains tame, but workers have seen their paychecks increase more than the inflation rate. Recent economic data are summarized below. My analysis is provided at the end of the blog.

On March 28th the Bureau of Economic Analysis (BEA) published revisions of the estimates in the BEA’s February report when it released its third estimate for RGDP in 2018’s fourth quarter.

The partial government shutdown prevented the BEA from including February’s outlays in its report. Here are the highlights of the BEA’s Personal Income and Outlays, February Income and January Outlays report. 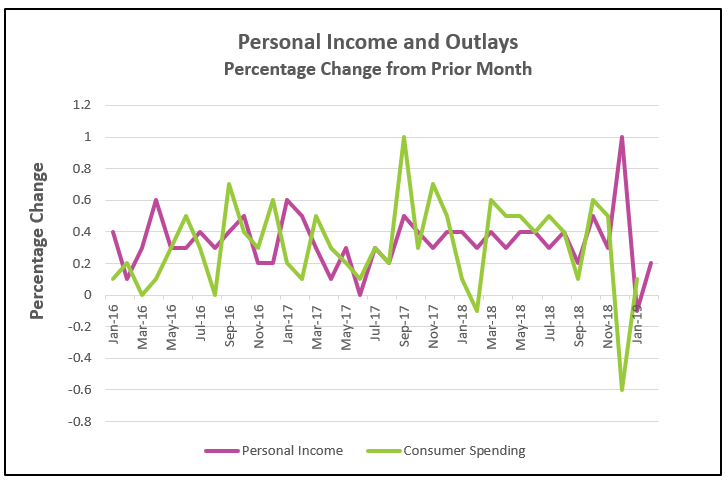 The consumer price index (CPI) remains relatively low, largely because gasoline prices have decreased in three of the past four months. The Bureau of Labor Statistics published Consumer Price Index - February on March 12th. Here are the highlights. 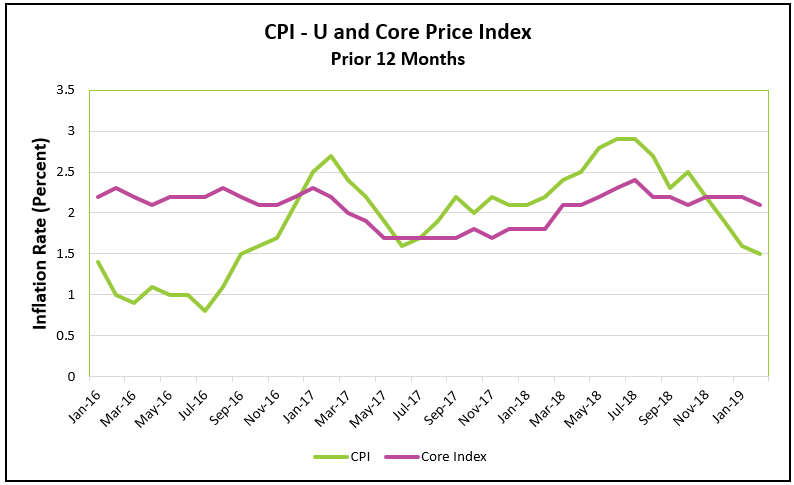 The Employment Situation - February 2019, published by the Bureau of Labor Statistics, sent mixed signals about the labor market in the United States. The country’s unemployment rate fell, but the number of people employed increased much less than most economists expected. It is likely that the temporary partial government shutdown explains the discrepancy. Here are the report's highlights. 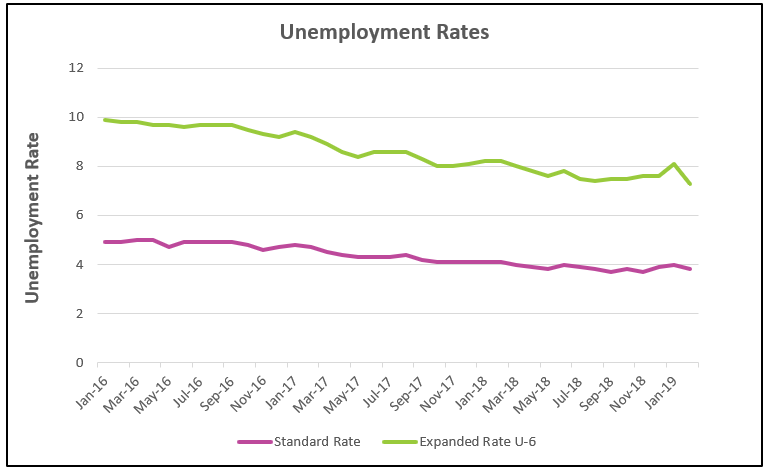 The US economy is nearing the peak of this growth cycle. Federal Reserve Chairman Jerome Powell came close to stating this a recent speech when he said, “Data arising since September suggest that growth is slowing somewhat more than expected. Financial conditions tightened considerably over the fourth quarter, while conditions have eased since then they remain are less supportive of growth than during most of 2018.” The FOMC anticipates less growth in 2019. Many economists believe there will be no interest rate increases in 2019. Some believe the Fed’s next move will be to reduce the federal funds rate to stimulate growth.

Only 20,000 people were added to US payrolls in February, sharply down from 311,000 in January. One conclusion may be the economy is slowing, but the opposite conclusion could be reached because the unemployment rate fell to 3.8% and real wages increased. The partial government shutdown resulted in many workers being added to payrolls after accepting temporary jobs during the shutdown. They were taken off the payrolls in February when they returned to their old job. Another explanation is that payroll figures and unemployment figures are derived from two separate surveys. The payroll figure is derived from a business survey, and the unemployment figures originate from a household survey. March’s employment situation report should provide a more accurate picture of the economy’s employment condition.

American households are better off because their income has increased more than the inflation rate. Real wages in February were up 0.3% and have increased every month since October. Wages increased 3.4% over the prior 12 months, the most since 2005. Income growth should continue to fuel growth in consumer spending. Yet, consumer spending has been disappointing. It fell 0.6% in December and gained only 0.1% in January. March’s Personal Income and Outlay report will be telling because it will include February and March’s consumer spending figures. Continued weakness in consumer spending would be a very bad sign since consumer spending comprises approximately 66% of economic activity.

The FOMC increased the target federal funds rate nine times since December 2008 because the Fed was concerned that tight labor conditions would trigger inflation. I confess that I concurred with them and have been surprised that inflation remains very low. Perhaps the Fed’s actions have been successful and prevented inflation from becoming a concern. Lower gasoline prices have helped hold down the overall inflation rate. The core rate has remained stable. Between October and January, the PCE price index, the Fed’s preferred measure of inflation, has fallen from 0.2 to -0.1%. while the core PCE price index has fluctuated between 0.1 and 0.2%. Presently, the FOMC appears more concerned by the possibility of a lackluster economy than inflation, which explains their patience in hiking rates.

For the economy to remain strong, monthly gains in consumer spending need to equal or exceed 0.4%, as it did in most of 2017 and 2018. Hopefully, real wages will continue to increase and consumers will spend more. Trade needs to improve. The US economy is tied to world economies and at some point the US economy would be adversely impacted if the major world economies continue to struggle, even if the current trade disputes are resolved. Improvements in the European and Chinese economies would increase the demand for US goods. Likewise, a satisfactory resolution to trade disputes would improve trade.

The US economy remains healthy, but this business cycle is showing signs of reaching its peak. Many economists believe RGDP will grow less than 1.5% in the first quarter but increase at a faster clip in later quarters. The BEA’s initial first quarter estimate will be published on April 26th. Economic growth improved following the first quarter in 2016, 2017, and 2018. Let’s hope history repeats itself.