The US economy has begun to reopen. Millions of people have returned to the workforce. Yet the number of coronavirus cases continues to increase. Some people remain cautious and maintain social distancing and only venture out when they need to. Others are tired of the containment measures and completely ignore social distancing. State and local governments are gambling that any spike in cases is manageable and the economic benefits of opening exceed the potential risk of returning to containment measures.

Americans have received and spent much of the $3 trillion transfer payments paid by the government following the passing of the CARES Act on March 27th. Earlier this week retail sales rose 17.7%. But the programs intended to assist families will expire by the end of July. Will the economy have enough momentum to continue its improvement? Probably, if the spike in COVID-19 is not high enough to discourage consumers. What if the economy stalls? Should Congress continue its transfer payments? These are issues explored in the summary and analysis section. But first, let’s review May’s economic data.

Everyone knew the US economy had entered a recession in February, but now it is official. The National Bureau of Economic Research announced that the US economy reached its peak in February, ending the record 128 month expansion. A recession is a period of economic contraction, when an economy's real gross domestic product (RGDP) decreases. The US economy began to shrink at the end of the first quarter following defensive measures initiated by governments world-wide to contain the spread of COVID – 19.

Containment measures adversely impacted most industries but hit the travel, restaurants, and health care industries hardest. (Health care was reduced because nonessential medical treatments were cancelled or rescheduled.) The report’s highlights are listed below. Readers can access the report at the Gross Domestic Product, First Quarter 2020, Second Estimate. (Note this report only includes the economic slump in the last few weeks of the first quarter. Next quarter’s RGDP report, which is scheduled to be released in August, will confirm the largest quarterly contraction recorded.)

This report includes the first full month since the COVID-19 induced economic crisis began. Economic Impact Payments and unemployment checks were received, boosting personal incomes dramatically. Personal consumption expenditures or consumer spending continued its record-breaking contraction, largely because many businesses were closed in April and consumers delayed purchases and saved more. Read the full report by following the link Personal Income and Outlays, April 2020. The highlights are listed below. 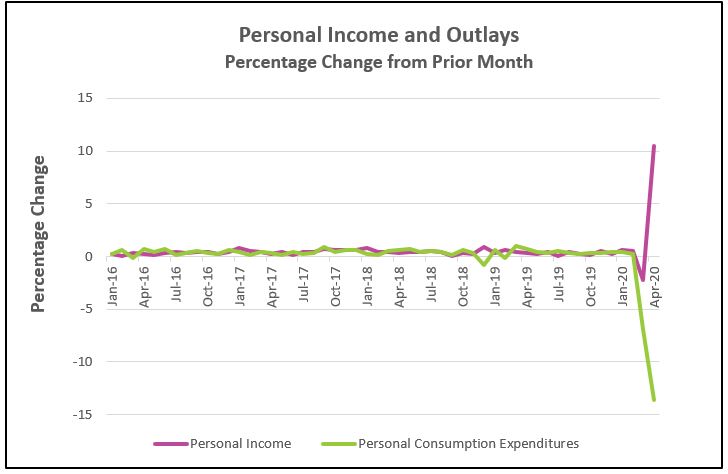 Prices have fallen for three consecutive months. Deflation is being fueled by a demand shock, or a reduced aggregate demand. Gasoline prices continued to fall in May, while food prices continued to increase. People are driving and flying less, pushing the demand for gasoline lower and gasoline prices to their lowest level since 2002. However, processing and distribution problems have contributed to food shortages and an increase in food prices. Read the full report by visiting Consumer Price Index – May 2020. Here are the highlights of this Bureau of Labor Statistics report. 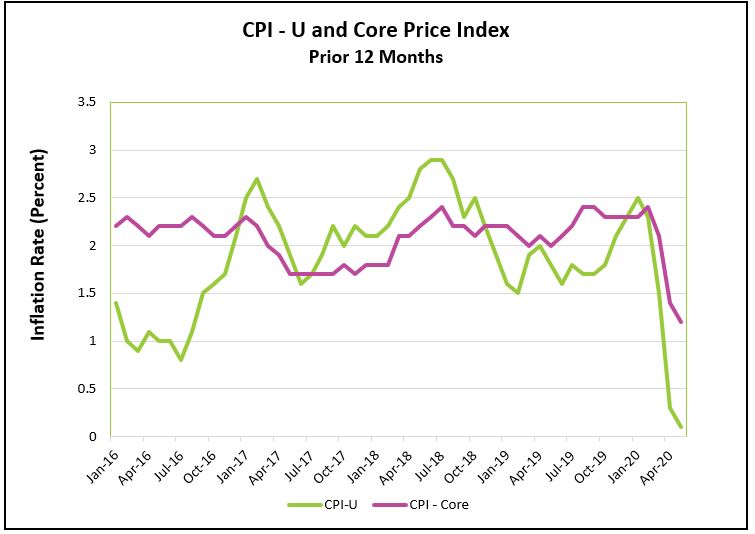 Economists and Wall Street were pleasantly surprised by May’s lower than expected unemployment rate. Many workers who had been furloughed returned to work as communities began to reopen. Leisure, hospitality, construction, education, retail, and health care benefited the most. Government workers did not fare as well. Governments, especially at the state and local level, continued to lay off workers. The highlights from The Employment Situation – May 2020 are listed below. 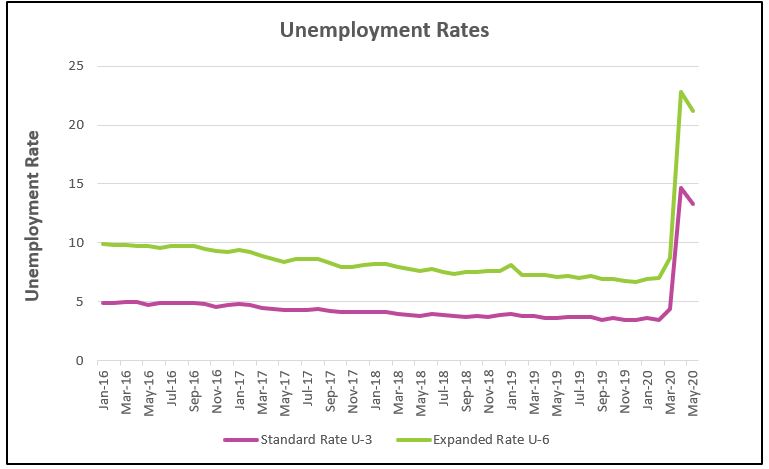 The Bureau of Labor Statistics noted that mistakes were made in collecting data. Approximately five million people reported that they were employed because they believed their layoff was temporary and reported themselves as “employed but absent from work”, a term for people who are on vacation. Technically, they were “unemployed on temporary layoff”. This group is considered unemployed. April’s survey had the same problem and the unemployment rate was closer to 20%, rather than 14.7% as initially reported. So, we should celebrate that unemployment has decreased, but we have a long way to go before we return to the employment levels in February.

Rehiring was concentrated in industries that had temporarily closed but are now reopening, including leisure and hospitality (1.2 million people), retail (368,000) and health care (312,000). That trend should continue, but not all jobs will return. Closures and bankruptcies will rise. Many restaurants operate on a tight margin and when they reopen revenues will be less because fewer people will be served due to capacity restrictions and enforcing social distancing. Restaurants will incur additional expenses to improve the safety of their employees and customers. That combination will increase the number of closures. Restaurants are not alone. Many small businesses operating on a tight margin will close for similar reasons. Those workers will need to find new jobs. Every closure delays the recovery.

State and local governments cut 571,000 workers in May. States find themselves in a difficult position. Most states mandate a balanced budget. The high unemployment rate has reduced their tax revenues, while increasing their expenses. States will be forced to cut costs, which means many state employees will lose their jobs.

The Federal Reserve predicts the US economy will contract between four and 10% in 2020. (Economic projections of Federal Reserve Board members) Wall Street and President Trump expect a quicker recovery, but that is appearing less likely. The number of COVID-19 cases continues to increase in many states. This delays the recovery because many people won't spend money traveling or visiting places with crowds. Others will be forced to spend less because of a drop in their income.

The Federal Government responded quickly to minimize the impact of the containment measures through the CARES Act when the urgency was apparent, and millions were laid off. Incomes actually rose dramatically in May, but the compensation to employees fell 7.7% making the increase sustainable only if the government continues its transfer payments. Government payments such as the economic impact payments (the payments of up $1,200 sent to individuals) and supplementary unemployment checks accounted for most of the increase. However, these programs are scheduled to end soon. The economic impact checks have been sent, and the $600 federal supplement added to weekly unemployment checks will end in July. Expect evictions to increase dramatically when the moratorium on rental evictions ends along with the loss of other Federal assistance. In addition, the Paycheck Protection Program (PPP), which helped businesses retain workers will end. Many economists fear that employees have been retained because of the PPP and when those benefits expire more workers will be let go.

The CARES Act was massive, but it is a short-run solution designed to solve a long-run problem. This will become apparent as hardship increases when the programs end. Is more needed? Many economists think so and Chairman Jerome Powell agrees. In testimony before the House Finance Services Committee, Powell urged continued fiscal assistance when he said, “I would think that it would be a concern if Congress were to pull back from the support that it is providing too quickly.”

Earlier in May, House Democrats voted to extend the assistance with a new $3 trillion stimulus package intended to extend unemployment subsidies and provide another direct $1,200 payment to families. President Trump and Republicans worry that extending them would provide a disincentive for workers to seek reemployment because many of the lower paid workers have a higher income because of the additional $600 federal weekly unemployment supplement. Those conclusions were supported by a Congressional Budget Office study that concluded, “Roughly five of every six recipients would receive benefits that exceeded the weekly amounts they could expect to earn from work during those six months”. But it also concluded that by extending the benefits, “The nation’s economic output would probably be greater in the second half of 2020 than it would be without the extension of the increase; in calendar year 2021, however, output would be lower than it would be without the extension”. The economy is still benefiting from the initial $3 trillion sent to households and businesses. When the subsidies disappear the true strength of the economy will be revealed.

Chairman Powell has also made it clear that the Federal Reserve will do its part by doing all it can to preserve liquidity and keep interest rates near zero. But the Federal Reserve does not make grants and borrowers must still qualify for a loan. Lowering rates and making credit more available may buy time, but these actions will not bring the consumer back, and for many companies, survival depends on the customer returning sooner rather than later. Fearful consumers are not likely to purchase a car or home because interest rates dip less than 1%. But without a cure or vaccine the risk of reopening too soon is that the economic contraction would deepen and lengthen if a spike in cases of COVID-19 makes it necessary to reimpose restrictions. It would take even longer to regain the public’s trust needed to reopen the economy, especially if the government assistance included in the CARES Act expire.

It is important that Congress remains flexible. Reopening will eventually revive the economy. But progress will stall if a spike in coronavirus cases forces new containment measures or discourages people from venturing into the market. A new stimulus package or the extension of the current programs may be needed. But supplemental checks added to unemployment checks should be phased out to avoid discouraging workers from seeking employment. Ultimately, American ingenuity will prevail. Already many companies have adapted to the “new” normal by introducing new goods and services or expanding the goods and services that consumers have been introduced to during the pandemic. Included are delivery services (Amazon), companies that benefit from spending more time at home, whether working (Zoom) or in leisure (Netflix). These companies are hiring many of those who lost their jobs. Entrepreneurs will open new businesses that hire millions of workers and cater to the new demands. It is just a question of when.