Thank God for the vaccines! All of us are extremely grateful to all who contributed to developing a COVID-19 vaccine in record time. It will save thousands of lives and signal the beginning of an economic recovery for many. But COVID-19 still threatens the US economy.

Consumer spending continues to grow, and businesses continue to hire workers, but economists worry these trends are not sustainable if the spike in COVID–19 cases continues. Households and businesses share this concern. Growth in consumer spending slowed and consumers began to dip into their savings. Businesses hired less than half the number of people they did in October. Shifts in employment suggest companies believe people will shop less in the traditional ways. Reimposed containment measures will discourage many from celebrating the holiday season in our traditional ways. Jobs at warehouses and delivery services grew the most, while retail and service jobs did not grow as much as expected during the holiday season.

Incomes of many households are threatened by expiring federal assistance programs. Many economists, including Federal Reserve Chairman Jerome Powell, believe additional fiscal stimulus is needed to continue the momentum of recovery into next year. Most of Congress concurs, and representatives are expected to reach a decision soon. But to understand the problems and decisions the most recent economic numbers need to be reviewed.

The US economy rebounded in record fashion in the third quarter, according to the BEA’s second estimate, which was little changed from the advance estimate released in October. The economy remains below pre-pandemic levels but was helped by the reopening of the economy. Consumers and businesses increased spending. Households spent much of the money received from the federal government as part of the CARES Act passed in March. Personal income fell in the third quarter, largely because many of the federal government subsidies to bolster the economy expired in July. The economy’s growth helped propel business profits higher. The revised results are summarized below. Readers can access the full report Gross Domestic Product, Third Quarter 2020, Second Estimate.

Consumers continue to spend, albeit at a slower rate, even though incomes fell in October. Households have reduced spending in leisure activities such as restaurants and travel because they are restricted by the pandemic, but the added income has spurred many families to purchase new cars and make home improvements. Overall spending has rebounded to 98% of before the pandemic. Spending on durable goods is nearly 8% above where it was just before governments imposed restraining orders in response to COVID-19. Spending on services remains 94% of pre-coronavirus levels.

Personal income fell. Much of the decrease is attributable to more than a $200 billion decrease in transfer payments such as unemployment insurance. Wages and salaries remain below pre-pandemic levels but have increased every month since April. However, many families remain very dependent on government assistance, which was more than $200 billion less in October than September. Many of these programs are scheduled to expire at the end of December. Read the full report Personal Income and Outlays – October 2020. The highlights are listed below. 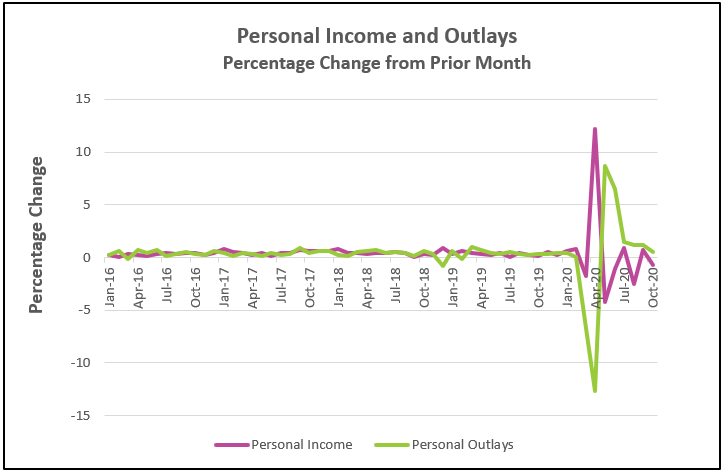 Inflation remains tame. Prices rose modestly in November. Emerging from the pandemic has increased the demand for many goods and services and contributed to modest inflation. Read the full report Consumer Price Index – November 2020. Here are the highlights of the report. 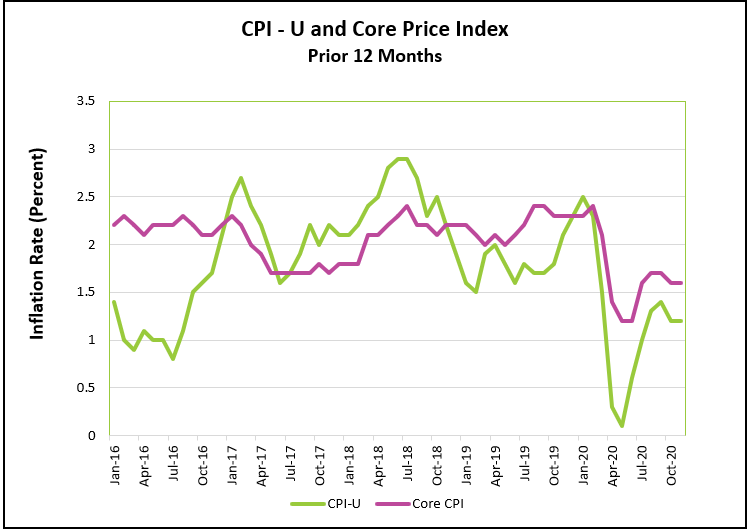 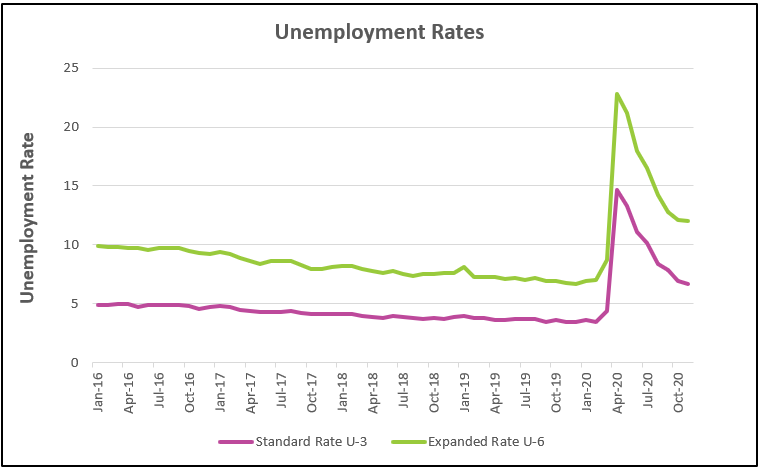 A surge in COVID-19 cases has jeopardized the US economy’s recent recovery and could propel the economy back into a recession. States and local leaders are again establishing containment measures to slow the spread of the coronavirus. Ultimately, an economic recovery depends on containing the pandemic to the point people feel comfortable venturing into public places.

The record-breaking economic growth in the third quarter was inevitable when the containment measures from March and April were lifted. However, the extent of the contraction between March and April prevented the third quarter’s output from achieving levels it did at the end of 2019. The economy remains 3.5% smaller than at the end of 2019. It is unlikely that growth will continue at the pace it did in the third quarter. The advance estimate for 2020’s fourth quarter will not be available until January 28, 2021, but recent statistics point to a slowing economy. Without renewed help, many families will suffer and the impact would reverberate throughout the economy. It is true that many people are better off now than when the pandemic began. The Federal Reserve reported that the net worth of the average household has grown to record levels, thanks to record highs in the stock market and appreciating home values. (See Federal Reserve chart.) However, much of the gain has resulted from unsustainable government borrowing and spending. Reduced demand would eventually cripple the economy by slowing hiring and reducing profits.

The labor market is beginning to lose its momentum. In November, the unemployment rate fell 0.2% and 245,000 people were added to payrolls, but both figures are not as robust as the past few months. Approximately 10 million people who lost their jobs during the pandemic remain unemployed. The lower unemployment rate is partially explained by a smaller labor pool because 448,000 people who want to work have become discouraged and stopped looking for a job. Because they are not seeking employment, they would not be considered unemployed and are excluded from the U-6 unemployment rate. Initial filings for unemployment insurance have increased for three of the past four weeks. The Department of Labor reported that the week of December 5th had the largest increase in unemployment insurance claims since March.

Critics believe the US cannot afford another round of government transfer payments similar to the CARES Act. There is no doubt that growth of the deficit is unsustainable at today's rate of growing from $1 trillion to $3 trillion in the past year. But larger deficits are normal when an economy slows because government spending increases while tax revenues subside. Fortunately, low interest rates make borrowing more attractive for the federal government, so many economists believe there is sufficient capacity to increase borrowing. However, this view is short-sighted. Eventually, the debt will mature. How does the government repay its debt? By refinancing it and issuing more debt. If rates are higher when refinanced, then the deficit will balloon further out of control. However, now is not the time to curtail spending. Deficit spending is appropriate during periods when fiscal stimulus is needed to lift the economy. Greater budget discipline will be needed when we emerge from the recession.

In the coming months, weakness may be aggravated by the expiration of many government programs which prevented the economy from contracting more than it did at the early stages of the pandemic. If many of the assistance programs expire, household income will fall, and consumer spending is likely to suffer, thereby threatening the recovery. Approximately 12 million people will lose their unemployment subsidy on December 26th. Congress is debating new assistance. It is likely to contain $900 billion in relief and include direct payments to households and supplemental unemployment insurance. It is also likely that President-elect Joe Biden will resurrect the programs to help homeowners, small businesses, tenants and students. Several of the programs scheduled to expire are discussed below:

The Federal Reserve has done its job by maintaining near zero percent interest rates and assuring that banks have the funds to lend. But most economists believe an accommodative monetary policy is not enough. But an aggressive fiscal policy is also needed. The recovery is threatened if Congress fails to pass another stimulus package. Federal Reserve Chairman, Jerome Powell has repeatedly encouraged Congress to act now. Congress acted quickly when it passed the CARES Act soon after containment measures all but shut down the economy. Economists agree that the economy would have deteriorated much more without the $3 trillion investment by the federal government. Consumer spending and employment increased after households received the one-time stimulus checks, a weekly $600 unemployment insurance supplement, and other measures. Income and spending fell following the expiration of these programs in July. They increased again when a $300 weekly federal unemployment insurance supplement was introduced. More is needed now to help those in great need and limit the threat of a double-dip recession.

The health care community and scientists have done their part by developing a vaccine. By the end of the first quarter over 100 million people should be vaccinated, which will boost consumer confidence. In time, as more people are vaccinated, a pent-up demand for those services most hurt by the pandemic will be released. People will celebrate and begin to travel, visit their friends and family, dine at their favorite restaurants, attend movies and other events. Workers will return to their offices. Employment will increase. Hopefully by 2021’s third quarter, the economy will be booming! But we must continue to be diligent and do our part by wearing a mask and responsibly practicing social distancing. By working together, the economy will fare better and continue its improvement, but behaving irresponsibly will force our leaders to curb economic activity, which will slow the economy, and delay the recovery.

Next month’s State of the US Economy will include Higher Rock’s scorecard for 2020’s predictions and provide predictions for 2021.