A trade war, and slowing global economies have hurt the industrial sector, but the service sector of the United States has been more resilient and helped the economy remain relatively healthy over recent months. Approximately 80% of the US labor force work in the service economy. Household income is rising, and people feel secure in their employment status. Households are expected to continue spending more. Consumer spending remains the US economy’s primary driver. Yet, manufacturing is suffering. In the first half of 2019, industrial growth has been anemic. On September 17th the Federal Reserve reported that industrial production increased 0.6% in August. This is contrary to most other data and probably not indicative of a change because several other factors (such as Hurricane Barry) restrained production in July. The trade war and a slowing global economy continue to hurt the industrial sector. The economy is showing signs of reaching the peak of its record 10-year expansion, but the economy will continue to grow at a slower pace for several quarters spurred on by the health of the service sector. However, the industrial sector and service industries depend on each other and further deterioration of the industrial sector would harm the economy. Below are reviews of four publications that summarize macroeconomic trends in the US economy. We examine the relationship between the industrial and service sectors.

Households continue to spend, which is contributing greatly to the economy’s strength. Consumer spending or personal consumption expenditures (PCE), accounts for approximately 66% of economic activity in the United States. (Read our lesson Gross Domestic Product – Measuring an Economy’s Performance to learn more about the importance of PCE.) Over an extended period, consumer spending is directly tied to household income. Watching the trends in these figures provides important insights into the economy’s health. The Commerce Department released its report Personal Income and Outlays, July 2019 on August 30th. The highlights are listed below. 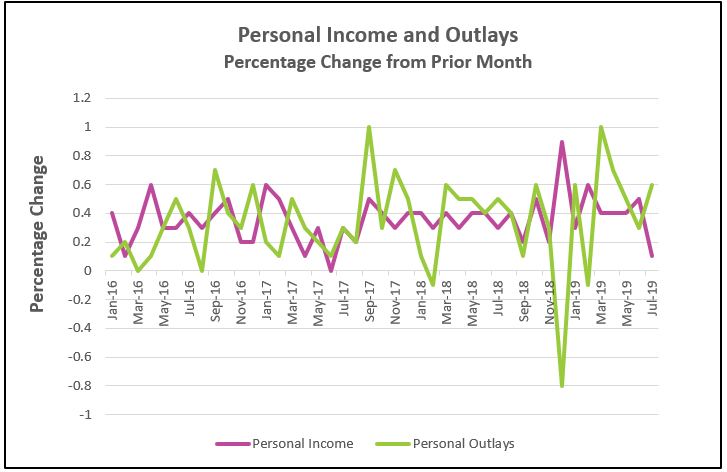 Inflation gained momentum in August. Earlier the PCE price index was mentioned. The Bureau of Labor Statistics provides other measures of inflation – the consumer price indexes. These measures are more often quoted in the press, although they are not the Federal Reserve’s preferred measure of inflation. (The PCE price index is preferred.) Both measures tend to move in the same direction. Read the Bureau of Labor Statistics’ (BLS) full report by visiting Consumer Price Index – August 2019. Here are the highlights of the BLS report. 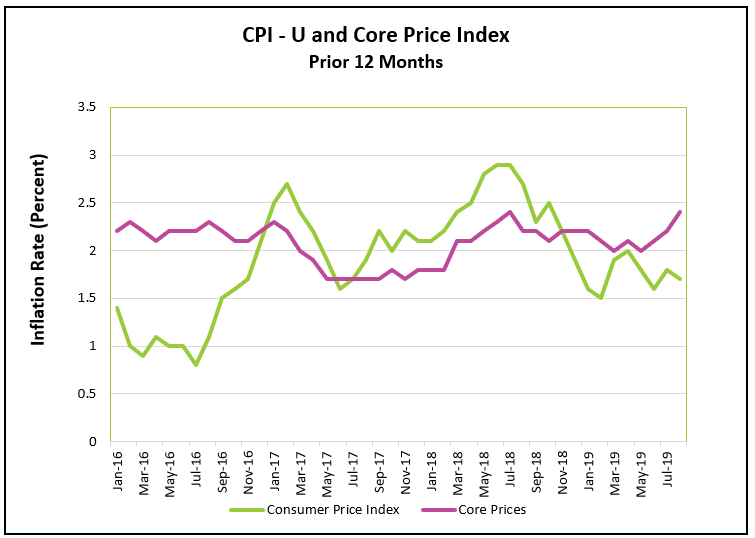 Employment conditions in the United States continue to be healthy - but are showing signs of weakening. Readers can access the BLS report by going to The Employment Situation – August 2019. The report’s highlights are listed below. 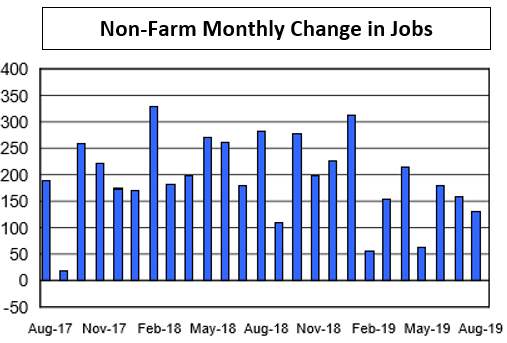 The US economy’s record expansion is showing signs of reaching its peak. GDPNow, the Federal Reserve’s model that predicts growth in the GDP, projects the economy to grow 1.94% in the third quarter. A suffering industrial sector has contributed to the slower pace. Fortunately, the economy largely depends on the service sector. Over 80% of US workers are employed in the service industries, and service companies and the government contribute over 80% to the US GDP. Does this mean the industrial sector is not important? Absolutely not. Most service jobs depend upon manufacturing. For example, health care providers depend on very sophisticated equipment to care for their patients. However, analysts sometimes overstate the importance of the industrial sector. I believe the continued strength of the US economy is largely because it is so dependent on services. It helps explain the continued growth in consumer spending and strength in the employment figures.

A service industry is less susceptible to tariffs. Most services are not exported. Those that are, have not been taxed. However, service companies will be impacted indirectly by tariffs. When workers lose a manufacturing job, their families have less money to spend on services. Fortunately, disposable income continues to increase more than inflation, and the unemployment rates remain near record lows.

US farmers have been hit very hard following China’s imposition of 25% tariff on agricultural products. Farmers discuss how the tariffs have impacted their communities and businesses in this video published by The Wall Street Journal. China imported 39 million tons of soybeans from the US in 2017. That fell to 16.6 million in 2018 and is expected to equal 10 million tons by the end of 2019. US farmers have been hard pressed to replace this market, resulting in lower prices and a higher inventory. Meanwhile countries like Brazil have taken advantage of the situation. In the video, farmers express concern that it will take years to rebuild harmed relationships. But the damage is not limited to agriculture and the United States. Many service companies in these farming communities have also been hurt. On September 4th, the Federal Reserve released its study, Does Trade Policy Uncertainty Affect Global Activity?.  It concluded the trade war reduced global GDP by 0.8% in the first half of 2019.

Tariffs will begin to impact inflation – if they have not already done so. The 12-month core inflation rate has increased at an accelerated rate in May, June, July, and August. Tariffs increase the price of goods because importers pass the cost of tariffs through to consumers. Even the price of products produced domestically, the same goods tariffs are designed to protect, will increase because manufacturers must pay more for imported raw materials and intermediate goods. Prior to September 1st, most tariffs were placed on imported intermediate goods. Much of the cost of these tariffs have been absorbed by manufacturers. But on September 1st, a 15% tariff was imposed on consumer goods including clothing, sporting goods, and tools.

News Update - Good news! The Federal Reserve reported On September 17th that industrial production increased 0.6% in August, matching the largest increase since November 2018. (Read: Industrial Production and Capital Utilization.) Mining had the greatest increase of 1.4% following a 1.5% decrease in July. Mining recovered from July’s lost oil production related to Hurricane Barry in the Gulf of Mexico. Business equipment increased 1.0% following several months of minimal increases. Does this report change my overall view? No. This is counter to current trends, and probably does not mark the beginning of a rebound. Industrial output is up only 0.4% since the beginning of 2019.

The FOMC is concerned the economy is near its peak. It decreased its target for the Federal Funds rate at its last two meetings as an effort to prolong the expansion. Expect consumers to continue spending and the economy to continue its sluggish growth for as long as consumers remain confident their jobs are secure, and their incomes will continue to grow.