The US economy continues to improve as it reopens for business. Many workers continue to be rehired after being furloughed. Wages and salaries paid by private companies are increasing. Households continue to spend. But the reason for the contraction remains – COVID-19 cases have not diminished. Many businesses are in survival mode. Some are failing. The number of people who have permanently lost their job has continues to rise at an alarming rate. Many households that depended on federal assistance that has ended such as the unemployment insurance supplement and stimulus check are now forced to dip into their savings. The debate among our leaders is if additional fiscal stimulus is needed. Should the government resume paying supplemental unemployment? Should it issue another round of stimulus checks? Many economists, including Federal Reserve Chairman Jerome Powell, believe now is not the time to cut off struggling households. But some policy makers argue that no additional stimulus is needed. Deficits are out of control, and the government needs to resist increasing spending. What should be done? These options are discussed in the Summary and Analysis section below.

Let’s look back at the second quarter using the Bureau of Economic Analysis’s (BEA) second estimate of economic growth. The quarter began with states taking drastic containment measures, including closing many businesses and encouraging people to remain at home. The quarter ended with policy makers debating how to restart the economy while limiting COVID’s harm. Meanwhile cases and deaths grew. People became more apprehensive about their health, their jobs, and the future. Only an increase in federal government spending and a smaller reduction in net exports contributed to a higher RGDP. All other components were weaker than the first quarter. Readers can access the report at the Gross Domestic Product, Second Quarter 2020, Second Estimate.

Consumer spending increased because businesses continued to re-open and consumers ventured into the marketplace more frequently, but it remains below pre-pandemic levels. Personal income rose for the first time since April when households received stimulus checks. It is encouraging that compensation to employees continues to rise because it is indicative of a sustainable recovery. Read the full report by following the link Personal Income and Outlays – July 2020. The highlights are listed below. 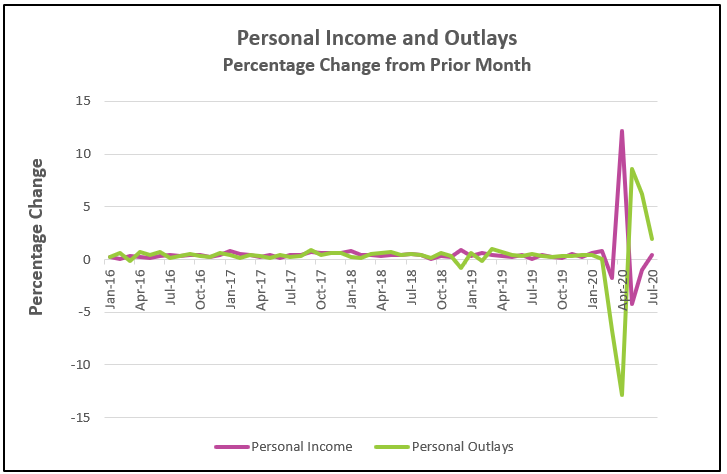 An increase in the demand for goods and services that had been thwarted by the containment measures continued to pull prices higher in August. Gasoline prices increased for the third consecutive month but remain lower than a year ago. Increases in core index prices lessened in August following July’s increase, which was more than any month since January 1991. Economists prefer the core price index because it is more representative of price trends since it excludes volatile food and energy prices. Read the full report by visiting Consumer Price Index – August 2020. The report's highlights are listed below. 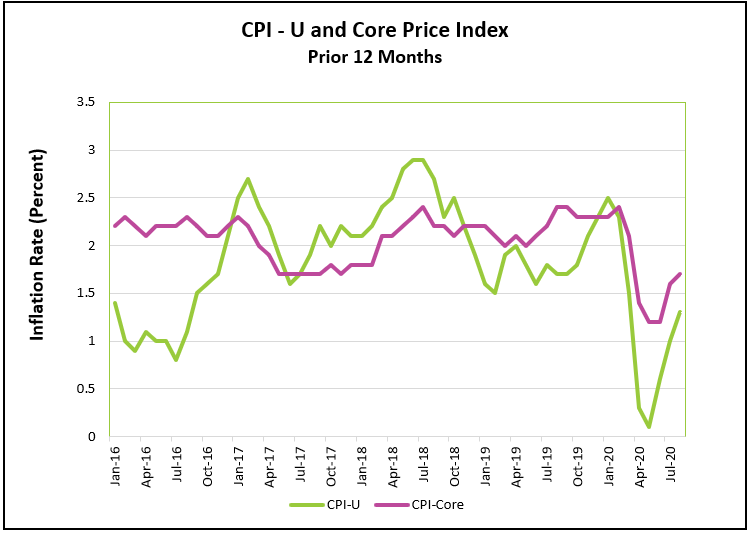 The jobless rate has continued to fall since it peaked at 14.7% in April – but remains much higher than in February when it reached a historic low of 3.5%. The unemployment rate has fallen for five consecutive months as communities continue to reopen following the imposition of containment measures in March to combat COVID-19. But people are returning to work at a slower pace than in July because employers appear reluctant to hire when COVID continues to spread and states and cities reconsider reopening. The stubbornly high number of permanent job losses is indicative of businesses shutting down. The highlights from The Employment Situation – August 2020. are listed below. 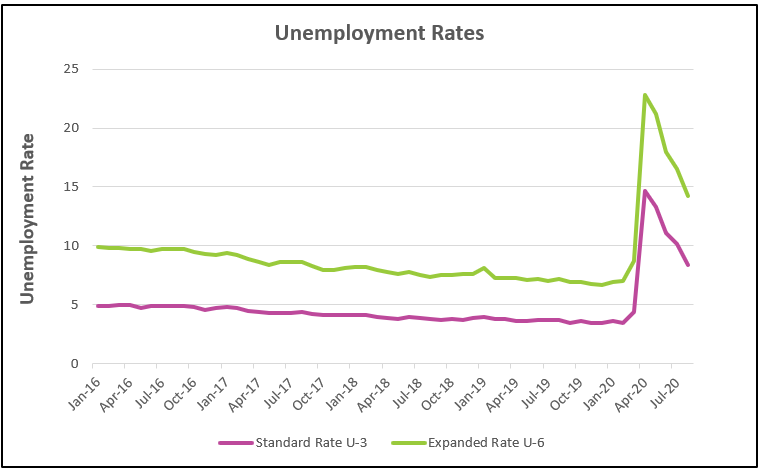 Overall, the economic news has been positive. Unemployment dropped more than most economists predicted. Consumer spending continues to increase. Income is higher than last month. However, the most important statistic is alarming. COVID cases continue to increase, albeit at a slower pace than in July. A full recovery is impossible when consumers, fearing contracting the disease, are hesitant to venture into the marketplace, or when wage earners fear permanently losing their jobs.

Other than controlling COVID-19, getting people back to work will be the most important factor in returning to a strong economy. It is encouraging that 1.4 million people returned to work and 1.0 million worked in the private sector. (It should also be noted that the 1.4 million included 238,000 temporary workers hired by the federal government to assist with the 2020 Census. These will be included among those who lost a job next month.)

Many households continue to struggle. 13.6 million people remain unemployed, which is 11.5 million more than in February. In July, the US Chamber of Commerce reported that 13% of small businesses remain closed, of which 12% are temporary and 1% are permanent. More than half of the small businesses surveyed (56%) worry about closing permanently. Business closures and permanent job losses continue to be a major concern because these jobs are slower to replace.

The Federal Reserve has done its job by maintaining near zero percent interest rates and assuring banks have the funds to lend. Furthermore, the Fed announced that it is changing its policy regarding inflation. Translation – interest rates will remain low for a long time. No longer will the central bank automatically tighten its policy when inflation approaches 2%. This move will have little direct impact in the immediate future – but it does send a signal. Prior to the pandemic the inflation rate had crept up to 2%. In the past, the Federal Reserve was more likely to raise its rates to slow price increases. Businesses and investors may have delayed expanding or investing fearing higher rates. The new policy assures businesses and investors that they should not defer investing because they anticipate higher rates. However, the Fed’s actions have limitations. They do not put money in the pocket of consumers. The Fed does not set tax rates. An expansionary monetary policy is not enough. Additional fiscal stimuli are needed. Congressional action is needed.

Congress acted quickly when it passed the CARES Act soon after containment measures all but shut-down the economy. Economists agree that the economy would have deteriorated much more without the $3 trillion investment by the federal government. Consumer spending and employment increased after households received the one-time stimulus checks, a weekly $600 unemployment insurance supplement, and other measures. Chairman Jerome Powell has urged Congress to continue furnishing fiscal stimuli. President Trump concurs. Yet Congress is unable to reach an agreement on what should be done and the magnitude of the stimulus. The House of Representatives passed another similar $3 trillion relief plan, but Senate Republicans have argued that is too generous, and spending should be limited to $1 trillion. (Democrats have since reduced their proposal to $2.2 trillion, while several Republicans, including the President, would accept $1.5 trillion.)

The current fiscal year ends September 30th, and Congress will need to reach a decision on next year’s budget. Will history repeat itself? The federal government passed massive spending measures to pull the economy out of the Great Recession in 2009. At the time unemployment was 9%. The Obama administration wanted to maintain an expansionary fiscal policy, but the Republican led House of Representatives urged restraint because they were more concerned about the deficits than the unemployed. Many economists believe this action prolonged the Great Recession. A similar restraint would delay this recovery.

There is no doubt growth of the deficit is unsustainable at today’s rate. The Congressional Budget Office (CBO) recently reported that the total debt held by individuals will exceed GDP this year. (The total debt, including the debt held by the central bank exceeds GDP today.) The deficit has increased from $1 trillion to $3 trillion in the past 11 months. This is normal when the economy slows because government spending increases while tax revenues subside. Fortunately, low interest rates make borrowing more attractive for the federal government, so many economists believe there is still room for borrowing. This view is short-sighted. Eventually, the debt will mature. How does the government repay its debt….by refinancing it and issuing more debt. If rates are higher when refinanced, then the deficit will balloon further out of control. However, Chairman Powell is correct when he said in an interview on NPR that now is not the time to confront this problem. Fiscal stimulus is still needed. “The time to start working on fiscal sustainability is not right now when we have so many people in need. In fact, now, to the extent you can keep people in the workforce, keep them in their houses, they're going to be able to contribute more to the economy and they're going to be paying taxes. And it's going to be, you know, you'll have a stronger, faster growing, more resilient economy coming out of it if you do keep these people connected to the economy. It'll cost money now, but it will pay dividends later.”

Deficit spending is appropriate during periods when fiscal stimulus is needed to lift the economy. Greater budget discipline is needed when we emerge from the recession. Until then, we can do our part to improve the economy by helping curb COVID-19 by wearing a mask and responsibly practicing social distancing. By working together, the economy will fare better and continue its improvement, but behaving irresponsibly will force our leaders to curb economic activity, which will slow the economy, and delay the recovery.