Tuesday, January 30, 2018
The US economy grew at 2.3% in 2017. It picked up steam in the second and third quarters when growth exceeded 3%. The drop to 2.6% in the fourth quarter is not alarming because the overall strength remains strong. Unemployment has fallen to its lowest level since 2000. Personal incomes are increasing. Inflation remains low, but there are signs inflation is increasing because wage increases continue to outpace inflation.

Consumer confidence dropped slightly in December, but remains close to the high it achieved in November because consumers are slightly more pessimistic about business and job prospects. (Read the Conference Board’s Consumer Confidence Survey.)

The FOMC meets later this week. A slowing of economic growth and low inflation figures increase the likelihood that the FOMC will delay increasing the federal funds rate further.

Economic growth (RGDP) slowed to 2.6% in the fourth quarter of 2017 according to the BEA’s initial estimate that was released Friday, January 26th. This is the lowest increase since the first quarter of 2017 and surprised most economists. The primary reason for more moderate growth was a decrease in private inventory investment.

Economic growth was less than President Trump’s goal of 3.0%, but remains above 2.0%, which is more typical this late in a business cycle. 2017 was a good year despite the drop in the fourth quarter. RGDP increased 2.3% in 2017, up from 1.5% in 2016. Corporations have benefited from the steady growth. Earnings are higher which in turn has fueled continued record prices in the stock markets. The economy has grown nine years according to the National Bureau of Economic Research. Only the 1961 - 1969 and 1991 - 2001 expansions have been longer. Read the full report at BEA Gross Domestic Product: 4th Quarter 2017 (Advanced Estimate).

Consumer spending (PCE) remains strong, even though it fell from 0.8% to 0.4% between November and December. After adjusting for inflation consumer spending rose 2.7% in 2017. The savings rate dropped to a 12 year low of 2.4%, which suggests consumers are confident the economy will continue to thrive. Their confidence has increased given the recent growth in wages, lower unemployment, and record closings on the stock exchanges. I hate to be negative, but at this stage in a business cycle, consumers should be focusing on saving rather than spending in order to provide insurance for when the cycle begins to contract.

Inflation, as measured by the PCE price index fell from 1.8% to 1.7% between November and December. More importantly, the core index remained unchanged at 1.5%. The core price index measures the inflation rate of all items except food and energy. Most economists view the core inflation rates as more reliable when gauging long-term trends because they do not include the large fluctuations of food and energy prices. The PCE price index is favored by the Federal Reserve, making it more important than the more commonly used consumer price index, when evaluating monetary policy. The Federal Reserve’s annual target is 2%. Normally a growing economy adds pressure to wages, which in turn increases inflation. The Federal Open Market Committee would like to see a continued increase in wages. 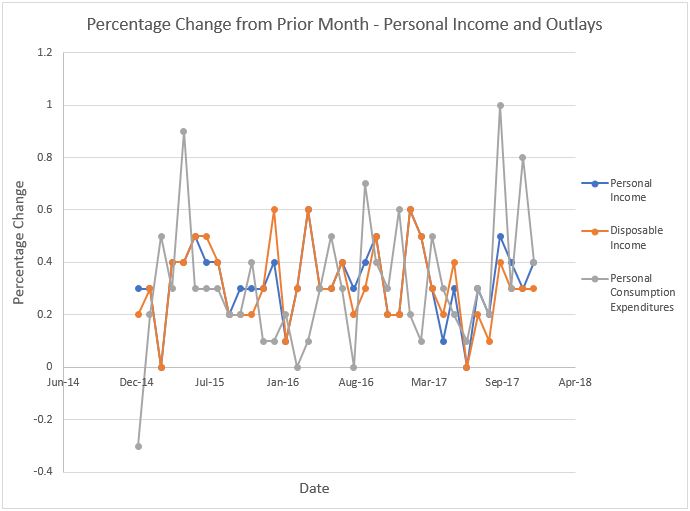 The Bureau of Labor Statistics reported that prices increased 2.1% during 2017 and 0.1% in December. Many economists were surprised by the 0.3% increase in December’s core index. For the past 12 months the core index is 1.8% higher. Gasoline prices are the primary reason for the difference between the indexes. You are probably aware of the wide fluctuations in gasoline prices over the last quarter if you drive in the United States. In October, gasoline prices decreased 2.4%. This was followed by a 7.3% increase in November and a 2.7% drop in December.

The Bureau of Labor Statistics reported that the producer price index (PPI) decreased 0.1% in December, but increased 2.6% over the past 12 months. The PPI measures inflation for suppliers. It is the weighted average cost of a basket of goods and services sold in the wholesale, manufacturing, and commodity markets. The PPI is a leading indicator and frequently signals future changes in the CPI. Businesses may try to pass some of their cost increases (which is measured in the PPI) through to the final buyer (which is measured in the CPI). While December’s figure is lower, the overall PPI trend has been higher since August. 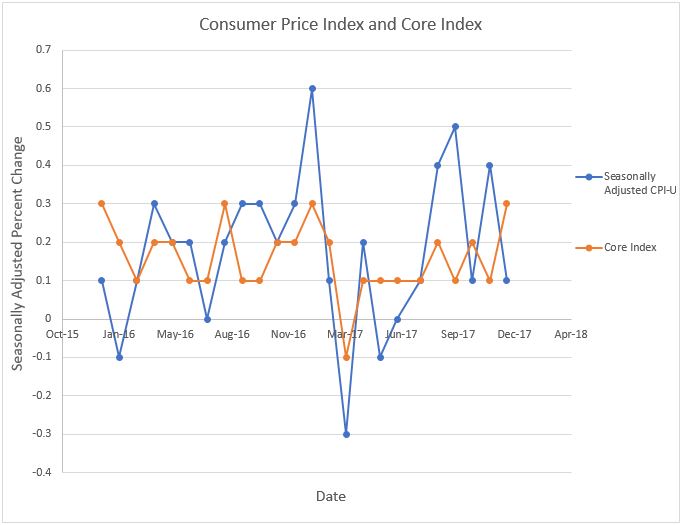 More people have either found jobs or acquired better jobs in 2017. The seasonally adjusted unemployment rate equaled 4.1% in November and December. Unemployment decreased 0.6% over the past 12 months. Other unemployment figures have also improved. Underemployment dropped from 8.3% to 8.1%, indicating that people who had settled for a part-time position or a job that is beneath their skill level are now being hired in preferable jobs.

The 148,000 jobs added was disappointing in December since it followed an increase of 252,000 in November. 2.1 million jobs were created in 2017. Health care, construction, and professional office personnel were some of the largest gainers, while retail was hurt the most, particularly department and general merchandise stores.

The unemployment rate continues to be below what most economists consider the full employment rate of approximately 5 percent. The tightening of the labor market has pushed wages higher, but not as much as most economists predicted. In December, the average hourly earnings equaled $26.63 which is $.09 more than November. Average earnings increased 2.5%, or $0.65 higher over the prior 12 months. Most economists believe pressures on wages should increase into 2018. 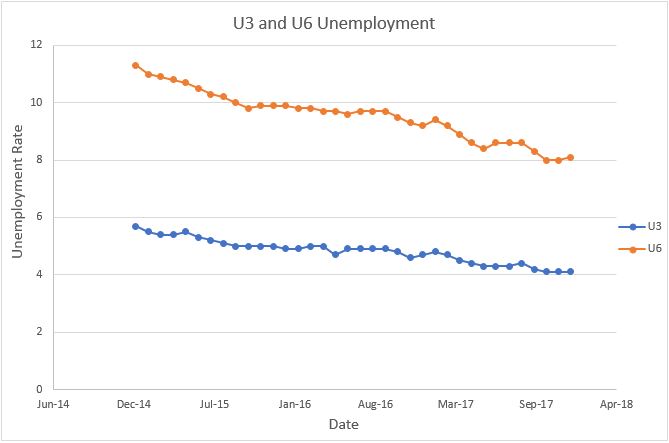 The Federal Reserve Bank of St. Louis reported in December that the US federal debt exceeded the nation’s gross domestic product by 3.8 percent at the end of the third quarter in 2017. This is up from 3.1 percent in the second quarter. What does this mean? The best measurement for a debt’s affordability, whether it is a family purchasing a new home, a business, or a country, is the relationship between debt and income. The US national debt now exceeds its income and the trend is becoming more alarming. In 2016, Germany’s ratio was approximately 68%, and the UK’s was 88%. Countries that recently had financial problems had higher debt ratios. Greece was estimated at 181% and Italy’s debt ratio equaled 132%. In 2015, Japan debt to GDP ratio was a whopping 238%. The large debt is one reason the Japanese economy has experienced minimal growth for over a decade. (Unless otherwise noted, these are 2016 estimates. Source: CountryEconomy.com)