Last month, the Federal Reserve reduced its target federal funds rate 0.25% as a preemptive strike because it fears the weakening of the economy. Economic growth has slowed, particularly in agriculture and manufacturing where the impact of tariffs hit the hardest. Real gross domestic product (RGDP), the most common measure of economic growth, slowed from 3.1% in the first quarter to 2.1% in the second quarter, causing concern among businesses and investors. The Dow Jones Industrial Average has recently fallen over 1,000 points. However, it is likely the economy’s expansion will persist because consumers continue to spend, people are still being added to payrolls and inflation remains low.

Consumer spending or personal consumption expenditures (PCE), accounts for approximately 66% of economic activity in the United States. (Read our lesson Gross Domestic Product – Measuring an Economy’s Performance to learn more about the importance of PCE.) Over an extended period, consumer spending is directly tied to household income. Watching the trends in these figures provides important insights into the economy’s health. The Commerce Department released its report Personal Income and Outlays, June 2019 on July 30th. The highlights are listed below. 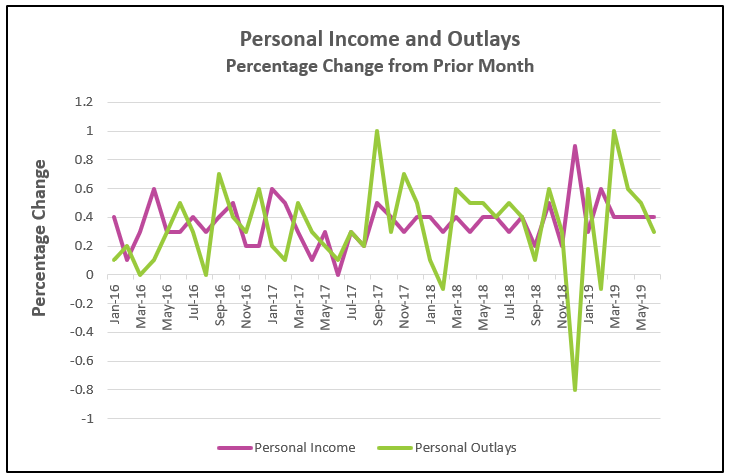 Inflation gained momentum in July. The consumer price index increased 0.3% in July, up from 0.1% in June and May. The core index sustained the largest two-month increase since 2006 following its second straight month of increasing 0.3%. Increases equaled 0.1% every month between February and May. Read the Bureau of Labor Statistics’ (BLS) full report by visiting Consumer Price Index – July 2019. Here are the highlights of the BLS report. 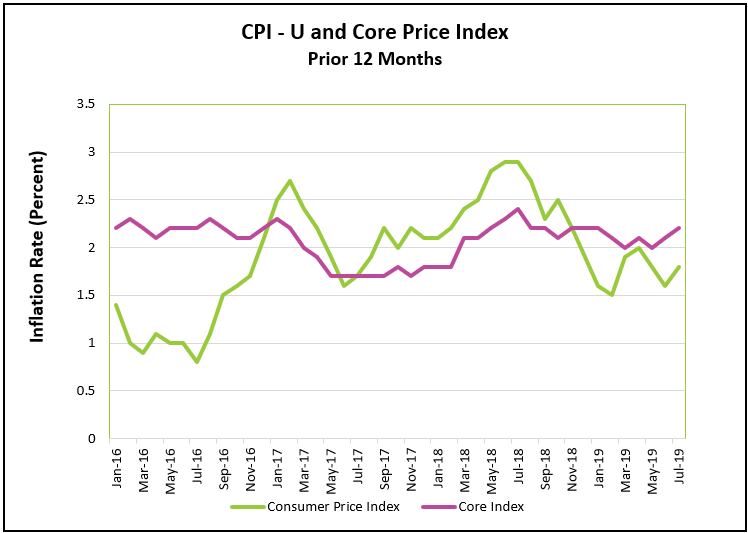 Employment conditions in the United States continues to be very healthy. July’s unemployment rate remained 3.7% and 164,000 people were added to payrolls. Readers can access the BLS report by going to The Employment Situation – July 2019. The report’s highlights are listed below.

In July, the US economy entered the longest expansion recorded. It has been just over a decade since the Great Recession officially ended. (The National Bureau of Economic Research is the official monitor of recessions. Visit their web site at https://www.nber.org/cycles.html)

How long will this expansion continue? The BEA reported that the pace of economic growth slowed to 2.1% in the second quarter. However, the most important components – consumer spending, disposable income, and job creation – had a positive influence on RGDP. Sustained strength in these areas should bring continued prosperity into 2020 – but at a reduced rate.

But investors are concerned. The stock market has been volatile since the beginning of July. On July 1st, the closing Dow Jones Industrial Index equaled 26,717.43. It rose to a record high of 27,359.16 on July 15th, only to fall to 25,962.44 on August 20th. Why is the market so volatile? Why has the average dropped over 5% in just a little over a month? The expectation of future earnings drives stock prices. Stock prices appreciate following  announcements that positively influence the expectation of future earnings. Conversely, prices depreciate when the macroeconomic trends reduce these expectations. (Read Supply and Demand – Understand the Dynamics of The Stock Market.) The economic news has been mixed, which partially explains the market’s volatility. Is the glass half full, or half empty? I will let you decide after reviewing both perspectives.

On the negative side...

Future growth in hiring and income will be negatively impacted if businesses remain as cautious as they were in the second quarter. The 2018 tax cuts sparked some investment in 2018 – but since then the business environment has changed. Managers are asking: “When will the US business cycle peak?” “When will the global economies begin to prosper?” “Will the new trade policies be favorable?” Weak global economies have reduced the demand for US goods, while a strong dollar and tariffs have decreased the quantity demanded for exports by increasing the price of US goods sold overseas. (China has recently let the value of the yuan drop.) A stronger US dollar raises the price of US goods higher relative to prices denominated in other currencies. Finally, most countries have retaliated when the US imposed a tariff on items manufactured in another country by charging a tariff on US goods. This raises the price of US goods sold in those countries. These considerations and more have contributed to less capital investment during the second quarter.

Much of the US economy’s growth has been financed. Government spending increased 5.0% in the second quarter. The US Treasury reported that the budget deficit increased 23% between October and June, prompting the Treasury to warn that the government will run out of money in September unless the debt ceiling is raised. But can the nation afford to continue adding to its debt? The Federal Reserve reported that the national debt is over 104% of the nation’s GDP. This is up from 83% at the end of the recession.