The US economy is booming, and it is unlikely to slow down soon unless Omicron gets in its way. American consumers continue to spend as more return to work. Businesses are investing too. Companies have increased wages to attract and retain workers. Despite the higher labor costs, companies are earning higher profits because they can raise their prices. But the economy is in a tenuous position. Four million fewer people are working than before the pandemic. Inflation has reached a point not seen in 40 years. Policymakers at the Federal Reserve are meeting this week. What will they do? The status quo may increase inflation, but the economy and job creation may slow down if they raise interest rates to curb inflation. Read our predictions and recommendations in the summary section. But first, it is important to understand the current state of the US economy. It should be noted that the data used in the cited reports were collected before the emergence of Omicron.

The Bureau of Economic Analysis adjusted its second estimate of the US economy’s third-quarter growth upward from 2.0% to 2.1%. Consumer spending, which makes up 70% of the economy, was higher than initially reported. A shortage of labor pushed wages higher, which helped increase household incomes. Profits continue to rise, but at a slower pace than in the second quarter because a surge of Delta cases restrained growth. But profits grew 21% over the prior year, partially because companies raised their prices. Businesses face escalating costs, such as labor, parts, and shipping. They are trying to recover some of their added expenses by increasing their prices. Inflation was down slightly from the second quarter, but the rate of price increases remains significantly higher than the Federal Reserve’s target of 2%. Readers can access the full report at Gross Domestic Product, Second Estimate Third Quarter 2021. The BEA will release its third estimate of RGDP on December 22nd.

Household income rose in October after falling in September. Higher wages and people returning to work contributed to October’s growth, while September’s decrease was primarily attributable to expiring government assistance programs rather than a fall in wages and salaries. Apart from August 2021, wages have increased more than 0.7% every month since March 2021. Prices continue to climb at a rate not seen in three decades. Spending increased in all the sectors with purchases of durable goods such as cars gaining the most. Read the full report Personal Income and Outlays – October 2021. The highlights are listed below. 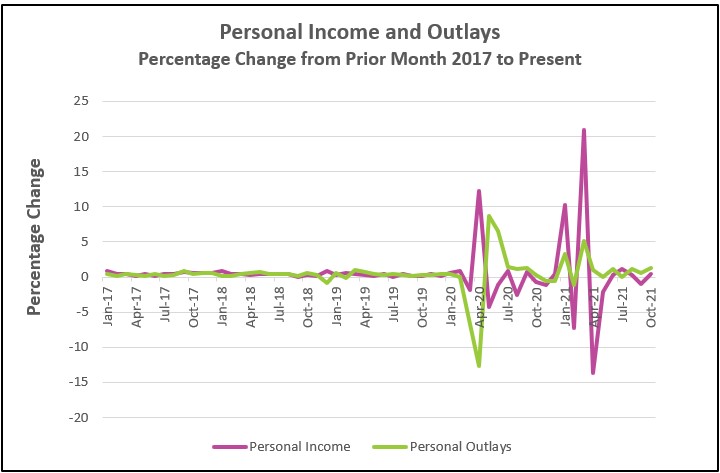 Another measure of inflation, the CPI, rose the most since 1982. November’s rate was down slightly from October, but not enough to lower the index over the prior year. Large price increases in energy, food, and shelter challenged many lower-income families to meet their budget. The core index, which excludes volatile energy and food prices, also rose, but less than the overall rate. The core rate has exceeded the Federal Reserve’s 2% target every month since April, adding pressure on the Fed to begin tightening its monetary policy when it meets this week. Students can access The Bureau of Labor Statistics’ full report at Consumer Price Index – November 2021. The report’s highlights are summarized below. 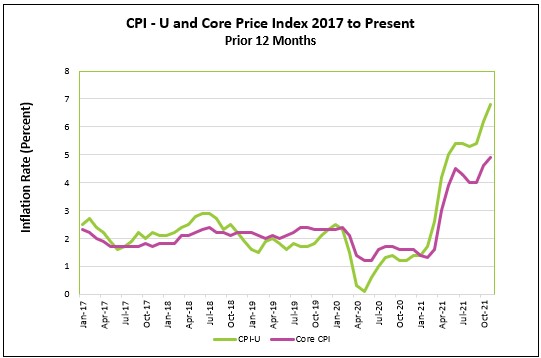 The employment situation improved in November. Unemployment fell. But the Bureau of Labor Statistics report, which is based on two surveys, provided confusing figures. The employer survey revealed that payrolls increased a disappointing 210,000, well below the monthly average of 555,000 in 2021. However, 1.14 million more people reported they were working according to the survey of households. It is not uncommon for these figures to differ, but it is unusual for the difference to be so great. The summary section includes an explanation of the discrepancy.

Meanwhile, the aggregate supply decreased. Many businesses closed temporarily, or in many cases, permanently. When they reopened, they had trouble rehiring as many workers because many were hesitant to return to work. Inventory and parts became more difficult to secure. Distribution bottlenecks became common. The graphs below illustrate how the changes in the US economy’s aggregate demand and aggregate supply resulted in the same output but a higher price level. 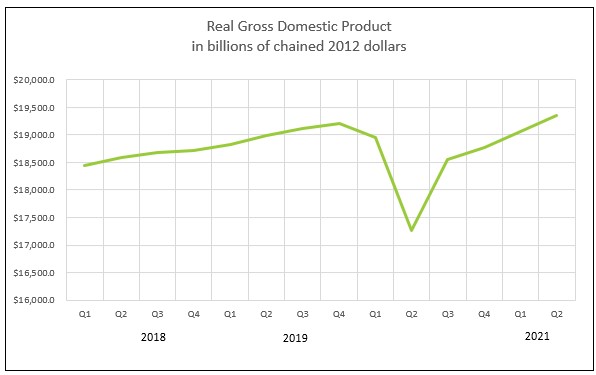 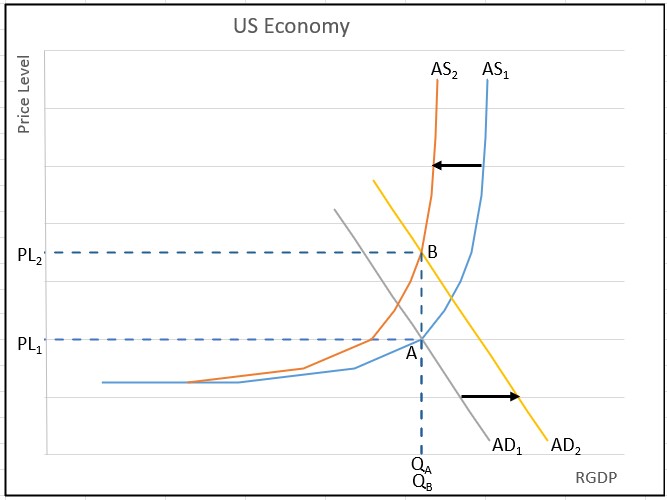 In the graph above, the pre-pandemic economy had output QA and a price level of PL1. The aggressive fiscal and monetary policies pushed the aggregate demand curve to AD2. The supply challenges reduced the aggregate supply from AS1 to AS2. The result, a higher price level, PL2, with the same output.

Inflation harms people when their income does not keep pace with rising prices. Over the prior 12 months, wages increased 4.8% while the price index rose 6.6%. In other words, in most cases, a pay raise has been insufficient to cover the added cost of goods and services. Hardship is exacerbated because price increases of essentials such as food and energy exceeded the monthly average. Fed officials are concerned that an extended period of inflation will create a self-fulfilling prophecy by creating a cycle where workers demand higher wages because they anticipate higher prices, and companies raise their prices to cover the added expense, thereby pushing inflation higher and higher. According to the University of Michigan’s consumer sentiment index, consumers are more concerned about inflation unemployment.

The Omicron variant will impact the economy. People may decide to venture out less. In which case, it will decrease the aggregate demand and lessen inflationary pressures. For example, gasoline prices fell in early December because of the lower demand. However, Omicron may delay people’s return to the workforce, or worse – factories may close temporarily. These actions reduce the aggregate supply and add inflationary pressures.

Fiscal and monetary policies need to focus on increasing the aggregate supply. Chairman Jerome Powell and other Federal Reserve officials maintain that many supply constraints will work themselves out when people return to work and supply chain problems lessen. There are many positive signs. The number of people who reported they were working increased by 1.1 million in November. Higher wages, vaccinations, and fewer government transfer payments enticed 594,000 people to join the workforce. Most found work quickly, which lowered the unemployment rate by 0.4%. (If workers had not found work quickly, the unemployment rate would have increased.)

The Bureau of Labor Statistics uses two surveys when compiling data for its monthly Employment Situation reports. The unemployment rate and the number of unemployed are calculated using a household survey. The household survey concluded that the unemployment rate fell 0.4%, and 1.14 million more people reported they were employed. Payroll figures are determined using a survey of employers. It deduced payrolls increased a disappointing 210,000. The difference between the surveys is the most since October 2020. Why the difference? The two surveys use a slightly different definition of employment. (The household includes workers on unpaid, while the employment survey does not.) Inaccurate seasonal adjustments may have contributed to the discrepancy. Payrolls increased by 778,000 people before the seasonal adjustment. Over the long term, the surveys are consistent. Economists generally favor the employment survey because it has a larger sample size. For the past six months, the household survey has been weaker than the payroll survey, so November’s high figure may be explained by the household report catching up with the employer survey.

Payrolls were 3.9 million less in November than in February 2020. The table below identifies the pandemic’s impact on employment in different sectors. 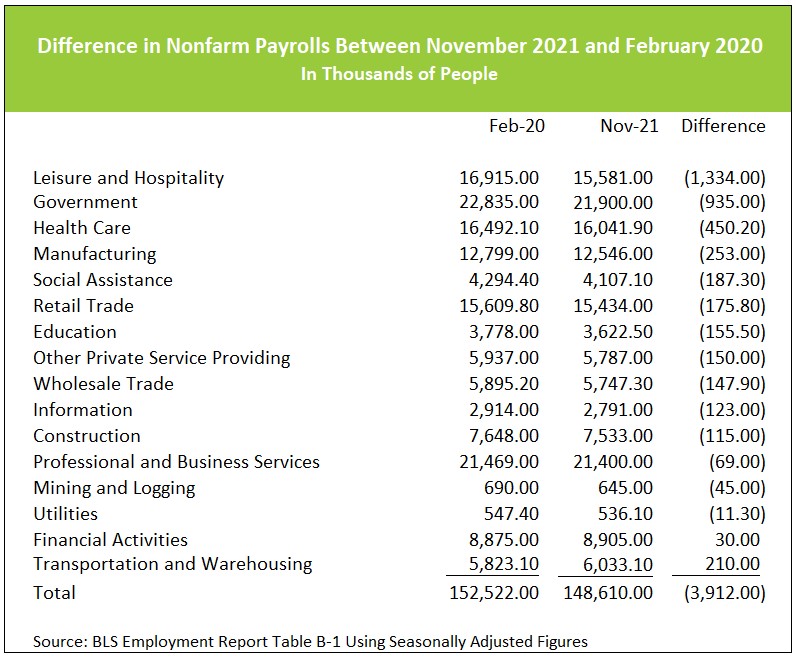 The loss of jobs in the leisure and hospitality sector accounts for more than one-third of the total. Only transportation/warehousing and financial activities have benefited from the pandemic.

The reports used in this blog collected data before the emergence of Omicron. The virus’s impact will depend on how easily it spreads, the severity of illness, the effectiveness of the vaccines, and how the public responds. Like the Delta variant, Omicron will likely delay the recovery. Leisure and hospitality would probably be hurt the most if people stayed home. People who had been ready to return to work may postpone returning. Businesses may cut back or close temporarily.

What should be done? Most households are in a healthy financial position. Their incomes have increased, and they have abundant savings. They will continue to spend. Additional fiscal spending that targets aggregate demand would be harmful and should be curtailed. Instead, fiscal policies should focus on boosting the aggregate supply. Initiatives to get people to return to work are needed. President Biden plans to release 50 million barrels of crude from the petroleum reserve to increase oil supply and cut prices. Policymakers at the Federal Reserve have a real challenge. Curbing inflation may jeopardize job creation because the primary tool to reduce inflation is increasing interest rates. Higher rates reduce the economy’s aggregate demand. Yet, increasing rates also make it less attractive for businesses to expand. Until recently, the Fed has prioritized stimulating the economy over curbing inflationary pressures because policymakers believe the recent surge in inflation is temporary. However, concern that inflation is getting out of hand is growing. Before the Omicron variant, I expected the federal reserve to move up its timetable on increasing rates. But the uncertainty surrounding the impact of Omicron may delay any tightening.

Next month we will review 2021 by revisiting our 2021 predictions and provide a forecast for 2022. We hope you have a Merry Christmas and a joyful holiday season.