State of The Economy - September 2019

The United States’ economy continues to show signs of reaching its peak. Next week the Federal Reserve’s Federal Open Market Committee (FOMC) will consider reducing its target federal funds rate for the third straight meeting to prolong the current record-breaking expansion. It’s remarkable the economy has shown the resilience it has, given the anemic growth of the global economy. Germany and the United Kingdom have experienced a slowdown in their respective economies, leading to possible recessions. The trade war with China has hurt America’s industrial sector. Even with these concerns, the American household has continued to propel the economy forward. Job security fostered by the lowest unemployment rate in 50 years, and higher incomes have encouraged consumers to spend. But there have been signs that consumer spending will not be as robust soon. Consumer sentiment weakened. Retail sales fell between August and September. Wages in September barely kept pace with inflation. Below we review four publications that we believe best summarize macroeconomic trends in the US economy. We invite you to participate in our Twitter (@HigherRockEd) poll, which can be found at the end of this blog. What do you believe the FOMC should do when it meets at the end of October?

The US economy grew at a rate of 2.0% in the second quarter, according to the Bureau of Economic Analysis (BEA) third revised estimate. The highlights are summarized below. Readers can access the report at the Gross Domestic Product, Second Quarter 2019, Third Estimate.

August’s consumer spending grew at its slowest pace since it decreased 0.2% in February. Furthermore, some economists believe there is a trend since spending has been lower every month since March. This is concerning because household spending has been the primary force of continued growth. Consumer spending or personal consumption expenditures (PCE), accounts for approximately 66% of economic activity in the United States. (Read our lesson Gross Domestic Product – Measuring an Economy’s Performance to learn more about the importance of PCE.) The Commerce Department released its report Personal Income and Outlays, August 2019 on September 27th. The highlights are listed below. 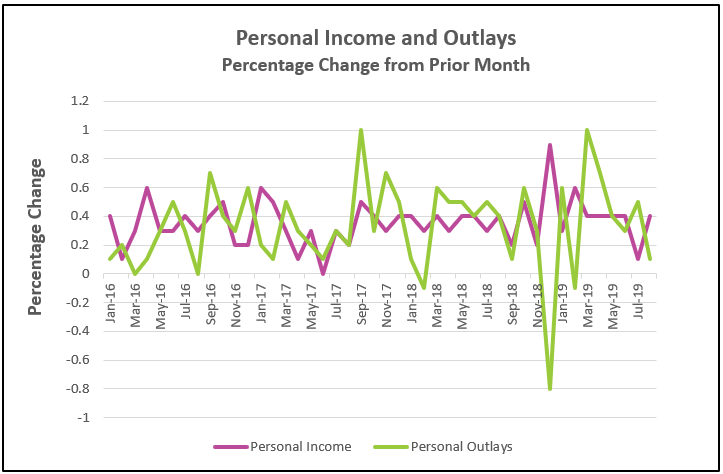 Energy prices continue to restrain inflation, according to the Bureau of Labor Statistics (BLS) September report. The consumer price index remained below 2.0%, while the core price index exceeded 2.0% for the fourth consecutive month. The CPI and core price index are not favored by the FOMC, but they are most commonly quoted in the press. Both measures tend to move in the same direction. Read the full report by visiting Consumer Price Index – September 2019. Here are the highlights of the BLS’s report. 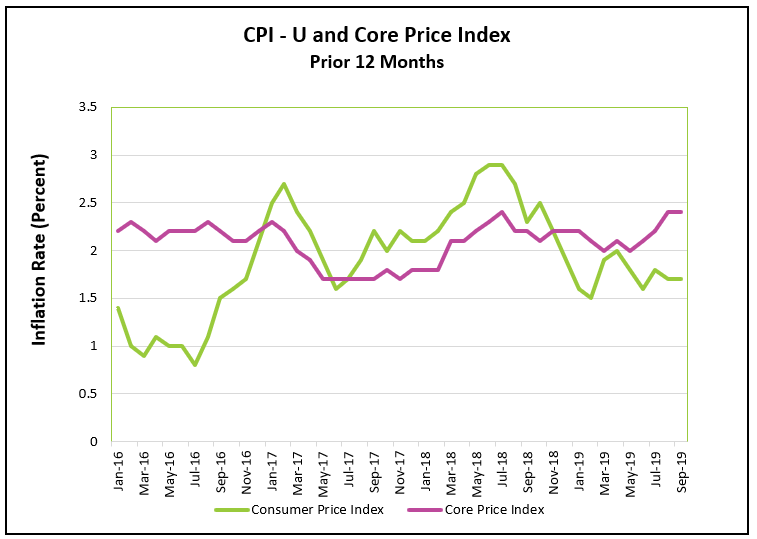 Employment conditions in the United States remain healthy – and may be improving. Both the standard and expanded unemployment rates dropped to historically low levels. Readers can access the BLS report by going to The Employment Situation – September 2019. The report’s highlights are listed below. 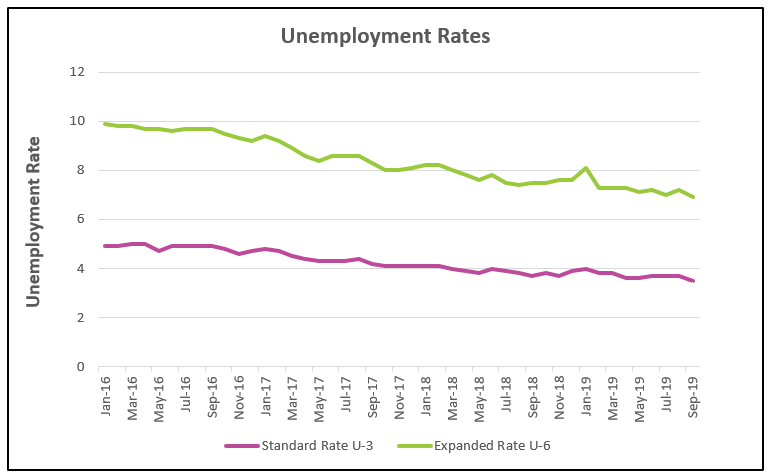 Consumer spending is the primary driver of the US economy because it accounts for approximately 66% of economic spending. In recent months it has shown remarkable resilience to a plethora of discouraging news including political uncertainties, slowing global economies and a trade war. Rising wages, low inflation, and historically low unemployment rates have provided households with the income and confidence to spend it. However, the fall in August’s consumer spending is noteworthy because  incomes rose. Is the increase in savings a sign consumers are wary of the future? Consumer confidence fell in September, according to the Consumer Confidence Index. On October 16th, the US Census Bureau reported that retail sales decreased 0.3% between August and the end of September. This follows an increase of 0.6% the prior month. Is this a sign that consumer spending is slowing? If the trend continues it could be an indication the US economy is losing its momentum and is nearing the peak of its longest recorded expansion. Healthy growth in consumer spending has been vital in maintaining an economic growth exceeding 2.0%. A long-lasting deterioration of household spending would jeopardize continued expansion.

Businesses are hesitant to invest – given the political uncertainty, trade-wars, and a struggling global economy. Business investment declined 1.0% in the second quarter according to the third estimate of second quarter growth provided by the Commerce Department. (This was revised from 0.6% in the second estimate.) Tariffs on imported goods provide domestic manufacturers a cost advantage over foreign competition, but that advantage is lessened or negated when the domestic company imports raw materials and intermediate goods from foreign suppliers or when foreign governments retaliate with a tariff on the goods they export. The International Monetary Fund recently concluded, “that the US-China trade tensions will cumulatively reduce the level of global GDP by 0.8 percent by 2020.” (The World Economy: Sycronized Slowdown, Precarious Outlook.)

Energy prices continue to fall. Many economists believe lower energy prices have resulted in analysts overreacting to the recent decrease in consumer spending. Consumer spending is measured in dollars, not units sold. A reduction in price of gasoline would cause a decrease in consumer spending relative to the volume of gasoline purchased. Lower gasoline prices also paint a rosier picture related to prices by restraining the consumer price index, which has increased 1.7% in the prior 12 months. However, the core index, which does not include volatile changes in energy and food prices increased 2.4% - the highest it has been in the past year.

Labor conditions continue to improve. The Bureau of Labor Statistics reported that the unemployment rate dipped to 3.5%, its lowest level in 50 years. The U-6, which includes people marginally attached to the labor force fell to 6.9%. Workers without a high school degree are finding jobs. This group’s unemployment rate dipped to 4.8%, a drop of 0.6% since last month. The average hourly earnings for all employees was little changed, down $0.1 to $28.09. Wages have increased 2.9%, which exceeds inflation, over the prior 12 months. The average workweek remained unchanged at 34.4 hours. Earlier in September the Commerce Department reported that wages increased 0.6% in August. I look forward to learning if Commerce Department’s September report (which will be released October 31st) reflects as large a drop in wages as the BLS report. However, I do not find September’s small increase in wages alarming because the unemployment rate fell. I attribute the small increase to the large number of high school dropouts entering the labor market at a lower wage.

Even the service sector slowed in September. Economists believe the service sector is less susceptible to the trade war. This has helped insulate the US economy since over 80% of workers are employed in service industries and the service sector and government combine for over 80% of the US GDP. (See last month’s State of the Economy.) But in September the non-manufacturing index published by the Institute of Supply Management fell to 52.5 from 56.4. The index measures changes in production levels from month to month. Purchasing managers in 13 non-manufacturing industries are surveyed. An index exceeding 50 is indicative of growth, but a drop in the index points to a slower growth rate. September’s reading is the lowest since August 2016.

The FOMC is concerned the economy is nearing its peak. It has decreased its target for the federal funds rate at its last two meetings intending to prolong the expansion. Will the Fed cut again when it meets next week? Many economists believe it should. Weakness in the manufacturing sector and a slowing global economy endanger continued growth. Cutting rates for a third time should help support a weakening economy. Central banks around the world have been cutting rates. The New York Times reported on August 15th that over 30 central banks have reduced their interest rates. (Visit As Recession Concerns Mount, Dozens of Central Banks are Cutting Rates to see a terrific graph.) Other economists believe the rate has been cut enough and it should be left alone or even increased. Many in this group believe an interest rate cut is unnecessary because the economy is healthy, given the low unemployment rate and continued economic growth. It is premature to cut rates so soon and additional cuts may impede their ability to act in the future. What do you think the FOMC should do? Vote in our Twitter (@HigherRockEd) poll.