The US economy continues to rebound from the 2020 recession, but there are some growing pains. Economic growth accelerated in the first quarter, and prosperity is likely to continue into the second. Household income has increased, primarily because massive transfer payments from the federal government fueled consumer spending. Households have also saved at record levels, which should provide funds to maintain consumer spending. However, the employment numbers were disappointing. Businesses have openings, but many people have chosen not to return to the workforce. Prices continue to increase. A rising aggregate demand and supply chain problems are the primary contributors. To learn more about the US economy’s progress and where it is heading, read our summary of vital statistics and analysis.

The US economy gained momentum from the fourth quarter of 2020. Fueled by government transfer payments, the economy has returned to close to its pre-pandemic level. Consumer spending was the primary beneficiary. However, Payment Protection loans continue to help businesses. Prices increased more than the Federal Reserve’s target of 2% because of a released pent-up demand and supply chain issues. To access the full report, visit Gross Domestic Product, Advance Estimate First Quarter 2021. The Bureau of Economic Analysis will refine its advance estimate and release its second estimate for the first quarter on May 27.

The first quarter ended with significant gains in household income and consumer spending. As in April 2020 and January 2021, massive transfer payments propelled household incomes higher, which in turn spurred consumer spending. Wages and salaries were little changed, so the increase in March’s income was almost entirely from the government stimulus checks. However, households saved a large portion of their income gains, which economists believe will provide assurance that the recovery will continue after the government transfer payments subside. Read the full report Personal Income and Outlays – March 2021. The highlights are listed below. 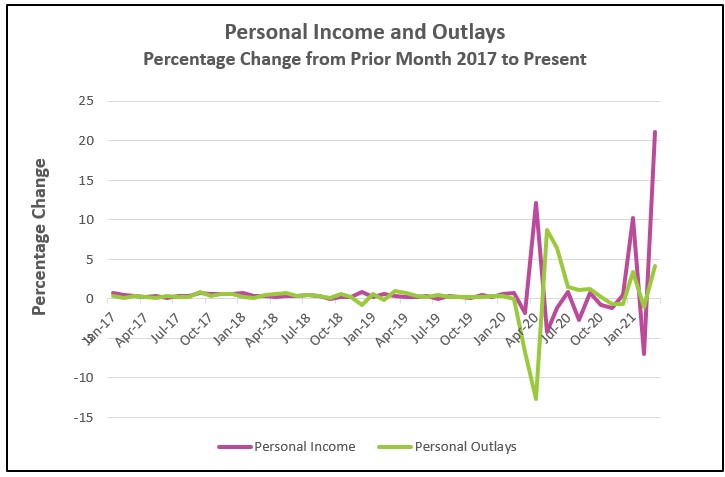 Prices increased at the highest rate since the period ending September 2008, raising fears that inflation may threaten the recovery. Government officials insist that the pressure is short-term. Industries that lowered their prices during the containment measures were able to raise their prices. A 10% increase in used car prices accounted for over one-third of the CPI-U increase. The increase was restrained by a modest 1.4% drop in gasoline prices following a 9.1% increase in March. Read the complete report Consumer Price Index – April 2021. Here are the highlights of the report. 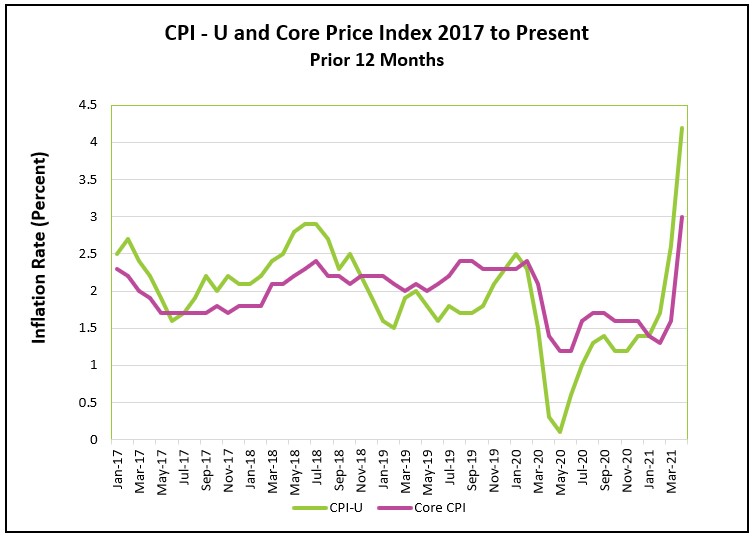 The unemployment rate increased for the first time since April 2020. Far fewer people were added to payrolls than economists predicted. Fortunately, the service sector, which the pandemic has severely hurt, showed the greatest gains. Many businesses are having trouble hiring. Chip shortages continued to slow auto manufacturing. Businesses grew more confident in the future and chose to hire permanently rather than temporarily, thus reducing the number of temporary workers. The highlights from The Employment Situation – April 2021 are listed below.

COVID-19 cases continue to decrease, clearing the way for a resurgence in the US economy. 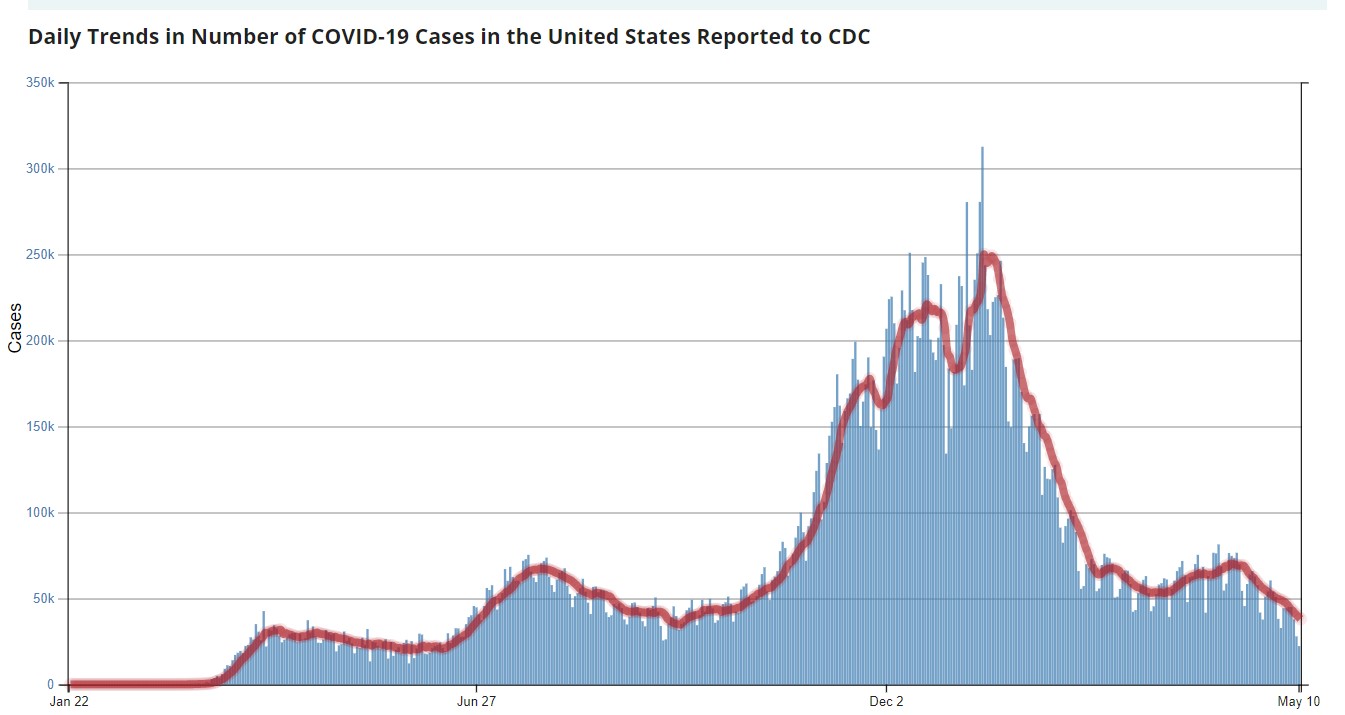 The economy is gaining momentum. Vaccinations, nicer weather, and cabin fever have contributed to people venturing out more, whether it is traveling, dining out, or visiting friends and family. People are spending more. Consumer spending increased in March, but not as much as household income, which increased over 21% thanks to the most recent round of stimulus payments. Income growth will slow because it is unlikely Congress will pass another round of stimulus checks. Furthermore, as employment increases, supplemental unemployment insurance will decrease. Households have saved much of the added income, which should supplement future spending. Real gross domestic product is approaching its pre-pandemic level. 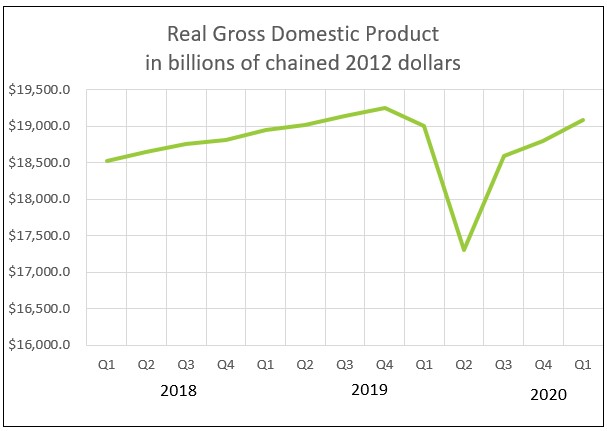 However, the government can’t just turn on a switch and expect the economy to recover without a hitch. There will be growing pains. Unemployment will persist, and inflation will increase.

Employment must increase to sustain the recovery. April’s payroll growth was discouraging. The unemployment rate increased, and fewer people were added to payrolls than most economists predicted, even though many businesses are hiring and having trouble attracting workers. The Bureau of Labor Statistics reported that there are more job openings now than before the pandemic. Why haven’t more jobs been filled? Lael Brainard, one of the governors serving on the FOMC, provided several explanations in a speech she gave on May 11, Patience and Progress As The Economy Reopens and Recovers. When the employment survey was taken, two-thirds of students had not returned to in-person schooling. Less than 25% of adults between 18 and 64 had been vaccinated. Many unemployed were concerned about becoming sick. Others, particularly low-skilled workers, were deterred because they lack the necessary skills or credentials for available jobs.

However, many economists believe many workers remain on the sideline because their unemployment compensation exceeds their wages. The breakeven income is approximately $32,000 a year. For those who earn less than that, there is little incentive to return to work, especially if they are confident that they will find a job when the supplemental unemployment insurance ends September 6.

Leisure and hospitality had the largest gain in employment, but employment in the sector remains 16.8% below February’s level. Many of those who lost their jobs were the lowest paid workers. Restaurants are among the businesses that are having trouble finding workers. Many took advantage of the layoff and found other jobs. Perhaps they used the transfer payments to pay for training.

The combination of fiscal and monetary policy should keep the economic train rolling. Some economists fear it is recovering too fast and will overheat – which would trigger too much inflation. The stimulus checks and aid to businesses have limited the economic damage of the pandemic by providing money to households to continue to spend and assisting employers in retaining their employees. President Biden recently proposed an additional $4.1 trillion for programs to build the infrastructure ($2.8 trillion) and help families ($1.8 trillion). The Federal Reserve has been clear that they will continue accommodative monetary policies until the economy improves and employment returns to pre-pandemic levels. That means not increasing interest rates. Together the accommodative fiscal and monetary policies should continue increasing the aggregate demand, which is causing demand-pull inflation.

Inflation pressure is also mounting on the supply side. For example, employment in the automotive industry fell 27,000, mainly because of the bottleneck created by a shortage of semiconductors, pushing up the price of used cars. COVID-induced production cutbacks created supply chain problems. Some production was reduced for safety reasons. In other cases, business owners did not want to increase their inventories following a reduction in the demand for their goods. Now the unanticipated increase in demand caught them flat-footed. They find themselves without the capacity to ramp up production, particularly when there are delays in obtaining the raw materials and labor they need.  Wages have recently increased at an annual rate of 8.4%. The Federal Reserve insists that the supply chain pressures are short-term, and the recent increase in prices will subside.

The inflation rate is rising, but the numbers may be misleading. They appear higher because of the base effect. The large drop in prices between March and May 2020 lowered the base, so a percentage increase appears larger than when compared to February 2020 levels. Prices are 3.1% higher if measured from February 2020 before the pandemic began. However, because prices fell between March and May 2020, the 4.2% increase over the prior 12 months exceeds the 3.1% increase since the pandemic began sixteen months ago. The base effect will only impact the numbers for a few months.

However, inflation will become a long-term problem if suppliers cannot keep up with the demand. In other words, prices will rise if the growing aggregate demand funded by the additional government spending and low interest rates exceeds the ability of businesses to hire workers and increase production.