State of the US Economy - September 2020

Normally a 661,000 increase in payrolls would be celebrated – but not in September. For the first time since the recent economic recovery began fewer than one million jobs have been added. It is likely an indication that the recovery is slowing. Other signs of a slowdown include: household income is less, consumer spending is lower, and most importantly COVID-19 cases continue to climb. More businesses are failing, adding to the number of people who have permanently lost their job. Many economists, including Federal Reserve Chairman Jerome Powell, believe additional fiscal stimulus is needed to continue the momentum from the recovery in the third quarter. Other policy makers argue that no additional stimulus is needed. Deficits are out of control, and the government needs to resist large spending increases. What should be done? These options are discussed in the Summary and Analysis section below.

The Bureau of Economic Analysis (BEA) issued its third and final estimate of real gross domestic product (RGDP) in the second quarter. There were a few minor adjustments. A summary the contribution to RGDP by industries was included in the report. All categories that are included in RGDP fell. Private goods faring the worst, while government decreased the least. The revised results are summarized below. Readers can access the full report at the Gross Domestic Product, Second Quarter 2020, Third Estimate.

Household income fell in August even though many people were returning to work, largely caused by the drop in unemployment benefits stemming from the expiration of the $600 weekly federal supplement on July 31. It is interesting to note that August’s income was 2% higher than February’s income, the month before containment measures were implemented. Consumer spending has been supported by federal transfer payments, businesses reopening, and people returning to work. Read the full report by following the link Personal Income and Outlays – August 2020. The highlights are listed below.

Prices continued to move higher in September. Used cars have seen the greatest increase. Demand has increased, propelled by consumer concern of using mass transit or ride-sharing services. Read the full report by visiting Consumer Price Index – September 2020. Here are the highlights of the report. 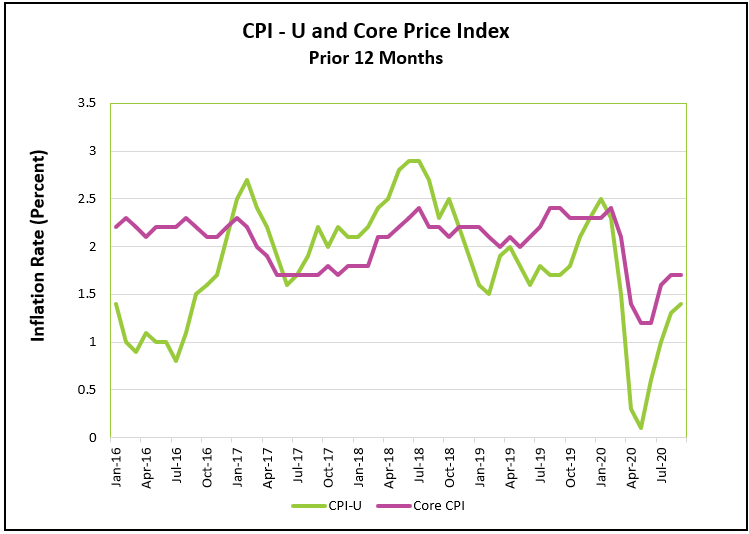 The jobless rate has continued to improve since it peaked at 14.7% in April – but it remains much higher than February's historically low rate of 3.5%. Fewer people were added to payrolls than in the past three months. Unfortunately, one reason for the lower unemployment rate is many people have given up seeking employment because they are discouraged, fear getting sick, or have child-care responsibilities. (To be considered unemployed a person must be actively looking for a job.) Another alarming trend is the number of permanently unemployed people continues to increase at a growing rate, which is indicative of businesses shutting down. The highlights from The Employment Situation – September 2020. are listed below. 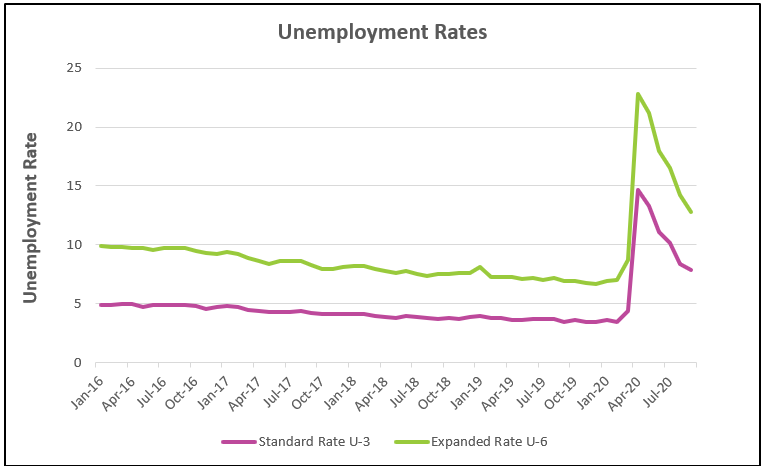 The economy began its recovery in the third quarter – but it was largely propelled by government payments to households. Consumer spending drives the US economy, contributing over 66% to the US GDP. In the second quarter the US economy sank into a deep recession. Personal consumption expenditures fell dramatically following the record job losses in March and April when containment measures forced many businesses to close. Fearing the economic repercussions, Congress responded quickly by authorizing supplemental income and unemployment insurance. Many believe Congress was too generous because many recipients benefited from a higher income than when they had a job. They spent and saved. Consumer spending has increased every month since May, but it remains less than in February. More alarming is the slowing pace of the increase. Personal consumption expenditures rose 8.7% in May, but only 1% in August.

Personal income has dropped following July’s expiration of many government programs that supplemented household income. Personal income fell 2.7% in August. Consumer spending will eventually decrease if household income continues to fall and savings are depleted – which if severe, would propel the economy back into a recession.

Adding jobs is the only sustainable way to increase household income and maintain consumer spending - but job gains depend on an increase in consumer spending! Businesses will not increase hiring unless they expect the demand for their good or service will increase. Layoffs continue to be historically high. Last week, 898,000 people filed for unemployment. The Department of Labor’s graph illustrates that while claims have dropped from their historic high in March, they remain stubbornly near one million people each week. This compares to an average of 200,000 prior to the pandemic.

There were some positive signs in this month’s employment report. Private payrolls increased by 877,000 people with manufacturing adding 66,000 workers. However, government employment fell 216,000. Much of the drop was attributed to many schools not reopening with in-school learning.

In the long run both jobs and consumer spending depend on containing the coronavirus. Unfortunately, the mounting cases jeopardize the recovery.

The increase in COVID-19 cases has discouraged people from venturing into the marketplace, not only as buyers, but also as workers. The unemployment rate fell in September, but for the wrong reasons. To be considered unemployed, a person must be seeking employment. Many of the long-term unemployed are discouraged. Others have been deterred from reentering the workforce because they fear catching the disease or because they must care for a child when daycare or in-school education is unavailable. The net gain in employed was only 275,000.

COVID-19 continues to force businesses to shut down. Large layoffs are expected to continue. Walt Disney Co. announced it was laying off 28,000 workers and American Airlines Group Inc. and United Airlines Holding Inc. threatened to let go an additional 32,000 workers if they do not receive additional aid from the federal government in the beginning of October. The National Restaurant Association reported that 100,000 restaurants have closed temporarily or permanently. More will close in the winter as outdoor seating becomes a less viable option. Dr. Anthony Fauci, the director of the National Institute of Allergies and Infectious Diseases, warns of a surge in cases during the colder months because people remain indoors where airflow is constrained.

The Federal Reserve has done its job by maintaining near zero percent interest rates and assuring that banks have the funds to lend. But most economists believe an accommodative monetary policy is not enough. Additional fiscal stimuli are needed. The recovery is threatened if Congress fails to pass another stimulus package. Federal Reserve Chairman, Jerome Powell has repeatedly encouraged Congress to act now. President Donald Trump concurs. Congress acted quickly when it passed the CARES Act soon after containment measures all but shut down the economy. Economists agree that the economy would have deteriorated much more without the $3 trillion investment by the federal government. Consumer spending and  employment increased after households received the one-time stimulus checks, a weekly $600 unemployment insurance supplement, and other measures. Congress agrees that continued help is needed, but they disagree on how much, so none has been appropriated. In general, Republican leaders urge restraint because of the growing budget deficit.

There is no doubt growth of the deficit is unsustainable at today’s rate. The deficit has increased from $1 trillion to more than $3 trillion in the past 11 months. Growing deficits are normal when an economy slows because government spending increases while tax revenues subside. Fortunately, low interest rates make borrowing more attractive for the federal government, so many economists believe there is still room for borrowing. However, this view is short-sighted. Eventually, the debt will mature. How does the government repay its debt? By refinancing it and issuing more debt. If rates are higher when refinanced, then the deficit will balloon further out of control. However, Chairman Powell is correct when he said in an interview on NPR that now is not the time to confront this problem. Deficit spending is appropriate during periods when fiscal stimulus is needed to lift the economy. Greater budget discipline is needed when we emerge from the recession.

On October 29th, the BEA will release its advance estimate for RGDP in the third quarter. Most economists believe the economy grew at a 30% annual rate because the economy reopened following the shutdown in the second quarter. Today’s concern is whether or not a failure to contain COVID-19 has thrown us back into a recession. We must do our part to improve the economy by helping curb COVID by wearing a mask and responsibly practicing social distancing. By working together, the economy will fare better and continue its improvement, but behaving irresponsibly will force our leaders to curb economic activity, which will slow the economy, and delay the recovery.