My family recently visited one of our favorite restaurants. Our experience provides a good illustration of the state of the US economy. We decided to splurge and go to a nicer (i.e., more expensive) restaurant than usual. After all, we have our stimulus money to spend. We were not alone. It became immediately apparent that business was booming. The restaurant was crowded, and we had a long wait. Few people wore masks. Once we were seated, the service was poor. We only recognized one of the servers. I chatted briefly with the manager, and she told me her greatest challenge was finding reliable workers. In fact, they planned to close Memorial Day because they did not have sufficient help. When I got the bill, I was stunned. Surely, they had charged us for an extra meal! They had not. Management had recently increased its prices.

Like the restaurant, the US economy is booming. Service industries, such as restaurants, have benefitted the most from the rebound. But businesses have had trouble hiring. Many of their former employees have found new jobs or remain reluctant to return to work. Companies are offering incentives to attract new employees. They also must train them. Cost increases and a pent-up demand have pushed prices higher. Will the boom continue? Will it result in prolonged inflation? To learn more about the US economy’s progress and where it is heading, read our summary of vital statistics and analysis.

The Bureau of Economic Analysis (BEA) did not change its estimate of RGDP in 2021's first quarter from its advance estimate. However, it raised its initial estimate of consumer spending, but a drop in exports balanced the increase. Overall, the US economy gained momentum from the fourth quarter of 2020. Government transfer payments fueled the expansion and returned RGDP to close to its pre-pandemic level. Consumer spending was the primary driver. However, Payment Protection loans continued to help businesses. Corporate profits fell, but much less than in the preceding quarter. The drop is primarily because of struggling companies in service industries. Profits are expected to improve as the service sector recovers from the pandemic. To access the full report, visit Gross Domestic Product, Second Estimate First Quarter 2021. The BEA will release its third estimate for the first quarter of 2021 on June 24.

Price increases are the most prominent statistic in this report. The monthly core personal consumption expenditures price index increased to levels it has not reached in nearly two decades. It exceeds the Federal Reserve’s target of 2%, but the Fed officials believe the increase is temporary. In other news, as expected, personal income fell sharply because stimulus checks and other government transfers pushed March’s figures up sharply. On the other hand, it is encouraging that wages and salaries continued their rise. Spending increased but fell to a more normal pace following the record increase in March. More detailed discussions concerning the recent price increases are included below in the Consumer Price Index and the Summary and Analysis sections. Read the full report Personal Income and Outlays – April 2021. The highlights are listed below. 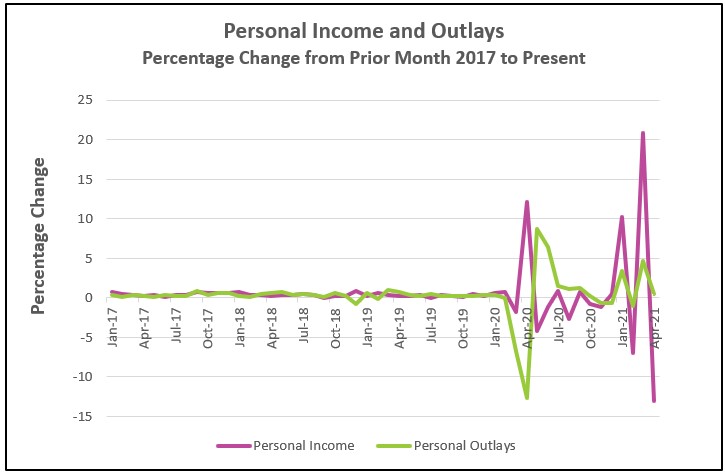 The inflation rate continued to increase, with the 12-month reading of CPI-U jumping to its highest level since August 2008. The core price index has not been this high since June 1992. Government officials insist that the inflationary pressure is short-term. The largest increases were in industries that lowered their prices during the containment measures. Prices in the service industries have continued their recovery from early in the pandemic. Read the complete report Consumer Price Index – May 2021. Here are the highlights of the report. 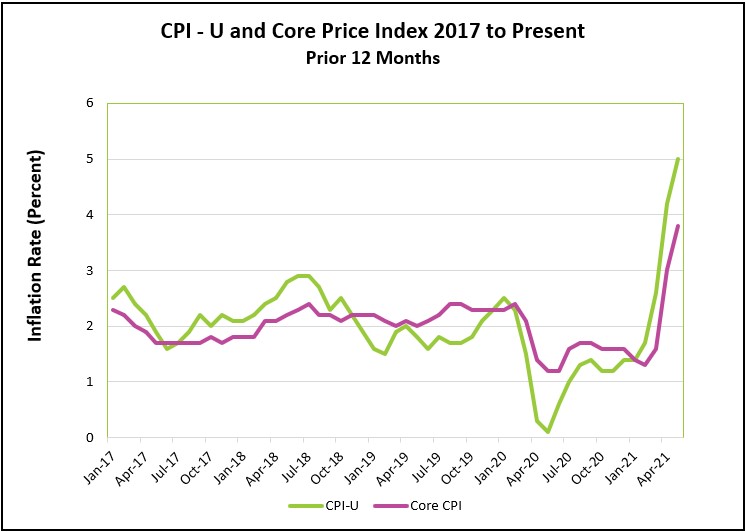 The unemployment rate fell in May to 5.8%, after increasing slightly in April. Payrolls increased by 559.000, less than most economists expected. A Bloomberg survey had predicted an increase of 675,000. The service sector, led by the leisure and hospitality industries, continued to benefit the most from fewer COVID cases, more people being vaccinated, easing restrictions, and a public yearning to venture out more. But, many businesses are having trouble hiring. Many managers point to continued unemployment supplements, but most economists and evidence believe the supplements are a small part of the problem. The summary section includes an analysis of the reasons and implications for people's reluctance to return to the workforce. The highlights from The Employment Situation – May 2021 are listed below.

The US economy continues to rebound from the 2020 recession, but some growing pains persist. Economic growth accelerated in the first quarter, and prosperity is continuing into the second. At the beginning of the second quarter, household income increased at a record clip, primarily because massive transfer payments from the federal government fueled consumer spending. Since then, income has fallen because of the drop in government transfer payments, but it remains 11% higher than in February 2020. Sustainable growth requires increases in profits rather than federal spending. Profits support higher wages. Profits fell in the second quarter, but much less than in the first quarter and most economists expect profits to increase in the third quarter. Households have also saved at record levels, which should provide funds to maintain consumer spending. There was a healthy shift in spending in April from spending on durables to services, which indicates that people are spending less time at home and venturing into the community. 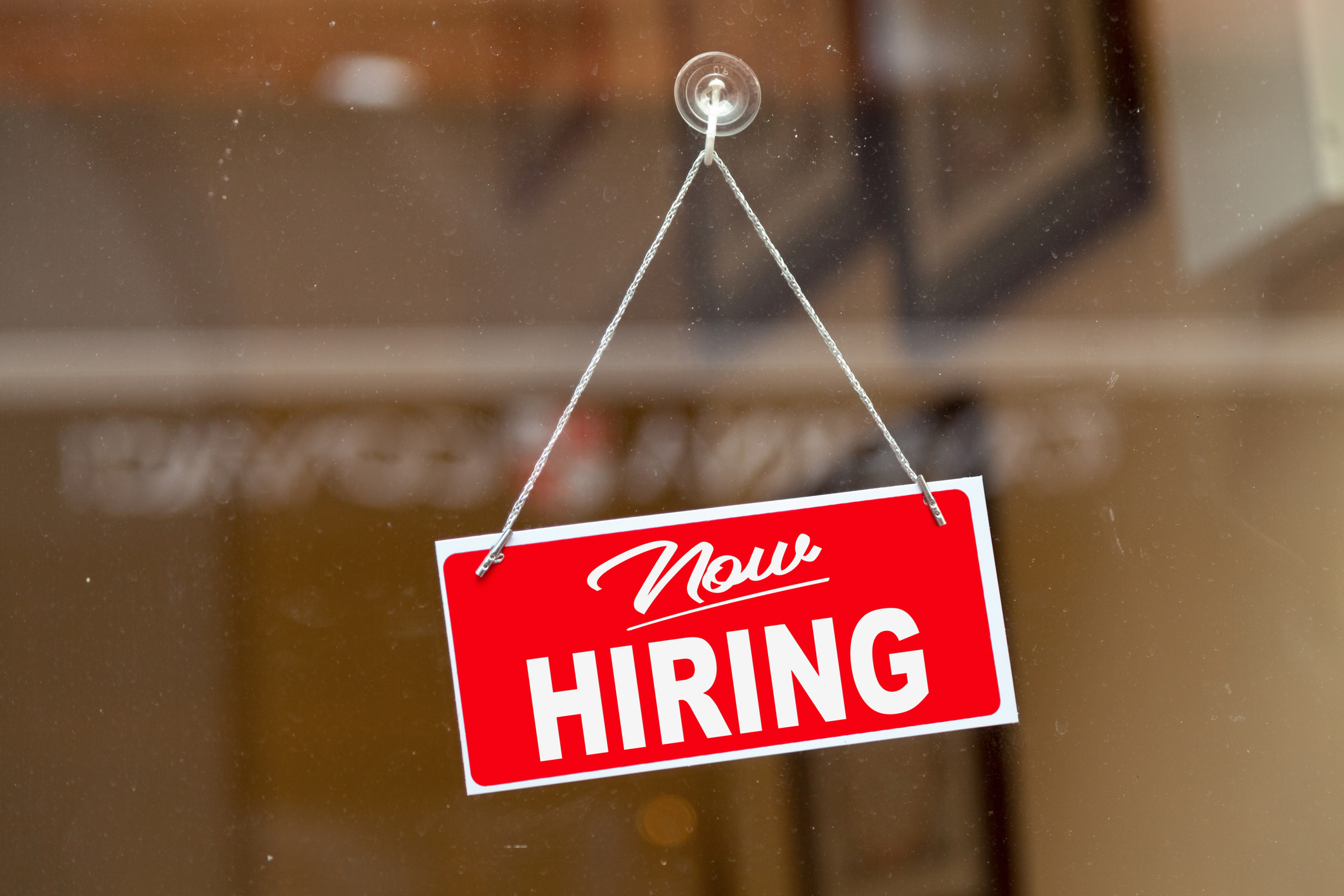 Image from iStockPayrolls increased in April and May, but at a slower clip than most economists predicted. Many businesses have been unable to attract new workers. They have offered higher wages. The participation rate fell slightly to 61.6%, which means the labor force, which includes employed people and people who are actively seeking employment, remained almost unchanged. The unemployment rate dropped because many who have been looking for a job were hired rather than people reentering to the labor force. (A person is included in the participation rate if they are actively seeking employment.) More people will need to return to the workforce before the economy has fully recovered.

Why have workers been hesitant to return when jobs are available? Many business owners and economists believe there is a disincentive to work because their unemployment compensation exceeds their wages. The breakeven income is approximately $32,000 a year. There is little incentive to return to work for those who earned less than that, especially if they are confident that they will find a job when the supplemental unemployment insurance ends in early September. Twenty-five Republican governors agree and are discontinuing the federal supplement to unemployment insurance in their states.

However, most economists disagree with the governors and business owners. The Federal Reserve Bank of San Francisco recently concluded there were “moderate disincentive effects of the $600 supplemental payments on job finding rates; this empirical framework also suggests small effects of the $300 weekly UI (unemployment insurance) supplement available during 2021.” These economists argue that the real reason jobs have not been filled is more complicated. COVID-19 changed people’s lives. The Bureau of Labor Statistics reported that 2.5 million people have not returned to work because of COVID. Parents may fear sending their children to daycare. Many schools remained closed when the surveys were taken. These people will return to work when they believe it is safe. However, they may not return to their old job. Many who lost their job found a new one. For example, warehouse jobs pay more than jobs at restaurants. Many older workers retired. It will take several months before the labor situation balances itself out, but it will not threaten the recovery.

The combination of expansionary fiscal and monetary policies should keep the economic train rolling. President Biden recently proposed an additional $4.1 trillion for programs to build the infrastructure ($2.8 trillion) and help families ($1.8 trillion). The Federal Reserve intends to continue accommodative monetary policies until the economy improves and employment returns to pre-pandemic levels. That means not increasing interest rates. Together the expansionary fiscal and monetary policies should continue increasing the aggregate demand, causing demand-pull inflation. Prices rebounded for many of the products and services that fell the most because of the drop in demand caused by the pandemic-induced cutbacks.

In many cases, these goods and services had a pent-up demand. For example, a great demand for dining out increased the price of food away from home 0.6% in May. Many people had to postpone their travel plans last year. Now that many areas have reopened, people are anxious to travel, and airline fares and hotel rates have rebounded.

Inflationary pressure is also mounting on the supply side. The pandemic prompted the shut-down of the providers of many vital components to many goods and services, which has caused elevated prices in the parts and finished products. Frequently, companies reduced production for safety reasons. In other cases, business owners did not want to increase their inventories following a reduction in the demand for their goods. Now the unanticipated increase in demand caught them flat-footed. In some cases, labor shortages have slowed their recovery. Wages have recently increased at an annual rate of 8.4%. 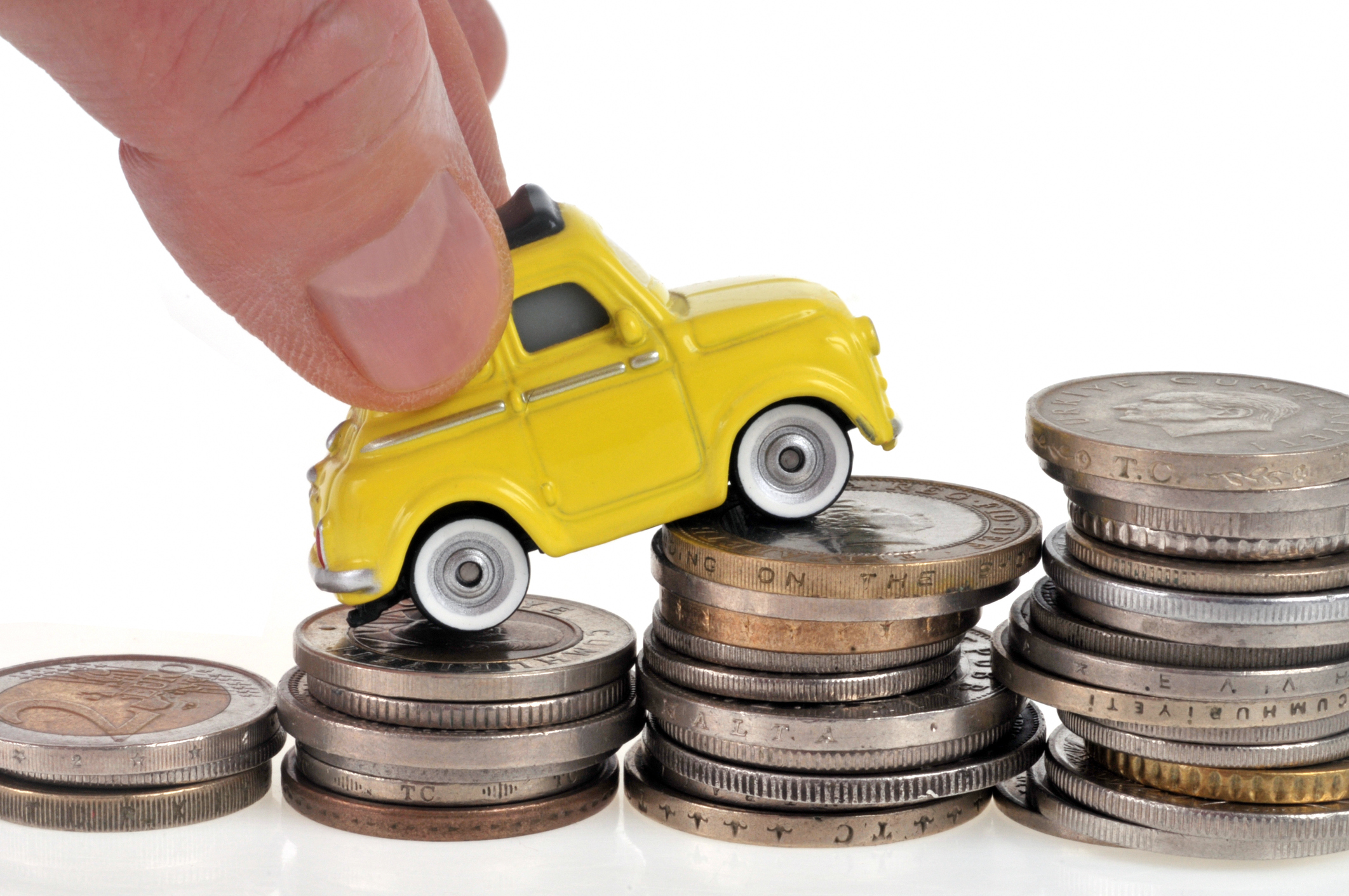 Image from iStockFor example, a shortage of semiconductors contributed to higher prices for new cars, used cars, and rental cars. The chip shortage forced several auto manufacturers to table production. Fewer cars were produced, reducing the supply, and pushing up the price. People held onto their vehicles longer, which increased the price used car dealers had to pay to increase their inventory and the price consumers paid for a used car. Used car prices have increased 29.7% in the prior 12 months. Rental companies have a limited supply of vehicles since they have been unable to replace their fleet. Some travelers have had difficulty securing a car, and if they get one, they are paying much more than before the pandemic.

Today the Fed is determined to ignore inflation until employment returns to pre-covid levels or inflationary pressures get out of hand. The risk of accommodative monetary and fiscal policies is prolonged inflation. Today’s Fed believes circumstances are very different than in 1979 when consumers expected and accepted inflation. Today, consumers expect prices to remain stable and are more apt to seek a substitute if a company increases its price. The Fed leaders believe inflation will subside when the pent-up demand recedes and the supply chain issues are resolved. They also recognize that the inflation numbers are misleading because of what economists refer to as the base effect. The significant drop in prices between March and May 2020 lowered the base, so a percentage increase appears larger than when compared to February 2020 levels. The base effect should begin to dissipate next month. However, companies will increase their prices if demand remains overheated, wages continue to rise, and supply chain problems persist. If upward pressures continue, it will put the Fed in a position where it will raise interest rates to slow the economy. Hopefully, that is after those who lost their jobs because of the pandemic have returned to work.

The future is bright. RGDP will gain momentum and increase close to nine percent in the third quarter. Service companies will thrive because people will feel safer and more places will open. Daycare and schools will reopen, providing parents with the ability to return to the workforce. Businesses will hire more workers and offer higher wages to meet the challenge of a growing demand. Higher profits will support higher incomes. The recovery will become less dependent on the unsustainable increases in government transfer payments, making the economy healthier.

Please visit our free lessons if you would like to learn more about the economy.