American consumers continue to propel the economy forward. Job security, fostered by the lowest unemployment rate in 50 years and higher incomes, have encouraged consumers to spend. Investors remain bullish on the United States economy. Stocks on the NYSE hit a record high in October. It’s remarkable the U.S. economy has shown the resilience it has, given the anemic growth of the global economy. Several of the leading trading partners of the U.S. such as Japan, Germany, China and the United Kingdom have experienced lower growth in their respective economies. While the U.S. economy remains healthy, it is showing signs of slowing to a more sustainable pace. Businesses are more cautious than consumers. They are worried the current record-breaking expansion is threatened by a weaker global economy, the impact of a trade war, and political uncertainties. The Federal Reserve shares these concerns and lowered its target federal funds rate by 0.25% for the third time in 2019 in its last meeting. Is the consumer’s perspective correct or will the business concern prove warranted? (73% of our readers accurately predicted the Federal Reserve would lower rates in our poll last month. Thank you for participating!)

With the #FederalReserve set to meet next week, how do you think the FOMC should adjust the federal funds rate?

As a reference, check out our latest #StateoftheEconomy ➡️ https://t.co/OBM1IywZVu

Below we review four publications that we believe best summarize macroeconomic trends in the U.S. economy.

The U.S. economy grew at a rate of 1.9% in the third quarter, according to the Bureau of Economic Analysis (BEA) advance estimate that was released on October 30th. The highlights are summarized below. Readers can access the report at the Gross Domestic Product, Third Quarter 2019, Advance Estimate.

Are consumers becoming more cautious? Increases in household spending has trended lower since the first quarter. Many economists are concerned this is a sign that economic growth will continue to decelerate. Consumer spending has been the primary force generating continued growth. Consumer spending or personal consumption expenditures (PCE), accounts for approximately 66% of economic activity in the United States. (Read our lesson Gross Domestic Product – Measuring an Economy’s Performance to learn more about the importance of PCE.) The Commerce Department released its report Personal Income and Outlays, September 2019 on October 31st. The highlights are listed below.

Inflation, as measured by the PCE – price  index did not increase in September, and the increase over the prior 12 months slowed from 1.4% in August to 1.3%. The PCE – price index is favored by the Federal Reserve when setting its monetary policy. September’s core price index, which excludes volatile food and energy, was unchanged. It increased 1.7% over the prior 12 months. 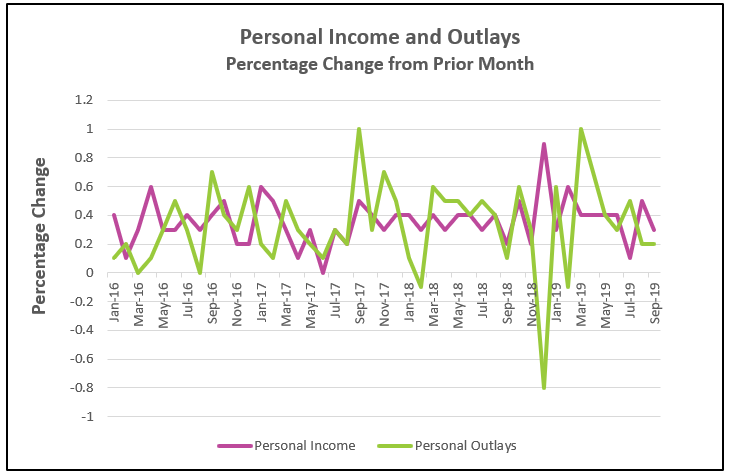 Energy prices continue to restrain inflation, according to the Bureau of Labor Statistics (BLS) October report. The CPI remained below 2.0%, while the core price index exceeded 2.0% for the fifth consecutive month. The CPI and core price index are not favored by the Federal Open Market Committee (FOMC), but they are the most commonly quoted. Both inflation measures tend to move in the same direction. Read the full report by visiting Consumer Price Index – October 2019. Here are the highlights of the BLS’s report. 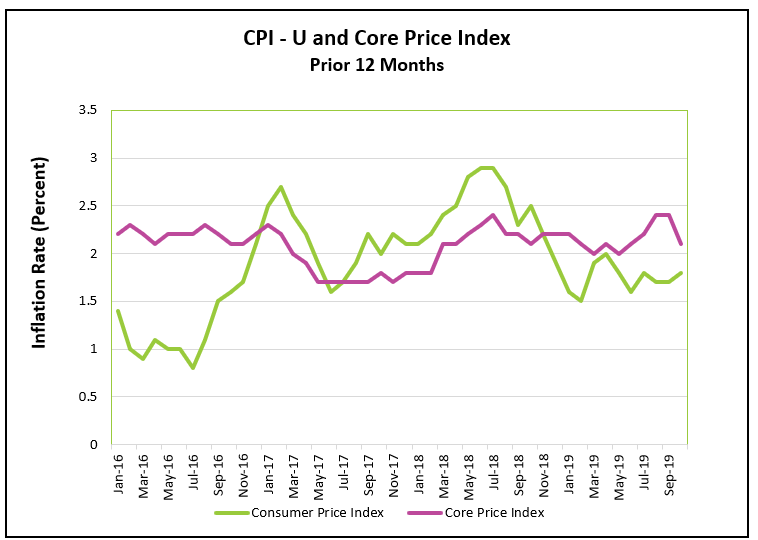 The jobs report is very impressive – especially when you consider the 128,000 increase in jobs included the 42,000 job losses from the GM strike. Furthermore, the August and September figures were revised upward. Readers can access the BLS report by going to The Employment Situation – October 2019. The report’s highlights are listed below. 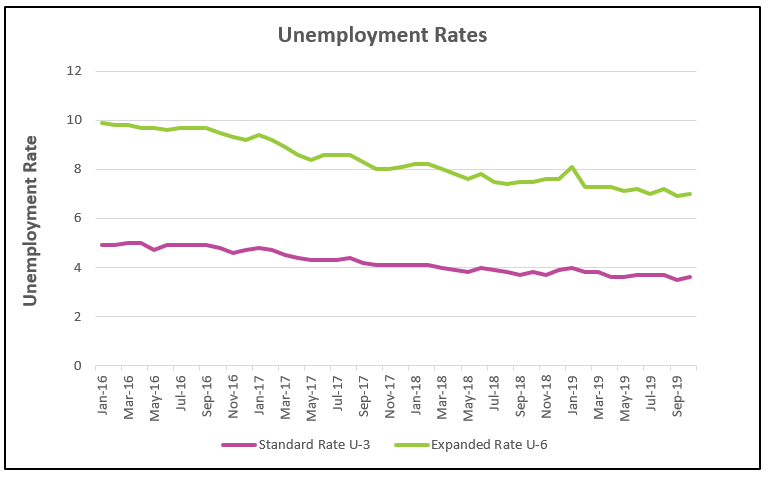 Consumers and businesses have different perspectives of the economy. Consumers remain optimistic, while businesses remain cautious. The current environment of job security combined with rising wages and low inflation have provided households with the income and confidence to spend it. Businesses are focused on the future. Managers have viewed the escalating trade war, political uncertainty and anemic global growth as threats to the current record expansion. These concerns have delayed much business investment.

In recent months, the U.S. economy has shown remarkable resilience to a plethora of discouraging news including political uncertainties, slowing global economies and a trade war because of the strength of consumer spending. The future direction of the economy depends on whether consumer optimism prevails over business caution. Businesses will eventually increase capital investment and continue to hire more workers at higher wages if consumers continue spend. Conversely, if businesses cut workers and wages, consumer sentiment would weaken, and households may delay some purchases – thereby slowing economic growth. The FOMC shares the business’s concerns. It wants households to continue spending, but it also wants business to begin investing so it lowered the target federal funds rate for the third time in 2019. The FOMC would not have taken this action if the economy were in the middle of an expansion.

It is likely that past rate decreases have contributed to the increase in homes and cars purchased in the second quarter. The Federal Reserve Bank of New York reported that household debt increased $92 billion or 0.7% in the third quarter. Automobile loans increased $18 billion. Mortgage balances increased $31 billion. Residential investment had contracted every quarter since the beginning of 2018. However, it reversed course and grew 5.1% in the third quarter of 2019!

The unemployment rate increased from 3.5% to 3.6%, but for a good reason. 325,000 people entered the work force. (Only people seeking employment are included in the unemployment rate so those entering the workforce in October were not counted in prior months.) The labor participation rate equals 63.3% and has increased 0.4% since June. Businesses continue to hire. 128,000 people were hired in September and the Bureau of Labor Statistics adjusted its employment figures. Most of these jobs have been in the service industries. In October, 157,000 people were added to payrolls in services, more than offsetting the decreases in manufacturing and government. They continue to hire, but wages have increased less than most economists would predict given the tight labor market. Why? Employees in the service industries tend to be paid less than in manufacturing. New entrants are likely to be younger and inexperienced and pull down the average.

Why then are business managers so pessimistic? Why aren’t businesses expanding? Businesses remain hesitant to invest – given the political uncertainty, trade-wars, and a struggling global economy. Business investment declined 3% in the third quarter. This follows a 1.0% drop in the second quarter. Caution is most prevalent in multinational companies because they been impacted by the slower growth in Germany, the U.K, Japan, and China. Germany recently reported 0.1% growth in the third quarter. (The Economist) The U.K. 1.0% (BBC). Japan 0.2% (Yahoo Finance), and China 6.1% (South China Morning Post). The IMF recently revised its estimate for 2019’s world output downward to 3.0% from an initial 3.4% estimate. 3.0% is the lowest growth since the height of the global recession. Trade tensions were the main reason for the downward revisions

Who will win the tug-of-war between consumers and businesses? Only time will tell, but do not discount the consumer and the U.S. economy. Stocks have reached record levels largely because investors have faith in the American consumer. The U.S. economy is a service-based economy and service companies are less vulnerable than manufacturing companies. (See State of The Economy - August 2019) The U.S. economy will continue to fare better than most world economies. Growth will slow, but the recent expansionary polices of the Federal Reserve should help maintain a growth rate of approximately 2.0% into 2020.